Going live-ish during these trying quarantimes, The Voice entered uncharted territory Monday, staging its Playoffs with coaches Blake Shelton, Kelly Clarkson, John Legend and Nick Jonas as well as the Top 17 being beamed in from their homes (or thereabouts), and Carson Daly coming to us from the audience-less set. And for the most part, it went spectacularly well. Better than most of my Zoom chats, anyway. 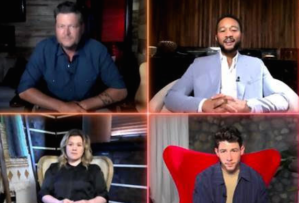 We got exceptional performances from several contenders (see which ones below) and learned whether Team Legend’s Nelson Cade III (my pick, despite a so-so last effort), Team Nick’s Michael Williams (your pick), Team Kelly’s Samantha Howell or Team Blake’s Todd Michael Hall emerged victorious in the Four-Way Knockout. And did I mention we got a whopping 17 performances? ’Cause we did. So enough chitter-chatter, let’s recap

As the episode got underway, we were treated to a performance of “Shower the People” by Mega Mentor James Taylor and the contestants that was so lovely, it boded awfully well for the show that was to follow. (And how gorgeous was that field of flowers in which we saw Team Blake’s Joei Fulco!) After that, Carson checked in with the coaches, Blake armed, as we’d expect, with a full cup, and revealed the results of the…

Thunderstorm Artis, “Summertime” — Grade: A | Oh, man. From the first note, I was on the edge of my seat. Thunderstorm was just freakin’ magic — he makes you lean in and listen closer, hanging from every magnificent note. If I were John, I’d have to have been kicking myself for letting this guy go. He’s not good, he’s not great, he’s impeccable. Dude even threw in a whistling break! Unreal. 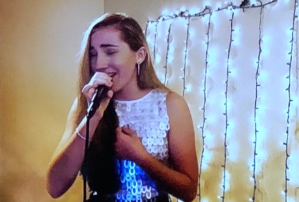 Allegra Miles, “New York State of Mind” — Grade: B+ | Well, damn. Two singers in, and this show was kicking ass. Allegra did pretty terrifically — and, unless I’m mistaken, paid a bit more attention to her enunciation than she has in the past. Maybe she got a smidgen yelly at the end, but overall, this was beyond solid.

Arei Moon, “Finesse” — Grade: A- | Now you know Arei has charisma to spare if she could make a performance at home feel like it was as much fun as a rollicking concert — and she did. What’s more, she was vocally on point. When she was done, her coach said that he was sweating, because he’d danced too much while she was singing.

Roderick Chambers, “Lost Without U” — Grade: B | Aw, I felt bad for Roderick from the get-go. His falsetto was sweet as marmalade, lilting and smooth enough to spread on toast. But I had a feeling that this wasn’t going to be a performance that resonated with viewers. Perhaps sensing that, Nick suggested (hint hint) afterwards (pretty please) that maybe (c’mon, guys) what Roderick had accomplished would set Twitter aflame. 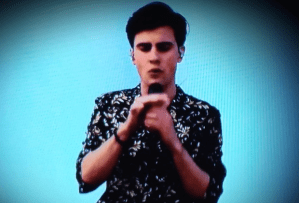 Michael Williams, “Sign of the Times” — Grade: C+ | Technically, the survivor of the Four-Way Knockout probably hit the correct notes on his Harry Styles cover. But his performance was as flat as a sheet of paper — it had no heft. It also felt as disingenuous as me saying no to a second glass of wine. I had no idea what Kelly was talking about, calling Michael “so rock-‘n’-roll.” No, Kelly. Just no.

Zan Fiskum, “Blowin’ in the Wind” — Grade: B | To borrow one of the coaches’ favorite adjectives, Zan was mesmerizing. At first, I wondered if she was going to be in trouble vote-wise since her Dylan cover was more intimate than bombastic. But then she let loose, and if she’d ever really needed to, saved herself. Kelly, possibly deeper into her wine than I was in mine, declared Zan’s rendition of the classic the best she’d ever heard. 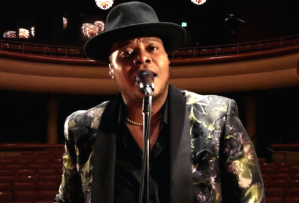 Mike Jerel, “All My Life” — Grade: B | I’ve liked Mike since the Blinds. I like the drama of him. But I’m not sure that this was the best song selection for him. Aside from a little section that allowed him to really belt and wake us up, this was mostly soppy, like a pancake that had sat in syrup a little too long.

Mandi Castillo, “Corre” — Grade: B | This might have been my favorite performance ever by Mandi. She didn’t oversing, she was just supremely present. And the vocal that she turned out was pristine and lovely. I still would never have traded Thunderstorm for her, as John did, but this was very pretty.

CammWess, “Ain’t No Sunshine” — Grade: A- | Speaking of singers John never should’ve let go; at least he got CammWess back from Kelly. His performance here was almost Thunderstorm-good. CammWess sang with a clarity and passion that gave the impression that every note was meant for your (my? our?) ears only. When he was done, John praised the standout’s “buttery” tone with an effusiveness that I usually save to describe pastries. (But honestly, his voice was that buttery!) 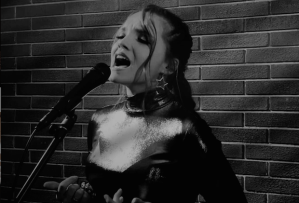 Megan Danielle, “Anyone” — Grade: C+ | Oh dear. Megan stumbled right out of the gate. She recovered, mind you. But that rough start (and OK, the end, too), I feared, was gonna cost her. The rawness that makes Megan so memorable was present in abundance, but this time, so was the lack of training that she’d so often made us forget about. Fingers crossed she’ll be who Kelly opts to save Tuesday.

Mandi Thomas, “I Hope You Dance” — Grade: C | Hmm… Unlike Megan, Mandi has tons of training. Yet she still hit some big, wince-worthy clunkers. And the overall impression that she left was [insert shrug here]. “You can sing anything,” Kelly reminded her afterwards. So, erm, why had she sung that? Got a feeling she’s gonna be in trouble Tuesday.

Micah Iverson, “Your Song” — Grade: B+ | Micah would have had to have given the performance of a lifetime to get me over the fact that Kelly let go Tayler Green instead of him. He did not. This was perfectly pleasant, though, and almost certainly strong enough to see him through to the next round. 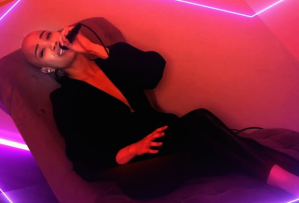 Cedrice, “Everything I Wanted” — Grade: C | Oh, Cedrice. I always want to be as intrigued by her voice as I am by her look. As usual, though, she was a little off, a little weak. Were it not for the fact that she cut such a striking figure, she would’ve been utterly forgettable. “Superstar,” her coach called her. “I don’t think that means what you think it does,” I replied to the TV.

Toneisha Harris, “Stronger (What Doesn’t Kill You)” — Grade: A- | Toneisha is the very definition of a crowd-pleaser. Her voice is like a jolt of electricity sent charging down your body through your ears. I could have listened to her Kelly cover on repeat. My only quibble is that I wanted her to go for broke even more (which probably only means that I should actually be admiring Toneisha’s restraint). 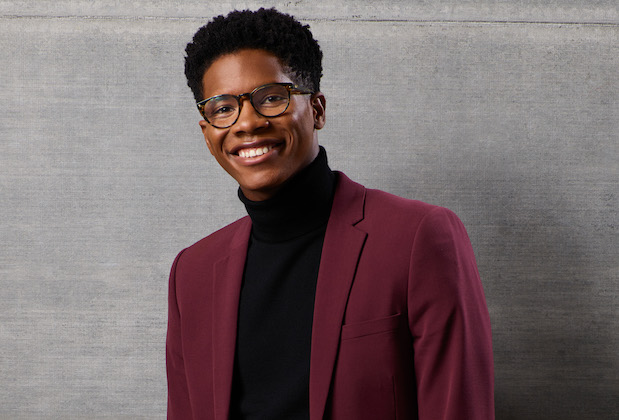 Joei Fulco, “Runaway” — Grade: B | Joei’s really grown on me since the Blinds, when I kinda wrote her off as just a Cher soundalike. Here, she was in fine voice, demonstrating impressive range and the kinda rasp that I can never get enough of. But the arrangement was a real misfire, one that I suspect is gonna put her in jeopardy during the Results Show.

Joanna Serenko, “Rich Girl” — Grade: A- | Oo, Joanna gave us major Rickie Lee Jones vibes, and I was living for it. Her Hall & Oates cover was as cool as a slice of watermelon on a hot summer day. Or, as her coach put it, “You killed it, sis.” He says that a lot, I know, but this time, he might’ve really meant it. She was a blast.

Todd Tilghman, “Glory of Love” — Grade: B | When I heard the opening strains of this Peter Cetera oldie, I suddenly became Kelly: “Oh my God, I love this song!” Once I recovered, I settled in to enjoy a better-than-average rendition of the hit. Trouble was, when Todd wasn’t, you know, Todd’ing — going absolutely wild vocally — it sometimes felt a little meh. Enjoyable but not thrilling.

So, how did you think The Voice fared with its socially-distant Playoffs? Who really wowed you? Vote in the poll below, then comment away.