We’ve known since Season 4 of Insecure premiered that Issa and Molly were headed for trouble. And in Sunday’s episode, the distance between them grew to the equivalent of… well, six feet. (They didn’t have a pandemic to blame it on, either.) What was the request that reminded us that you can’t spell “friends” without E-N-D? Read on… 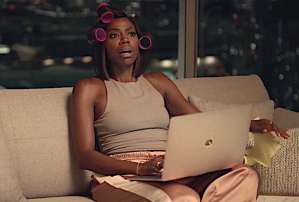 ‘SAPPHIRE, YOU A MESS!’ | Set a month before the block party, “Lowkey Losin’ It” began with Issa’s tenants storming her apartment to complain that the water was out in the building — even its manager’s place. (Side note: Is it just me? I always think I want more of Trina on the show, but maybe with her, less is more?) Issa was having problems on the block-party front, too. She needed to finalize the fliers, but Condola, off her fraught no-Thanksgiving with Lawrence, wasn’t getting back to her. (Don’t even get Issa started on her “assistant,” Sapphire!) Meanwhile, Molly had grown so accustomed to having her nose to the grindstone that she thought about work even while she and Andrew were getting down to business. At the office, her female colleagues couldn’t help but eye up young newbie BJ Bennett. Molly insisted that he did nothing for her — she used to mentor him and his little friends — but he’d definitely have had trouble written all over him if he didn’t only date white chicks. 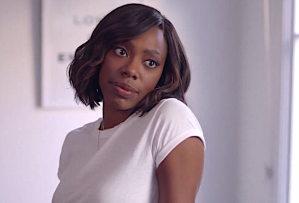 Another day, Issa and Molly reminded us of just how out of sync they were when they tried, and failed, to communicate which of them was going to take a parking spot outside Tiffany and Derek’s place. After giving up the space, Issa parked at the church next to the titty bar and listened to a message from Nathan as she walked to the new parents’ home. She didn’t have to call him back, he said. He’d just heard about the block party from Andrew and was pumped for her. Meeting up with Molly on the front steps, Issa apologized for missing their last few self-care Sundays. Molly understood; she was always working, anyway. But they still wanted to do SCS’s, they agreed… awkwardly as hell. (Lord, their friendship this season is like watching a train wreck in slow motion! “Change tracks!” I keep wanting to yell.) 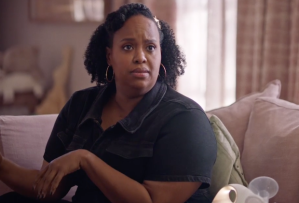 ‘IF SHE STARTS CRYING, DON’T GET MAD; SHE MAKES YOU EARN IT’ | Inside, Derek was introducing Lawrence to newborn Simone and remembering, horrified, that “before Tiff, I did some grimy s—, and all those women were daughters.” That wouldn’t happen to Simone, though, Lawrence insisted, since Derek and Tiff always planned everything out. Oh yeah? They hadn’t planned to have a baby — not yet, at least, Derek admitted. Downstairs, Issa, Molly and Kelli tried to stifle their guffaws when Tiffany told them, “I’m already over my mommy friends. They spend so much time worrying about appearances and not being real. Can you imagine?” While Kelli pondered what breast milk tasted like and whether you could Yelp-review a maternity ward, Issa joked about how very Jada Molly was being as she likened Andrew’s understanding to Derek’s support of Tiff. For her part, Molly wasn’t having it. 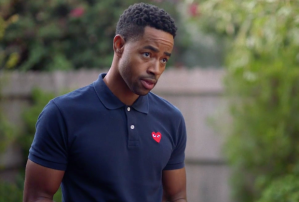 When Molly and Tiff went upstairs to visit Simone, Issa asked Kelli if she’d noticed how on her case her bestie had been lately. Had Issa slept with Andrew? Kelli asked. God, no, Issa said. Molly just… saw her like she saw her. As Issa moved off to talk to Lawrence, Molly asked Tiff if her gal pal had said anything to her. Oy. They were discussing their off-ness with everyone but each other. Outside, Lawrence and Issa’s conversation had gotten no further than their agreement that the baby looked more like Kelli than either of her parents when Issa received awful news: Her headliner had dropped out! So Lawrence never got around to telling her what he’d wanted to (perhaps that he and Condola were done?). Returning to the ladies, Issa said she had to go handle some s— — as Molly spied Lawrence leaving and assumed that he was the s— she was gonna “handle.” Later, Issa tried in vain to find a new headliner. “Remember when we said your son would grow up to be a star?” she said on one call. “Did he?” 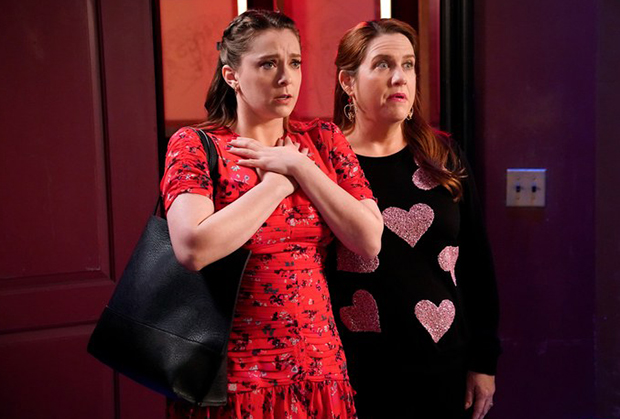 ‘WE’RE NOT IN THE HONEYMOON PHASE ANYMORE’ | That evening, Molly was surprised to learn on her date with Andrew that he’d made plans with his boys for later — he’d just assumed that she’d have to work after dinner. They continued their date, but now awkwardness was on hand like a third wheel. The following day, Issa called, brightening Molly’s mood by saying that she really wanted to talk. Only she didn’t want to talk-talk, she wanted to use Andrew’s connections to get her a new headliner. So couldn’t Molly “work that pillow talk” for her? OK, said Molly… understandably reluctantly. That night, Molly apologized to Andrew for not making him more of a priority and admitted that this was new to her — usually, by this point in a relationship, she’d have screwed it up. Not this time, though; they kissed (and then some) and made up.

Afterwards, Molly phoned Issa to say that she hadn’t talked to Andrew about a headliner and wouldn’t be doing so. “Did y’all break up?” asked Issa. “No,” Molly replied, “I just think it’s best to keep those parts of my life separate” in order to protect this relationship that was important to her. Makes sense, right? “Well, I got work to do,” said Issa, “so… ” So. Not. Cool. You’re better than that, Issa. As the episode came to a close, Issa was so bummed, she didn’t even want to talk to her mirror self, she just wanted a shower… which she could take if she didn’t mind water the color of mud. So, what did you think of “Lowkey Losin’ It”? How aggravated are you with Issa and Molly for just not communicating? Do you predict the season will end with an Issa/Lawrence or Issa/Nathan reunion?