Warning: The following contains spoilers for Sunday’s Season 4 premiere of Insecure. If you’d rather watch first, read later, move along.

Insecure besties Issa and Molly have split up before. But there was something different about the estrangement that was foreshadowed in Sunday’s Season 4 premiere of Issa Rae’s pitch-perfect dramedy. Before the episode flashed us back to four months prior to the block party that Issa was organizing, she told someone on the phone that “honestly, I don’t f— with Molly anymore.” And it seemed not just sad but… ominous. Now that could’ve just been because Issa was watching the true-crime show Looking for LaToya at the time. Or maybe something big really did go down? What? Let’s search for clues among the intel that we gleaned from “Lowkey Feelin’ Myself.” 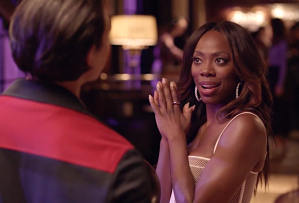 ‘IF YOU WERE A DRESS, I WOULD KEEP YOU’ | As the episode began, Issa and Molly’s Self-Care Sunday — which consisted of getting high and doing yoga — afforded us quick updates on the pals. Issa had “no job, no man… ” Uh, yeah. Even as she said it, she realized that “all this sounds bad, but it’s actually good.” (And Issa did have a man, if only for recreation — a big fella referred to as TSA bae, owing to his job as an airport screener.) For her part, Molly was being run ragged by work and having fun —just fun, she insisted — with Andrew. Later, while the girlfriends were shopping for clothes that Issa could wear to a mixer for potential block-party sponsors (then return), she admitted that she felt outdone by new pal Condola, who was recruiting huge brands. Who had Issa gotten so far? Uh, “Wayne from the Popeye’s on Centinela.” Why, she wondered, had she ever thought she could do this? “You’ve planned events before,” Molly pointed out. “You’ve raised money. Yes, this is on a bigger scale, but bitch, you weigh more now.” (Insert record-scratch sound.) “I don’t like that metaphor,” Issa replied, “but I appreciate your energy.” 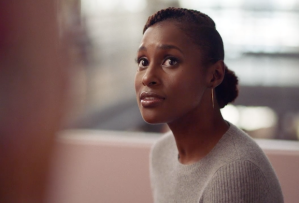 Before their shopping spree ended, Molly asked Issa whether she should tell Andrew that Nathan could come to the mixer. Mm, nope. (Bummer. I liked Nathan, at least before he ghosted our girl.) Shortly, Issa and Condola’s mixer meeting in the latter’s swanky office was interrupted by a very-preggers Tiffany, who was stunned to learn that her colleague was still dating the man she’d met at her baby shower: Lawrence. “It’s fine,” said Tiffany, willing it to be. But once Condola and Issa found out one another’s connection to Lawrence, it seemed anything but. (In fact, Issa found herself suddenly picturing Lawrence and Condola going at it all over the baby shower. “I bet you own all your clothes, don’t you?” he told his lover. Oh yeah, baby, “pop the tags!” she replied. Hilarious.) That evening, though Lawrence assured Condola that things were cool between him and his former longtime girlfriend, she bailed on their date to “process” this new information. Next thing we knew, the day of the mixer had arrived. Since it was being held at the apartment complex Issa manages, she’d let the tenants know. But “when I said residents are welcome,” she informed Trina, “I was just being polite.” 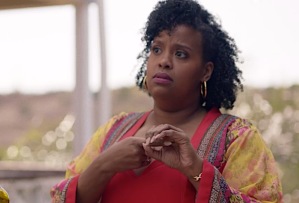 ‘RELAX, URBAN OUTFITTERS’ | When Condola arrived, things between her and Issa remained as awkward as hell. But they still managed to throw together the mixer, with Ahmal DJing and Kelli bartending (and receiving an Indecent Proposal from an older guy!). During a moment alone with the heavy pourer, Issa asked what she’d do if an amazing new woman friend was dating her ex. That actually happened to Kelli. (Of course it did!) “She’s in jail now. I framed her,” Kelli admitted, “but we still right.” (Oh Kelli, I’ve missed you!) Later, Issa tanked the mixer in… good Lord, ways I didn’t even know existed. She and Condola accidentally talked over one another constantly in front of potential sponsor Sheryl, to the point that Tiffany was like, “This is like watching a live conference call, and I can’t take it.” Then Issa went around telling all the bigwigs anything that they wanted to hear about the block party. By the time Molly arrived, reeling from the revelation that Andrew was seeing other people — as he thought she was — Issa was desperate. “Can you do that thing,” she asked Molly, “where you make white people laugh and they give me money?”

Just when you’d have thought that the mixer couldn’t go any further south, Ahmal took a request from Trina to play a song whose lyrics I couldn’t type here without using a lot of dashes, and one of the porta-potties broke. Finally, Issa took control of the situation and gave a heartfelt speech about why she felt the block party was important. That earned her a thumbs-up from Trina, Sheryl’s respect and triple the event’s number of sponsors. As the mixer wound down, Molly had Andrew leave without her… in a way that felt like a gentle breakup. When she told Issa, her pal challenged her to stop fronting — she knew that Molly was really into Andrew. If they were gonna be all honest, then Molly wanted to know what Issa was doing being friend’s with her ex’s girlfriend. “You know, your life doesn’t have to be this messy,” she said. And OMG, that was rich coming from Molly, of all people. But at least she held herself accountable for her own actions, and bravely texted Andrew that she liked him as more than fun. While she waited for his response, Condola showed up on Lawrence’s doorstep and answered his question — “So are we good?” — in bed.

So, what did you think of the Season 4 premiere? Any theories about what could’ve gone down between Issa and Molly? Grade the episode below, then hit the comments.