This week’s Law & Order: SVU wasn’t supposed to be the procedural’s Season 21 finale. But if you didn’t know that ahead of Wednesday’s broadcast… you might never have realized.

“The Things We Have to Lose” was supposed to have been followed by four more new episodes, one of which — showrunner Warren Leight told TVLine exclusively — would have seen the return of former squad member Elliot Stabler’s wife, Kathy, and their troubled son. His family members’ appearances then would have teed up the recently announced Stabler-centric SVU spinoff led by former cast member Chris Meloni.

But when production shut down in March following the coronavirus outbreak, this week’s episode was the last one completed. As far as season finales go, it’s not too shabby. The hour revisited four cases from earlier this season. Two were from “At Midnight in Manhattan”: Leon Fuller’s domestic violence arrest and subsequent incarceration, and transgender prostitute Lakira Beca’s attack by a john. Ivy Bucci, the cop’s daughter who became a plaything of the now-dead Steve Getz (“Can’t Be Held Accountable”), also showed up. (We’ll get to all of them in a moment.) 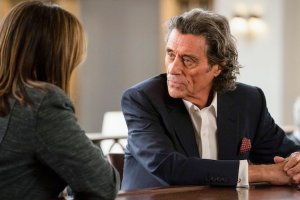 But the hour’s primary story was the start of the trial of Sir Tobias Moore, the media mogul accused of rape and sexual harassment in the Season 21 premiere. At the start of the finale, Carisi was more than ready to get into the courtroom and take Moore down. But the wealthy defendant and his legal team used every possible trick — including witness intimidation and the claim that Sir Toby was in too ill health to be tried — in order to stall the proceedings. Meanwhile, his victims started to pull their testimonies, not wanting their reputations, friends and family to be destroyed by Moore’s smear campaign and menacing tactics.

Eventually, though, it came time to pick a jury… and then Moore’s lawyer announced to the judge that her client, who was absent from the courtroom, had suffeed a “cardiac event” and was being rushed to the hospital. Carisi exploded that the move was even more of a stall, but his objection did nothing to move the trial along. Later, Rollins swung by his office to get a drink, but a dejected Dominick turned her down. 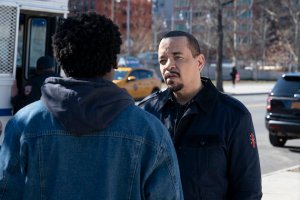 * Fin worried that a newly released Leon would violate the restraining order keeping him away from Joelle and their son, Andre. So he gave Andre a burner phone to use just in case Dad showed up… which he eventually did. Fin walked into the apartment to find the man holding Joelle at knifepoint. When he went to turn the weapon on Andre, Fin fired his gun and killed Leon. 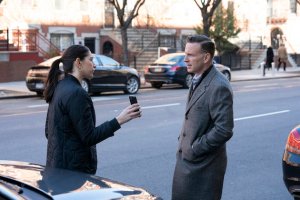 * Lakira told Kat she saw the john who attacked her — aka Steve Getz’s former attorney, Paul Davies — and that he’d raped another transgender sex worker who eventually died from her injuries. Davies denied the allegations but when DNA linked him to the crime, Kat arrested him.

* Ivy’s drug use and disregard for her mother’s rules led Rollins to arrest her for doing cocaine at a bachelor party. But Ivy cried and said she’d set herself straight, so Rollins let her go… only for the teen to get arrested soon after for similar behavior. Off some advice from Benson, Rollins let the girl spend the night in a holding cell before vouching for her before a judge, who warned her that this was her last chance to mend her ways.

TVLine spoke with Peter Scanavino, who plays detective-turned-assistant-district-attorney Dominick Carisi, about the abrupt end to SVU‘s season, that Rollins/Carisi interlude and how he thinks the newest ADA would get along with Stabler… y’know, if they ever were to meet.

TVLINE | Sir Toby’s trial is Carisi’s first big swing on his own, right?
Well, it’s interesting because, as he states in the beginning of the episode, they’re letting him take the lead on this. I think it’s kind of a nice button, because he’s kind of proven his worth and that he is capable in this job. So it’s nice that we started with the case where he didn’t know what was going on. It was his first thing… But [the District Attorney’s office] also gives it to him. So if it goes wrong, you know, they can all wash their hands of it. He’s going to be the scapegoat if it goes south. It’s high stakes.

TVLINE | In your mind, is he raring to go? Or is he worried?
He wants to get in the ring. I think he’s really chomping at the bit, and also he’s so frustrated, in this case in particular, because of all the delays and the hurdles that he’s having to jump to get this going. Meanwhile, all the witnesses are waiting. Their lives are on hold. They’re, you know, having a hard time dealing with this… You can see at the end, he has a bit of an outburst.

TVLINE | Your season ended before it was supposed to. Do you know if the Sir Toby case would have been revisited again this season?
God, I don’t know, because it just kind of ended, you know? …But in terms of a finale, like I said before, this is kind of a nice button on the season because it is what we started with. Coincidentally, that’s how it worked out, you know?

TVLINE | Yeah. While watching, I couldn’t help but think about what the Rollins/Carisi ‘shippers are going read into that scene where she comes to his office.
In that moment, Carisi’s making a decision that however he feels or whatever, that this isn’t necessarily a good thing to pursue at the moment. It leaves him vulnerable. You know, he’s got other things to worry about now. So that was kind of a real thought moment when she comes in and says, “Let’s go get a drink.” He says no, and I don’t think it was because he had so much other work to do. [Laughs] I think he was protecting himself emotionally.

TVLINE | Did you see any of the scripts for the episodes that got scrapped?
Yeah, I saw one, and we shot, like, one day of it, and then that was it. God, you know, even thinking back… Right now, I’m thinking, “I wonder what that show was about?” It’s like a different world. It’s a different life. It’s so strange to watch. I watched the episode last week, and it was almost as if it was a completely different version of myself talking from this other world that doesn’t exist anymore. You know what I mean? It’s so strange. So strange.

TVLINE | I know exactly what you mean. So Warren had said that Stabler’s wife and son were going to show up toward the end of the season and set up the new Stabler spinoff. Given what you know about the character of Elliot Stabler, how do you think Carisi and Stabler would get along, if and when they ever meet?
God, I don’t know. [Laughs] You know what I mean? I don’t know. God, I never even thought about it. How would they get along? I guess I’d like to think they’d get along pretty well, but [Stabler is] obviously a bit cantankerous and can be kind of gruff. And I think Carisi’s not necessarily like that at all, but I also don’t think he responds well to that type of personality. So maybe there would be some tension there.