The Masked Singer is really gonna keep trying to make “Battle of the Sixes” happen, eh? OK then.

This week’s episode was the lead-up to next week’s Top 6 showdown, which meant that Banana, Kitty, Frog or Rhino was going to be sent packing at the end of the hour. When the evening was over, Masked Singer voters (if that’s even a thing) weren’t feeling the peel: Banana wound up getting sent home.

You’ll find out who he was after we briefly recap the performances: 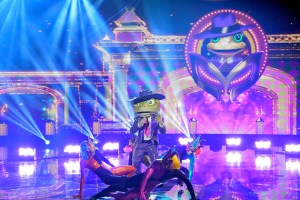 FROG | I have to give it to Frog: Usually, Masked Singers who can’t sing and who make very little attempt to do so make me kinda irate. But, as he mentioned in his set-up package, he’s very aware that he’s one of the weaker vocalists this season, so he tries to make up for it with highly entertaining numbers — and I always dig that. (Though Pitbull’s “Fireball,” which relies so heavily on its instrumental hook, is pushing it a wee bit.) Again, this week’s clues were nearly all visual ones, so I’m just going to list them: A keyboard, Japan, sneakers, an ice cube tray missing two cubes and a luggage tag reading “Thank God It’s Frogday.” (My guess: CSI: Cyber‘s Shad “Bow Wow” Moss)

KITTY | The truly gorgeous cover of Cyndi Lauper’s “True Colors” that the furry feline turned in this week was perfection. Even more impressive, as judge Robin Thicke pointed out, was that Kitty has shown the greatest stylistic range of any contestant this season. Clues: a dragon, an angel, a religious headdress called a mitre, a mouse (or maybe a rat?) and a tag that reads “If found, call me?? Be a hero.” (My guess: America’s Got Talent alum Jackie Evancho) 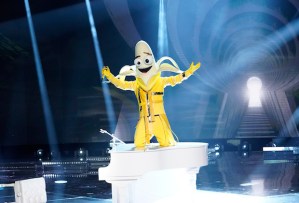 BANANA | It’s no wonder that the fruity dude left after this performance, given how easy it was to identify his voice from the very first notes of Bob Dylan’s “Knockin’ on Heaven’s Door.” Even guest judge Sharon Osbourne knew right away: “Bret Michaels!” she said to judge Ken Jeong during the first chorus. Clues: a cat (or, as judge Jenny McCarthy Wahlberg pointed out, a “catscan”), bug spray (or poison, per Thicke?), lips with tongue out, backstage crew tag, Nashville sheriff badge. (My guess: Poison frontman Michaels.)

RHINO | You could plane a coffee table with Rhino’s performance of “10,000 Hours” by Dan + Shay and Justin Bieber, it was just that smooth. The song also was a good reminder: Rhino is so much better when he’s being himself, riffing off the audience’s energy, than when he’s in a highly produced and choreographed number. Clues: a Christmas stocking full of coal, a Tennessee flag, a bass clef, a tag that says “RhiNO Secrets.” (My guess: Former Major League Baseball player Barry Zito)

THE UNMASKING | Banana was chosen to go home. When he was unmasked, he was revealed to be Michaels. (Go here to see what the rocker had to say about his costume, his lyrical flub and fate.)