Just like every rose has its thorn, every episode of The Masked Singer must end with one of the costumed competitors doffing his or her helmet-like mask. And at the end of this Wednesday’s show, Banana had to split. (Read a full recap of the episode.)

The singer inside the big yellow fruit suit? Poison frontman/Celebrity Apprentice winner/Rock of Love star Bret Michaels — who tells TVLine that his years of touring with his rock band couldn’t prepare him for this specific flavor of surrealism.

“The first episode where we were getting ready to come out on that stage — I mean, I always get excited to perform — but my heart was pounding,” he says, laughing. “I had a moment where I thought, ‘My god, I’m a human banana.'”

We spoke to Michaels from his home during the coronavirus quarantine, where he’s got a lot going on. His book, Bret Michaels: Auto-Scrap-Ography, Vol. I, is coming out in May. He’s been engaging in a variety of home-improvement projects, backyard concerts and go-kart rides. When we spoke, he was (naturally) a bit preoccupied: His mom, Marjorie Sychak, had undergone pacemaker surgery the day before. 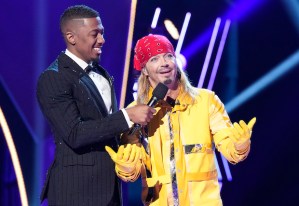 TVLINE | Before we get to Masked Singer stuff, how is your mom doing?
First of all, thank you for asking that. She’s doing very good. I called her twice yesterday after the operation and then this morning. She’s really doing good… My mom’s a fighter, and she’s in good spirits for someone that should be not feeling too well, she seemed in good spirits. Thank you for asking. That means the world to me.

TVLINE | It’s a scary thing under normal circumstances, then you add on our current circumstances — plus having to answer silly questions about The Masked Singer on top of that.
We will make this so much fun. I want to say this: I’m all about staying mentally positive and then the rest falls into place. These are actually fun interviews. Like The Masked Singer. I’ve said this to everybody: It’s a show that I’ve watched. I watched with my family, my kids. Doing it, besides exciting, it is the most surreal experience. It’s the only time in life you’re completely, for me, I was completely in and completely out of my comfort zone. I was a human bandana banana. [Laughs]

…Everyone I’ve worked with there — and I’ve worked on a lot of different reality TV and different shows — everyone there treats you great. But it is, without a doubt, like the Secret Service. I’m thinking to myself the whole time, “There’s no way you can hide this.” I’ve never seen a show take so serious the hiding of your identity. That was the most painful part for me, because I’m a handshaker, hugger, talker, how you doin’? And I’m walking by everybody on the crew, and I knew them from other stuff, I’m thinking, “I’m a real-life Spider-Man. I’m Peter Parker and I can’t tell nobody in this outfit!” [Laughs] I want to walk up to them, give them a big hug, ask them how the family’s been. And they’re walking by me, you feel like a ghost. There’s no talking, no contact. It is surreal. 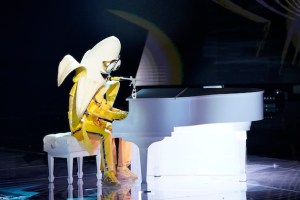 TVLINE | I’m wondering what 1990 Bret Michaels would think if he knew that in 2020, he’d be singing in a banana costume and loving it.
[Laughs] Now you remember, in my career, we’ve had not only many years of playing — if the world ever goes back to almost-normal again, to be able to go out and do the stadiums that long into it, and just remember, we were announcing I was playing solo shows and then I did a… I love having a great time. This may have been one of my actual outfits at a backstage party in the ’80s. [Laughs] I think I may have worn this outfit on one of my let’s just say good, insanely wild nights. It may have been a good night in Minnesota, if you know what I mean. [Laughs]

TVLINE | Were you always rocking a bandana under the mask?
Always. Listen, that’s my power. That’s my energy. Brings me good mojo… By the way, I hope you’re safe and healthy and doing well.

TVLINE | You’re like, “You’re in an epicenter. How’s that going?”
[Laughs] I was just gonna say!

TVLINE | You had a moment when you were performing “Achy Breaky Heart” that you forgot the lyrics, and in a subsequent clue package, you mentioned that it was a byproduct of some health problems you’ve had. Has that happened to you in concerts, as well?
Let me answer that in two phases. Number one: Absolutely in my real life since the brain hemorrhage, which, are you ready for this — how ironic on this show, this is my life coming together, all of this by the way, I’m not going down this road but in my autobiography — or auto-scrap-ography, volume I — this is all in there. All the moments of my life. I handwrote this myself. Every moment of impact and the pictures to prove it. Here’s what I was going to say: Today marks the 10th anniversary of the survival of my brain hemorrhage. I mean, how ironic is that on the same exact night as [my leaving] Masked Singer?.. The universe is incredibly awesome, how it all came together. I’m playing “Knocking on Heaven’s Door,” sitting at the piano, in my Banana outfit, marking the exact timeframe that this airs when I was getting my brain operated on. That universal moment of all that coming together, singing that song, how ironic is that?!

… But leading it back to the show, I am such a fan guy. I said, “Put me out there. Let me start in the crowd.” … Well it got super late and they put me out in the crowd during “Achy Breaky” and I’m trying to sing in a voice that’s not mine so it’s not recognizable and as much as I love the song, I’ve never performed the song ever in my life. So all of a sudden you get out there and the crowd’s slapping — I’m telling everyone, “Feel the peel!” — so while I’m messing around, having fun with everybody, the song started. I’m going, “Uh-oh!” It wasn’t a matter of forgetting the lyrics. I was singing the chorus twice. So I immediately went into survival mode. Waited for the second beat of the chorus to come around, I got everybody clapping their hands. I give full credit to the dancers and the choreographer — who, by the way, after that gave up on me. [Laughs] I say that to protect him… The second I got out with the crowd, my legs took on a life of their own.