Oooh, so that’s how it is. Coming into focus in Sunday’s Insecure were the issues that were obviously going to lead to the Issa/Molly rift that Season 4’s premiere foreshadowed. What were they? Read on… 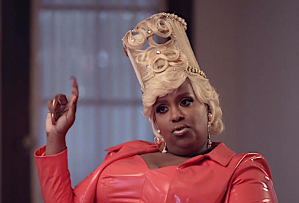 ‘P—-Y ON PAUSE’ | As “Lowkey Distant” began, familiar Lawrence-related awkwardness crept into Issa and Condola’s tour of the site for the block party — you know, the block. So the fast friends slammed the brakes on that s—. They worked and vibed too well together to tolerate the encroachment of any bad energy. Or, as Issa put it, “I am not about to let someone who puts mayonnaise on his French fries make things weird!” And just like that, a weight was lifted from their shoulders. Later, Issa was hanging at Tiffany’s on Halloween when the impossible happened: Molly managed to distract from Kelli’s costume (as Halle Berry’s Nisi from B.A.P.S., TVLine reader Jordan points out), which included a wig that threw her off balance and nails that were so long, “I’m gonna need one of y’all to wipe me.” Kidding aside, Issa and Molly hadn’t caught up in a minute, and the latter had a big announcement to make: She was, in Kelli-speak, putting her “p—y on pause” in hopes of getting more from Andrew than a strictly physical relationship. 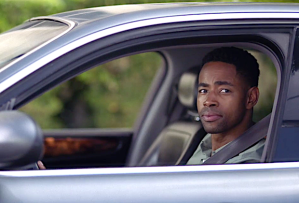 Though that seemed to be all that Issa had with “TSA bae” Gabe, she didn’t appear to mind. Much. Until his condom went missing during a hookup. As Issa retrieved it in the bathroom with the help of a hand mirror, her reflection judged her harshly. “I’m not mad,” said Mirror Issa, “I’m disappointed.” Ouch, Mirror Issa. It happens! When next we saw Lawrence on a date with Condola, she laughed when he ordered mayo for his fries. He did not laugh when she admitted that she and Issa had discussed him. But not, you know, “like that.” Oh, OK. That was fine, then, he insisted. Except it wasn’t fine at all, he told pals Chad and Derek. Lawrence had better be careful, said Chad (arguably the funniest character this side of Kelli). “They’re gonna start a podcast about your d—.” Lawrence felt cornered by the sitch: He had to be sensitive to Condola but also couldn’t seem petty to Issa. If only when he’d dumped Issa, he’d done what Derek did. “Every time I break up with a girl, I move,” he said, adding, “I miss Dallas.”

‘A GUY WITH DEPTH’ | When Molly showed up at a restaurant for dinner with Issa, she was surprised to find Condola there, too. Oh, and thanks to Issa’s invitation, Condola was staying, which put a big-ass cork in Molly’s plans to unpack her Andrew baggage. Of note: This was not a long scene, and it didn’t have to be to make clear just how much Molly was feeling like a third wheel. Not only did Issa practically fawn over Condola, they didn’t even share their damn menus with Molly! The next day, Lawrence dropped by Issa’s to ask if maybe he didn’t have to come up in her conversations with Condola. So don’t tell Condola that Lawrence is his middle name? Yeah, no, said Martin, who I promise never to refer to as such again. When Andrew arrived at Molly’s for their all talk, no action date, she struggled with both his amorousness and her gumbo. “I ain’t making another roux,” she said when she realized that he was right (too salty). “We just gonna have to die.” Sadly, the date went south fast when Andrew proved to be as reluctant to open up about his family as he was to talk about his job. “I wanna date a guy with depth,” said Molly. So sue her. “Wow,” huffed Andrew on his way out, “everything is an issue with you.” Damn, he’s even harsher than Mirror Issa. 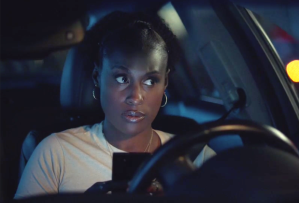 While waiting for Condola to arrive for Schoolboy Q’s concert, Issa called Lawrence to ask if she should mention that they had talked. No, he said. It was no big deal. (Oh man, you could see the big deal coming a mile away… ) During the show, a tearful, wine-soaked Molly tried to reach Issa but only got an “at loud concert” text back. At the office another day, Molly actually seemed to be taking her self-care to heart. After biting her tongue in a meeting, lest she seem negative to what Taurean was doing, she apologized for their past issues. And though “huffy” seemed to be his default mode, the scene did play like a kind of new beginning. Barely, but hey. Speaking of self-care, when Molly and Issa went on a hike, the latter suggested that the former created her own problems in relationships. “Aren’t you tired,” asked Issa, “’cause I’m tired for you?” Just then, Molly got a call from Andrew. Not only did he apologize for the date gone wrong, he admitted that he found it hard to open up. However, if she’d give him some time… That, she said, she had. Tellingly, Molly wrote off the call as nothing, just work, rather than confide in Issa. And Issa never had a clue. She just began prattling on about how she’d had to drop TSA bae because “Plan B was becoming my Plan A.”

So, what did you think of “Lowkey Distant”? Is a part of you hoping that when things blow up between Lawrence and Condola, he and Issa will give it another go? Or has that ship sailed? Hit the comments.