Fraser’s Ridge is temporarily renamed in Sunday’s Outlander: May I welcome ye to Main Pain Central?

I kid, but there are a lot of sad boys in our little corner of North Carolina this week. The hour finds Jamie processing his grief for Murtagh, Roger — who lives! — suffering post traumatic shock in the wake of his hanging and Ian (!!) returning to his family after a mysterious and painful parting of ways with the Mohawk.

Much of “Famous Last Words” is spent with Roger and Brianna as she coaxes, pleads with, wheedles and eventually orders her husband to start engaging with the world again. But MacKenzie can’t bring himself to do so, and he’s really disinterested in trying out his voice again (even though Claire says he’s medically ready). Though it’s been three months since the Battle of Alamance, Roger is still having waking nightmares about dangling from the tree. And aside from an anguished croak when he dashes to stop little Jeremiah from touching a boiling kettle, Roger hasn’t made a peep in weeks. 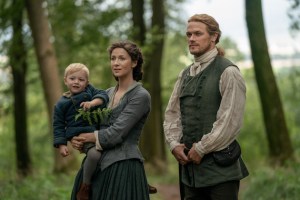 When Ian comes back to his family, all tattooed and manly but also haunted and taciturn, Jamie can’t figure out what’s up. So he sends his nephew off to survey a new plot of land — Tryon’s “Sorry for nearly killing you” gift to Rog — and has MacKenzie accompany him. While they’re gone, the two men bond over their losses, though it’s still not 100 percent clear what happened to Ian. Whatever it was, it was sufficient enough to push him to try and commit suicide during the trip.

Roger stops the younger man from drinking hemlock tea and uses his rusty voice to suss out that something not-deadly-but-still-terrible took place regarding Ian’s wife. When Ian dejectedly says he doesn’t know what to do, Roger rasps, “Then pick up your weapon and come home with me until you do.”

Back at the Ridge, Bree is overjoyed to hear Roger’s voice again. But he makes sure that she knows he’s no longer the same man. “Even though I was saved, a part of me died that day,” he says, and Bree — also a victim of violence — knows what he means. Still, he says that her face was the last thing he saw before he kinda-died, and promises “I’ll always sing for you, no matter what, no matter where, whether you’re there to hear or if my voice is able: I will always sing for you.”

In a moment, we’ll hear what Sophie Skelton has to say about Brianna’s “tough love” approach to bringing Roger back to himself. But first, a few more observations about the hour: 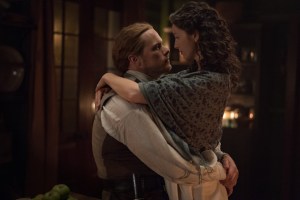 * As good as Sam Heughan was at showing us Jamie’s incredulity over Murtagh’s death in the previous episode, he’s even better at playing Fraser’s sad acceptance of the loss. I particularly loved his exchanges with Jocasta (not being a wife or son of the dead “doesna make the pain any less, or easier to bear,” he sadly tells her) and Claire (“Is there a medicine for grief in your time?”). Just lovely.

* Welcome back, Young Ian! How cool to see the difference in the character since he first went to live with the Mohawk. (And if you have a moment, rewind to the dinner scene and watch Claire and Jamie have a rich, wordless conversation about Ian’s new weirdness via their eyebrows alone.)

* Oldlanders, this one’s for you, but I’ll speak in code for those who havena read the books: Anyone else wondering if Ian’s suicide attempt will replace the one that [Spoiler] makes in A Breath of Snow and Ashes?

Read on for Skelton’s take on the hour. 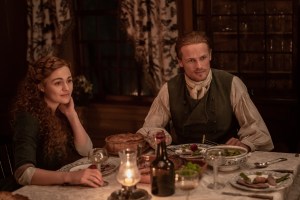 TVLINE | What I love about Brianna in the books is that she’s kind of a hothead. In the show, Bree seems a little bit more even-tempered — but I enjoyed watching her get mad at Roger in this episode.
Yes, and that was something I really wanted to go there with. Because I do feel like a lot of the time, I have to protect Bree, because I do think that she has a lot of bad press. I always say, ‘She’s a Fraser. She is hotheaded, she has a temper, and she feels things very deeply which often can come across as anger or upset or maybe some people sometimes think that it’s kind of a misplaced upset or anger or whatever. But I always say I think while that shows on an 18th-century outlander, Jamie, as quite sexy and moody and angry and whatever, on Brianna, everyone just calls her a brat. [Laughs] And it’s like well, she does have feelings and she’s showing them. Like, you know, leave her alone! [Laughs]

In that scene when she sort of lays it on Roger, I really wanted to go there… She has been so patient for months now. Brianna is still suffering PTSD, but she puts on a brave face for her family. That’s not something that Roger’s asked her to do, but she’s doing it. She has to get up every day and she has to look after Jemmy and she has to do everything else and the fact that now she is the one looking after Roger, I think there’s a little bit of, “Come on, dude. I’m going through something, too.'” 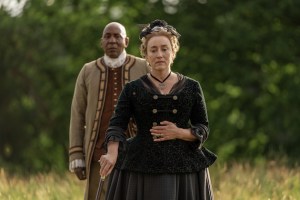 TVLINE | It’s not even like she gets a huge amount of comfort that he’s not dead, because he still seems like he’s gone once he comes back and heals.
When they find out he is alive, she doesn’t get this moment of joyous relief with him so much, because he’s not back, really… We had the Murtagh funeral scene — all of those were actually in that originally, and we did a whole scene there with us all around his grave and laying stones for him and everything. Roger was in the scene, and when [the behind-the-scenes crew] looked back at it, they said actually him being there looks too engaged. We really want to show how disengaged he is and how little time he’s spending with the family. He’s just locking himself away and turning himself off from the world.

TVLINE | When Roger does come back to himself, it seems like this may be a new, albeit terrible, bond for them: They both have lived through incredibly violent acts. Is this something that will unite them further as we continue in the season?
Yeah. One thing I love about this season is that everything Bree and Roger are going through now, these things make them stronger… Every time they have these fight,s they actually build on it and they get stronger and they get closer together.

And I don’t know if Richard [Rankin] would agree from Roger’s point of view, but definitely from my point of view as Bree, I do think that Roger having been through this almost gives a newfound empathy and a newfound appreciation on his part in terms of what Bree went through.

TVLINE | Before I let you go, gimme a tease for something that’s coming up toward the end of the season.
We may or may not see Bonnet [again]. Obviously he has resurfaced, but we may encounter him at some point… We tried to put somebody in danger who isn’t the person that we initially may think it will be. And that sets a fire under Bree, and she’s determined to save that person.