And here I was, naively thinking How to Get Away With Murder couldn’t surprise me anymore.

I’m not just talking about the identity of Asher Millstone’s killer, which we learned in Thursday’s episode — though I certainly didn’t predict the person who was wielding that fireplace poker, either. Rather, I was stunned that Murder revealed the culprit so soon; with four weeks left in the final season, I assumed that question would linger a while longer. But Pete Nowalk had other plans!

Let’s jump right in with the events of “The Reckoning,” which seemed to set up a war between Annalise and her former students.

THE EARS HAVE IT | Let’s get Asher’s murderer out of the way early: Though I was convinced that Gabriel had offed his onetime classmate — and many of you suspected him, too, along with Bonnie and Frank — he was merely an innocent witness to the crime. But you might remember that earlier this season, Murder introduced an associate of Xavier Castillo’s who 1) pretended to be an Airbnb guest in Annalise’s building, and 2) cut the brakes on Bonnie’s car, causing the accident that nearly killed her. And though this associate seemed like a background player for much of the season, we learned on Thursday that she was the one behind Asher’s death — which I suppose means Xavier was orchestrating the whole thing, like Bonnie and Frank had theorized. But more on that later.

Through a series of flashbacks, we get to see what happened after Asher offered Gabriel $64,000 for his cell phone — and to save us all some time, let’s break down what actually happened that night, despite the way this episode jumps around in time and serves up a few red herrings. First, Gabriel does hand over his device — which, notably, seems to be a second phone that he owns — but he pauses to ask Asher if Wes killed Sam Keating by himself. Asher responds that he wasn’t there when Sam died, but he thinks Wes must have had help from someone. Gabriel, meanwhile, refuses to accept Asher’s check because he thinks Asher’s high, but Asher convinces him to keep it as collateral until he gets his phone back.

When he’s back in his own apartment, Asher calls his sister (who’s partying in Atlantic City), revealing that he came clean to his friends about being the mole. He’s also worried that the FBI won’t follow through with their deal, since Asher hasn’t given them any evidence that implicates the others; Chloe tries to calm him and calls a car to pick him up. While he waits for his ride to arrive, Asher records a video message on Gabriel’s phone that we later learn is intended for Connor, Oliver and Michaela. “I’m not sorry for what I did,” Asher confesses. “I chose my family. And maybe that makes me a schmuck or soft, but I love them. And I love you guys, too.” He closes by imploring his three friends to do the right thing and look out for themselves — and just as he’s about to email them the video, Asher gets a knock at his door. 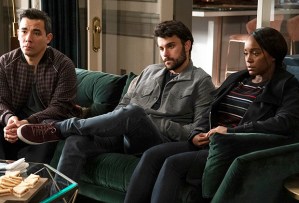 Initially, we don’t learn the identity of Asher’s mystery guest, but it’s revealed at the end of the hour to be Xavier’s associate, with whom Asher clearly has some kind of working relationship. “Where have you been? I’ve called you, like, 10 times,” Asher says. She asks Asher where he wants to go, and he replies that he’d like to go home to his mom’s house. She agrees to take him there, and she’ll wait for him to return Gabriel’s phone first — but as soon as Asher steps out into the hallway, the woman grabs hold of the fireplace poker she’d been hiding, and she kills Asher with a couple of wicked blows.

Meanwhile, when Asher’s murder goes down, Gabriel hears some commotion from the hallway, including a thud and Asher’s protests. Gabriel gets on his stomach to peek through the crack between his apartment door and the floor, and he watches as Asher’s life ends — and though he doesn’t get a good look at the killer’s face, he glimpses a woman’s dark hair as she descends the stairs and leaves the building.

Now, at first, Gabriel believes that Laurel was the one to murder Asher, especially after learning that Laurel used to live in Asher’s apartment before he did. He’s so sure of it, in fact, that he goes to the FBI to share that Laurel is the culprit. Upon hearing Gabriel’s theory, Agent Lanford calls in Special Agent Pollack, who was Asher’s point person at the FBI… and, as it turns out, Agent Pollack is Asher’s murderer. (It remains unclear whether Pollack is a legitimate FBI agent who came to work for Xavier Castillo on the side, or if she’s a full-time Castillo crony who somehow infiltrated the FBI. Either way, it seems to me that Asher took Pollack’s FBI gig at face value, and he didn’t know that she was working with the Castillos. But anything’s possible, I suppose.)

When Pollack enters Lanford’s office, she’s a little nervous to hear that Gabriel may have laid eyes on Asher’s murderer. But just when it seems like Gabriel is about to point the finger at Laurel, he realizes that Pollack is wearing some very distinctive earrings, including a cartilage piercing… and he remembers seeing those exact earrings on Asher’s killer as he watched her walk down the stairs. (I’ll choose to suspend my disbelief that Gabriel would ever have spotted someone’s jewelry from such a far distance, while peeking through a crack in the door.) Gabriel looks stunned as he mentally connects the dots — and though we don’t see the end of his conversation with the FBI, he does go to Connor, Michaela and Oliver later that day to share that he knows who killed Asher. “It was the FBI,” he reveals, leaving the three of them shocked.

PEACHY KEATING | Meanwhile, Annalise has her own problems to address. After getting arrested in Mexico, she’s on house arrest in the United States — welcome to the quarantine, Professor! — and her mother, Ophelia, is staying with her. But at her arraignment a week earlier, Annalise was merely charged with possession of a false ID and passport forgery, which seems suspect. Annalise is certain that AUSA Montes is hiding her real case against Annalise behind these flimsy charges, in order to surprise her with a slew of more substantial charges at trial. To that end, Annalise files for a bill of particulars — or, as Ophelia calls it, “that bill of peculiarities” — which would force AUSA to give Annalise a heads-up about all the additional charges she plans to bring against her. And Annalise wins this motion, because she’s Annalise.

The next day, Annalise looks through the upcoming charges against her — including the first-degree murder of Sam Keating. Annalise quickly deduces that Connor and Michaela must have taken a deal, because there’s no way Asher alone could have supplied the FBI with convincing evidence of Sam’s murder. “The little bitches turned,” Annalise says… but she insists that she, Bonnie and Frank need to play nice with Michaela, Connor and Oliver for now, and she even tells her former students that she won’t sell them out, because then she’ll look like a fool for protecting them all these years. “If we can’t trust each other, what do we have?” she says to the trio, not-so-subtly hinting that she knows they’ve already betrayed her. 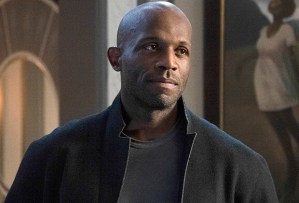 Unfortunately, there might be another traitor to add to Annalise’s list, and that’s Nate. When Tegan takes a meeting with AUSA Montes, attempting to get some of Annalise’s charges dropped before trial, Tegan scoffs at the “aggravated arson” charge, since Annalise’s house only exploded due to a gas leak a few seasons ago. That’s when AUSA reveals that the arson charge doesn’t refer to Annalise’s campus house; it’s about the fire started at her childhood home on Peachtree Street (which we already know was started by Annalise’s mother in order to kill Annalise’s sexually abusive uncle).

“They’re alleging a pattern of arson based on the fire that burnt down your childhood home,” Tegan tells Annalise, who’s more concerned about how the FBI even obtained the news clipping about the Peachtree fire. And that’s when it hits her: The night that Annalise took off for Mexico, Nate had handed over the files that D.A. Denver used to keep on all of them, which included the news article about the Peachtree fire. At the time, it seemed like Nate hadn’t given those files to the FBI… but Annalise now assumes that he made copies of the documents, which he must have given to the bureau. (We don’t see any flashback footage of Nate doing this, but we do know he’d spoken to the FBI before, while pursuing justice for his father. So Annalise could be right.)

Annalise reveals to Bonnie and Frank that Nate likely betrayed her, and Frank is ready to put Nate in a body bag right then and there. But Annalise insists that Nate can’t know they’ve figured out his secret; she even tells Bonnie and Frank to get out of Dodge and protect themselves, which is exactly what Annalise tried to do for herself in Mexico. But they both refuse the offer: “It’s always been the three of us,” Bonnie counters.

“They wanna come after me, call me an arsonist?” Annalise says. “Well, they better get ready, ‘cause we’re gonna burn every last one of those motherf—kers down.” (Bonnie seems pleased by that idea.) And this episode answers another big question about Annalise: The night that she went to Mexico, she had asked her VIP Results driver to stop the car so that she could go back and get Bonnie to come with her. But when she knocked furiously on Bonnie’s door, Bonnie didn’t answer, because she’d gone to Annalise’s apartment to let her know that Asher was the mole. At first, Annalise suspects Bonnie of killing Asher, because “you found out what he was doing, and I know what you’ve done before.” But Bonnie tearfully responds that it wasn’t her, and Annalise chooses to believe her. (And it’s a relief to know that she should!)

OK, your turn. What did you think of the episode’s big reveals? Had you suspected Xavier’s associate at all in Asher’s murder? Drop your reactions in a comment below!