Need to catch up? Read our How to Get Away With Murder fall finale post mortem here.

After four long months, How to Get Away With Murder is finally back — and man, the world has really changed since this show last aired, huh? (I ask this as I eat my body weight in chocolate chip cookies, not having left my house in days. Come back, November 2019!)

After Thursday’s spring premiere, Murder only has five episodes left in its entire run. But if you thought the show would start to get nostalgic in its latest hour, you would be mistaken: Asher’s murderer is still a mystery, Connor and Michaela are in the FBI’s pocket and Annalise’s fresh start is over before it even began. Before you weigh in on the midseason premiere, read on for the details of the episode:

WHERE IN THE WORLD IS ANNALISE KEATING? | In the episode’s opening scene, Annalise stares at herself in the mirror of a public restroom; we eventually come to learn that she’s in Mexico. Moving quickly, she takes off her wig and makeup, changes into a new dress and ditches her purse in the garbage can, then exits with only her suitcase.

Moments later, Annalise gets a text from an unlisted number, telling her to go to a nearby cafe. There, she meets up with an anonymous woman (who calls Annalise by her new name, Justine), and the two of them then walk to another destination. It’s a long trek, though: By the time we catch up with Annalise and her handler again, the sun has set, and Annalise mentions they’ve been walking for more than an hour, but she still has no idea where they’re going. Also of concern? Annalise’s handler takes a phone call in which she sounds exasperated, and when she hangs up, she says “they” might know that Annalise is in Mexico. (Whoever “they” are.)

Finally, Annalise and the woman spot a car with a driver ready to take them to their next location. But when Annalise’s handler moves into the street to meet the driver, Annalise hesitates. The woman urges Annalise to “be smart” and come with her, but Annalise decides not to, moving back into the busy crowd on the sidewalk. Her handler seems annoyed, but she doesn’t chase Annalise down; she merely gets into the car, and the driver pulls away.

It seems Annalise should have gotten into that car when she had the chance, though. Seconds after her handler disappears, Annalise is suddenly approached by the Mexico police, and she looks completely shocked as they grab and arrest her. (But more on that arrest in a minute.)

Meanwhile, in Philadelphia, Bonnie discovers that Annalise took off, and she asks Tegan if she helped Annalise disappear just like she helped Laurel. Tegan reveals that Laurel had blackmailed her into helping her get away: If she didn’t agree to help, Laurel would tell Jorge that Tegan was the Jane Doe who got him arrested in the first place.

Later, Bonnie informs Frank that Tegan facilitated Laurel’s disappearance, and Frank goes to confront Tegan… but she’s not intimidated by him. She tells Frank that she doesn’t know where Laurel went; she merely has a connection in Mexico — hmm, the same place where Annalise is now? Interesting! — who takes care of things like this. And even if she did know Laurel’s whereabouts, she sure wouldn’t blab them to Frank and risk Laurel and Christopher’s safety yet again.

ASHER’S FINAL HOUR | Throughout Thursday’s episode, the show starts to piece together the night Asher was killed via flashbacks. In fact, so many of the timeline gaps are filled that I actually thought we might learn the identity of Asher’s murderer in this episode. (We don’t.) But even though the killer remains anonymous for now, there’s one person in Annalise’s circle who has started looking mighty suspicious. (It’s Frank. Because of course it’s Frank.)

We go back to the visit that Asher paid Bonnie before his death, when he showed up covered in blood. Asher starts rambling about a lot of unsavory topics — Laurel’s disappearance, whether Annalise is the FBI’s real mole, etc. — and Bonnie suddenly seems extremely wary of Asher. She suggests that the blood loss has made him confused and offers to make him some tea… and when she walks into the kitchen, we learn that Asher was recording that conversation the whole time, which Bonnie seemed to realize. Meanwhile, Bonnie surreptitiously calls Frank and tells him that she thinks Asher is the mole; he needs to come over and drive Asher home ASAP.

When Frank arrives at Bonnie’s, though, it’s Asher who seems wary of the two of them. And even though he lets Frank drive him home, he spends the entire car ride trying to convince Frank that Annalise is the mole — and Frank, naturally, doesn’t seem to buy it. He’s so suspicious of Asher, in fact, that he insists on walking Asher to his apartment door, then lets himself in to use Asher’s bathroom once they get upstairs. (And in the bathroom, he finds even more reason to believe Asher’s the mole: In the cabinet under the sink, Frank discovers a loose floorboard that seems to have something hidden underneath it, though we’re not shown what that something is.) 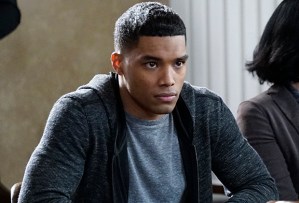 Before Frank can leave Asher’s apartment, Asher strikes up a very awkward conversation with the guy, in which he’s clearly trying to get Frank to say something incriminating about all of the awful things that Annalise’s inner circle has done. But Frank doesn’t take the bait, and after he leaves, a frustrated Asher listens back to his recordings of Bonnie and Frank, only to realize that neither of them said anything usable that he can give to the FBI. He throws his cell phone against the wall in a fit of rage… then, immediately realizing how moronic that was, he picks it up to find that it’s completely shattered and won’t turn on. (“Stupid dumb rage monster!” he mutters, which isn’t the most inaccurate nickname he’s ever given himself.)

Asher then goes across the hall to see Gabriel, who’s busy listening to his own cell phone recording of Frank from earlier that day. (You remember the one: “I wish I had killed Sam. Maybe killing his son’s the next best thing.”) (Also? One of our lingering fall finale questions was just answered: It was Asher who knocked on Gabriel’s door the night that he died.) Asher asks to use Gabriel’s phone, and Gabriel says no… until Asher offers to give him the $64,000 that he won from Annalise’s final exam. Interestingly, we don’t actually see Gabriel agree to the exchange, nor do we see him give Asher the phone. But in the present day, we do see Gabriel reading a news article about Asher’s death, and he guiltily looks at the check that’s sitting on his desk.

Elsewhere in the present day, Bonnie and Frank try to assure everyone — including Nate and Oliver — that Asher’s death was obviously Xavier Castillo’s doing, and Xavier wants them all to point the finger at one another. Nate and Oliver seem skeptical, though, and even Bonnie seems to have second thoughts about that theory. At the end of the episode, Bonnie asks Frank if he was the one to kill Asher, as all of those flashbacks have indicated he might be. “No way I’m that stupid,” Frank tells her, though it’s not as convincing as he’d probably hoped.

DEAL OR NO DEAL | Last but not least, we have Connor and Michaela, who are really going through it after getting arrested for Asher’s murder. We’ve already seen Connor experience some kind of panic attack while getting questioned… but when a medic comes in and confirms it was a panic attack, Connor insists he’s had those before, and this felt different. But Agent Lanford isn’t sympathetic to Connor’s struggles, and he refuses to transfer Connor to a hospital.

Meanwhile, as was teased earlier this season, Oliver suddenly confesses to murdering Asher, and it turns out he’s not just putting on a front to protect Connor. As he confides to Bonnie, who becomes his lawyer, he really does think he’s responsible for Asher’s death, assuming that his initial blow to Asher’s head later killed him.

Connor, Michaela and Oliver later have their bail hearing; Connor is represented by a lawyer his family hired, and Michaela is represented not by Tegan, but by Kendra Strauss, an attorney her father knows. In the end, only the charges against Oliver are dropped due to insufficient evidence, and he’s immediately released, while Connor and Michaela must remain in police custody. (And Asher’s sister, Chloe, is none too pleased that even Oliver got off the hook, seeing as she stands up at the hearing and screams that “they’re all murderers! They need to die now, too!”)

Both of them are then offered a plea deal: If they sign, agree to testify against Annalise at trial and admit that Annalise forced them to kill Sam Keating, they’ll get five years for everything, and they’ll be released that day. If not? They’ll stay in police custody until trial, where the assistant U.S. attorney will try to get them put away for life. 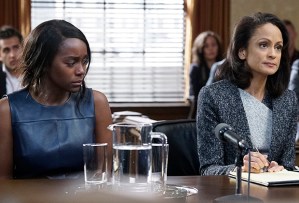 Connor and Michaela are left to weigh the options with their loved ones, and they both seem reluctant to take the deal. Neither of them wants to throw Annalise under the bus when she didn’t commit any of these crimes, and Michaela worries that she’ll never become a lawyer if she signs the immunity deal. But Oliver and Solomon passionately counter that they should take the deals: Oliver thinks Annalise should take the fall for everything she’s put them through, and Solomon reminds Michaela that a jury won’t treat her nearly as fairly during trial as they’ll probably treat Connor. Plus, Solomon is wealthy and powerful, and he’ll use every available resource to make sure his daughter does become a lawyer when this is all over.

Later, the FBI agents return to AUSA Montes (played by True Blood’s Lauren Bowles) with some signed paperwork, and she seems pleased, though we’re not initially told who took the deal. Then, at the end of the hour, it’s revealed that Connor and Michaela both signed — and they each gave the same stipulation to Agent Lanford that they would only sign if the other person got the exact same protections they were getting. It’s not totally clear what Connor and Michaela’s new sentences are, but they did talk Agent Lanford down from five years, so… yay, I think!

Connor and Michaela reunite in the hallway, looking exhausted and disheveled, but they’re delighted to realize they both fought to get each other the same protections. “Great minds,” Connor says in disbelief. “Brilliant minds,” Michaela responds.

Then, after watching his daughter happily reunite with her friend, Solomon walks over to Agent Lanford and asks if he’s located Annalise Keating yet. Lanford looks intrigued… and Annalise is arrested in Mexico not long after that conversation.

Your turn, Murder fans! Are you thrilled the show is back? What did you think of the spring premiere? Grade it in our poll below, then drop a comment with your full reviews!