Warning: The following contains spoilers galore for Thursday’s Grey’s Anatomy. If you haven’t watched yet, you might want to do so before reading.

Thursday’s Season 16 finale of Grey’s Anatomy took Richard’s loved ones — and us along with them — on an emotional roller-coaster ride. One minute, he was being diagnosed with Alzheimer’s; the next, he was having a hip re-replaced as an antidote to cobalt poisoning. In the end, he recovered both physically and mentally… which completely and totally undid his reunion with estranged wife Catherine. Here, to put the episode’s turnabouts in perspective for TVLine, is original cast member James Pickens Jr. 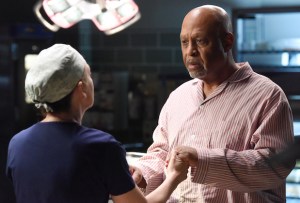 TVLINE | As this story has unfolded, have you been aware that viewers have been upset and worried about Richard?
[Laughs] That’s an understatement. I think after last week’s episode, I got more texts than I have in the entire 16 seasons I’ve been doing the show. It looked like my phone was blowing up, just with friends saying, “Oh my God, what’s going on?” But I was very appreciative.

TVLINE | Was there any point when you were worried — like, “Wait, are they killing me off?”
[Laughs] You know, there are no guarantees in this business. But early on, when [showrunner] Krista [Vernoff] pitched this story, one of the first things she said was, “Don’t worry — you’re gonna pull through. We just want to let you know what this is gonna look like.” So I could exhale a little bit. 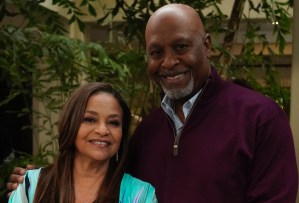 TVLINE | Let’s talk about the end of the finale. I love Richard with Catherine, so I was bummed that the first thing he did when he got out of surgery was push her away.
Yeah, it seemed like the wounds had started to heal, but they’re both such strong-willed people and so passionate in what they think — obviously, that translates to their love for one another. But he really felt betrayed by her. First she fires him, then she turns around and buys this hospital that he was turning around with Karev. Now she’s regretting her actions, but he’s wondering, “Is it just because I’m sick?” So I don’t think he’s giving her a pass. He’s still pretty pissed. It’s gonna take a minute to get over all that.

TVLINE | Could you see Richard, in his anger, turning to Gemma?
Ah, that was such a great arc. Jasmine [Guy] is a dear, dear friend of mine. I must have known her for close to 40 years, I would imagine. But if Richard is nothing else, I think he is a man of integrity. He’s had his moments — he has strayed, back in the Ellis days. But I think with Catherine, it’s different. He really does love her. Gemma made him feel like he was still desirable, but I don’t think he wanted to act on that. So I don’t think that’ll manifest into anything else.

TVLINE | Since Richard’s hip re-replacement cured him of his hand tremors, do you see surgery as a part of his future again?
I wouldn’t be surprised if he went back to it. He’s a man who likes control, and when you don’t have it, that’s a scary place to be. Now that the shakes are gone, he’s reenergized. So he could go back to surgery. But I think his real forte is teaching. That’s where his experience has helped to shape the interns and attendings on the show, and I’d like to see them explore what that looks like now.

TVLINE | Did you have any idea what the original finale was going to entail?
I really didn’t. But with this extended period of time we now have — this hiatus, for lack of a better term — I’m sure the writers are going to hunker down and come up with some very interesting stuff. I wouldn’t be surprised by anything they have in mind when we go forward. They have a lot of options to play with!

For the scoop about where you can find out about the intended season finale, straight from showrunner Krista Vernoff, click here.