For an episode that was never supposed to be the season finale, Thursday’s Grey’s Anatomy sure did the trick. (For intel on what the intended season finale would’ve entailed, straight from showrunner Krista Vernoff, click here.) In addition to revealing the reason for Richard’s deterioration, the episode ushered into the world Amelia and Link’s son, inched Meredith and Cormac closer to a first date and gave Owen an earful that prompted him to bail on his and Teddy’s wedding. What, exactly, did he hear? Read on, and I’ll try to do justice to the telltale voicemail. 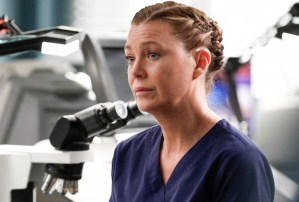 ‘IT’S A CAREER-DEFINING MOMENT’ | As “Put On a Happy Face” began, Meredith, DeLuca and their peers were working round-the-clock to diagnose Richard. Well, some of them were, anyway. Koracick, Amelia and Maggie were so convinced that he had Alzheimer’s that Catherine was going to take the patient home. Luckily, before she could, they discovered that he’d lost feeling in his feet. And his hands. WTF? Turned out, he had severe acute onset motor and sensory nerve degeneration, which Mer was quick to point out was inconsistent with an Alzheimer’s diagnosis. She was right all along! Next, it was DeLuca’s turn to shine. No sooner had Richard been wheeled into the O.R. for a biopsy than Andrew raced in, knocked all of Bailey’s sterile equipment off their trays and announced that Webber had had a hip replacement. If that new hip was made of cobalt, it could be deteriorating and, thus, causing all of his symptoms. And it was — DeLuca was right!

Elsewhere, Tom was taken aback to learn that Owen and Teddy were getting hitched that very night. In Koracick’s estimation, she was racing down the aisle with her babydaddy in hopes of convincing herself that she could live without her actual Mr. Right. “I’ve seen a few shotgun weddings,” he cracked, “but usually, it’s not the bride holding the gun.” Later, he paged Teddy to his office and implored her not to throw her life away. That night, he’d wait for her in his car in Lot B to take her anywhere she wanted to go. Between kisses, she admitted, “I love you, too,” and as the lovers got busy on the couch, the bride-to-be dropped her cell phone in such a way that it apparently dialed Owen’s number. So when he later had Levi play the message aloud while they were in surgery, all that was missing was a bow-chicka-bow-bow soundtrack. “Teddy’s idea of a wedding gift,” he said, trying to make light of the message before anyone heard who was making his fiancée moan. 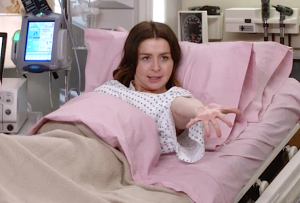 ‘YOU STOLE THE FATHER OF MY BABY WHILE I’M IN ACTIVE LABOR!’ | Meanwhile, Jackson, Jo and Cormac prepared to perform surgery on a teenager named Daya to implant in her face some of her leg muscles so that she could for the first time do what the title of the episode says. Since the girl was eager for her widowed dad to swipe right and get back out there already, talk in the O.R. turned to dating. What was Jackson’s dating-app pic? Jo asked. “A shirtless selfie of you on your yacht or your jet?” Ha. When Cormac admitted that he didn’t have a profile pic, or even a profile, Jo remarked that of course, he didn’t — he had his own personal matchmaker. What did that mean? he wanted to know. More and more, he got the impression that people were discussing his personal life in ways that he wasn’t privy to. At Grey Sloan? Ya think? The surgery was a success, BTW. And Dad never swiped right, we learned, because he was already dating his daughter’s algebra teacher.

In other developments, Amelia’s busy day of surgeries was cut short when her water broke. She and Link were good to go, though, their usual adorable selves. Just one teensy problem: Bailey needed Link to remove Richard’s poisonous hip, stat. He could go, Amelia said — but Bailey had to stay and hold her hand. As the mom-to-be marveled that anyone would ever go through labor pains, she realized… oh, she was making Bailey sit through a birth after she just lost her daughter. It was OK, Bailey assured her. She wasn’t going anywhere; that was against the rules of Pregnancy Club. (Aww.) While they and Carina welcomed the newborn, Link removed tons of sludge from Richard’s hip. “If this is happening to other people,” he told DeLuca, “it’s gonna be a game-changer.” It already was for Richard — the surgery was a success.

‘HE’S BEAUTIFUL’ | As the hour and the season came to an end, Link was introduced to his son. “He’s so small,” he marveled. “Don’t say that to the person who just pushed him out,” Amelia replied. Those two are gonna be a fun mom-and-pop operation! Once he was out of surgery, Owen listened to Teddy’s accidental message in full and heard her insisting that she wasn’t going to run away with Tom. “This was goodbye,” she told him. Which was hardly consolation to Hunt, who phoned his mom to say he’d been called in to last-minute surgery and have all the wedding guests sent home. Unaware that she’d been busted, Teddy was shocked. Back at Grey Sloan, when Richard awakened, he knew his name, where he was… “If this is a quiz, you might want to ask some tougher questions,” he told Jackson and Maggie. He appeared to be right as rain.

That is, he was right as rain until Catherine entered. Sure, she’d had a change of heart during his medical crisis, but that had in no way diminished his anger toward her. He still wanted nothing to do with his Cleopatra. As Mer left the hospital, Cormac asked her for a drink, but she was too exhausted. “Will you ask me another time?” You bet he would. She then found DeLuca sorta sitting on the floor freaked out and unsure of what was wrong. So she sweetly helped him up and out. If he needed an advocate — and clearly, he did — he couldn’t have asked for a better one. So, what did you think of “Put On a Happy Face”? Grade the finale in the poll below, then hit the comments with your hopes and fears for Season 17.