The schtick o’ the week in Wednesday’s Masked Singer was security — as in, going through metal detectors when getting on planes, having your purse rifled through before entering buildings, etc. The idea was introduced during a cold open that saw the judges getting their bags searched before entering the studio. I know we were supposed to focus on the joke — that everyone but Ken Jeong sailed right in — but all I could think about was: Why did the judges’ paraphernalia stay on the table after they left?

Didn’t Robin Thicke want his hairspray and zillion mirrors? Wouldn’t Nicole Scherzinger miss one of her 40 cell phones? What about Jenny McCarthy Wahlberg’s magazines? Were these items somehow contraband? Dangerous? And why didn’t they make one move to try to put them back in their bags?

It’s also possible I have a little too much time to think these days.

Anyway, read on for a recap of the performances:

NIGHT ANGEL | The purple cherub’s rendition of Shania Twain’s “Man! I Feel Like a Woman” didn’t really solidify until she was standing in one place — I get it, walking in those costumes is perilous, and I probably wouldn’t focus as much on the melody then, either — but then it soared. Almost all of this week’s clues (for each contestant) were visual, so I’ll just list them: Snow globe, crown, bee, “Boss,” “The Boy is Mine” and an ostrich. (My guess: Real Housewives of Atlanta‘s Kandi Burruss) 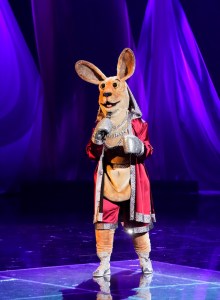 KANGAROO | Pouchy McBouncerton seemed a little behind tempo at the start of Jordin Spark’s “No Air,” but the simple staging — no back-up dancers, minimal choreography — really worked to her advantage. Clues: a ship in a bottle, Big Ben, a turntable, red lipstick. Oh, and when she addressed the judges, she admitted that “this show is the first time I’ve ever sung in front of anyone.” (My guess: Life of Kylie‘s Jordyn Woods)

ASTRONAUT | This was the first week the space traveler seemed shaky to me, as the opening of Shawn Mendes’ “If I Can’t Have You” wasn’t quite up to his normal quality. He recovered well, though, by jumping to his falsetto and adding some nice flourishes. Clues: the White House, an accordion, an airplane and a lightbulb. (My guess: Singer/songwriter Hunter Hayes) 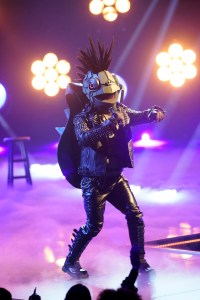 TURTLE | By far the best performance of the evening, the Shelled One’s cover of James Bay’s “Let It Go” started strong and ended even stronger. (That chorus? Yummy.) Clues: “Never Keep Open This Bag,” a gavel, a baseball glove, cologne, an arrow pointing left and what looked like maybe a British journal? (My guess: Summerland star/pop singer Jesse McCartney)

THE UNMASKING | Kangaroo was chosen to go home. When she was unmasked, she was revealed to be Woods. (Go here to see what she has to say about her time on the show.)