If there was a stealth competitor in this season of The Masked Singer, it was Kangaroo.

It wasn’t so much that viewers didn’t start guessing former Kardashian entourage member Jordyn Woods‘ name immediately after she performed in the season premiere, because they totally did. But the element of doubt was sizable… mainly because no one outside the reality-show personality’s family had ever heard her sing a note. 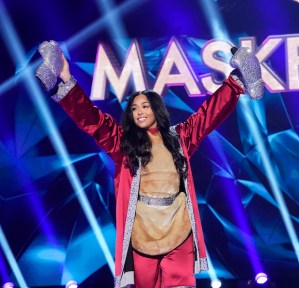 That didn’t stop her from dreaming of being, if not the last singer standing, at least Golden Mask-adjacent by the finale.

“I’m competitive by nature, so I would love to stay,” the former Life of Kylie star told TVLine Wednesday. “But the fact that I even made it this far with what seems to be only professional singers left… I was just proud.”

Read on for Woods’ thoughts on making Season 3’s Top Eight and what that highly misleading clue about her “little ‘roo” meant. (And read a recap of the episode here.)

TVLINE | When you first started on the show, a lot of readers were commenting that they thought it might be you… but they had no idea you could sing. Have you had any training? What was your experience like prior to this?
One of my clue packages, it was my brother [speaking to the camera], and he was saying how he always used to tell me to shut up and now he’s happy I’m actually going with it. I’m always singing at my house, around my family, but I’ve never sung publicly… No one really knows. It’s something that’s kind of, unless you’re family, I’m not really singing [in front of you]. But it’s something that I’ve always loved. Last year, I had some free time and I started getting back into it. When I have down time or I’m going through something, I turn to writing and the piano. So I decided to work with a vocal coach who’s actually a vocal coach on The Masked Singer. That’s how I got introduced to the show. He was like, “You should do this.” I was like, “Really? You think I could do this?” He was like, “I know you could do this.” So I just went for it.

I will say, it wasn’t as glamorous as people think. I’ve was in my downstairs room with a jacket over my head, trying to prepare myself to see what it would feel like with a mask over my head. I had my snowboarding goggles on.

TVLINE | How did it compare?
Honestly, there’s no comparison. There is nothing like being on The Masked Singer. [Laughs]

TVLINE | One of the clues that threw me was when you said you were “doing it all for my little ‘roo.” You don’t have any children, as far as I know, right?
No. [Laughs] There has never been a child that you guys don’t know about. But I do have a little sister who looks up to me and copies everything I do. So I have to be very aware of the things that I do, the things that I say, because she is a mirror. So that’s the little ‘roo.

TVLINE | That’s a tricky, tricky clue, ma’am.
I needed something to throw everyone off! I didn’t think anyone would know at all, and the second the first episode comes out, everyone’s tweeting me like, “Oh, that’s for sure Jordyn.” I was like, oh wow, you guys were crazy.

TVLINE | It was not me — I thought you were Tatyana Ali for like three weeks. So you fooled some of us.
Yay. [Laughs]

TVLINE | You’re very active on social media. Was it a challenge to keep this off of your Instagram account?
I have a lot of balance when it comes to social media but I definitely was taking a lot of pictures, so they’re going to hit social media very soon. There’s videos. I think it was more difficult to keep it away from my friends and family rather than social media.

TVLINE | Obviously, your brother knew. Who else in your family knew?
I have two brothers, and my sister Jodie and my mom. Other than that, no one knew — no aunts or uncles, no grandparents. Actually, though, how am I going to let my grandparents know to watch the show without letting them know I’m going to be on it? [Laughs] Like, “Grandma, watch these big, singing animals.”

TVLINE | You’re hunkered down at home, like the rest of us. What have you been doing to keep busy?
There’s a lot of stuff I needed to catch up on: organizing and house stuff. So I’ve been organizing my house, trying to work out at home… I’ve been writing, doing music and just trying to create more business plans and keeping my entrepreneurship going.

TVLINE | Will you add music into that mix now? Are you thinking about putting out an album?
Honestly, I don’t think I have a choice now. I think it’s what the people want.