The following post contains spoilers for The Resident‘s Season 3 finale. Proceed with caution!

The Resident scrubbed out a little earlier than expected on Tuesday, ending its third season three episodes ahead of schedule after coronavirus concerns shut down production.

Of course, the Fox drama’s makeshift finale was eerily timed, given that Chastain Park Memorial was dealing with its own outbreak in Episode 20, just as a real-life pandemic prompted the show’s premature end. The good news? Chastain’s docs were able to contain the spread of the Candida auris superbug before it infected the whole hospital. The bad news? It came at a cost.

Not long into Tuesday’s finale, Kit Voss learned that her son-in-law, Derek, had contracted the fungus after he’d been intubated with a contaminated ventilator. Derek began to decline rapidly — fever, delirium, loss of vision, the works — and he wasn’t responding to a combination of meds that Conrad thought might do the trick.

Later, Conrad discovered that Derek had an abscess on his spine, which was keeping him infected with the superbug and preventing the antibiotics from working. Dr. Cain was the only neurosurgeon capable of performing such a delicate surgery to eliminate the abscess — and though Cain agreed to do it, he was also preoccupied with a patient named Justine, with whom Cain had a serious relationship in college. (“Few people have mattered more,” Cain told Nic of his ex-girlfriend.) Justine initially visited the ER with some jaw pain, but ultimately needed a crucial surgery that Cain was slated to perform on the same day as Derek’s operation.

In the end, Derek’s surgery went smoothly: The abscess was removed and he stabilized, though it remains to be seen if he’ll get his vision back. Unfortunately, Justine’s health took a turn while Cain was working on Derek — and by the time Cain got to her operating room, the situation was dire, and she died in surgery despite Cain’s frantic attempts to save her. (And Cain’s day didn’t exactly improve from there. Though he doesn’t know it yet, Red Rock’s Logan Kim — who is furious with Cain for bringing a superbug into the hospital — went to Conrad at the end of the hour, offering to boot Cain from the hospital’s board and give Conrad the same power and influence at Chastain that Cain once had. Conrad’s answer, naturally, is TBD.) 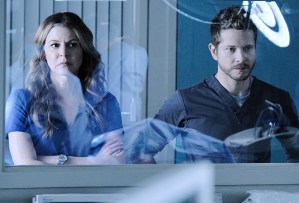 After screening the ersatz season finale, TVLine spoke with executive producer Todd Harthan, who broke down those new developments, shed some light on the episode’s coronavirus reference and teased how the show would pick up in a not-yet-greenlit fourth season.

TVLINE | What have the last few weeks been like on your end, particularly when it became clear this season would get cut short? Was there ever any discussion of going back into production somehow, or perhaps tweaking this episode in post-production to be more like the finale you’d envisioned?
All of the above. The conversations were constant. What was interesting was, you could have a conversation at lunchtime on a Tuesday, and then because of all the news that was coming in, your conversation post-lunch changed, and the strategy you had about filming and trying to finish your current episode [changed]. Two hours later, you were going, “Wait a second. It’s the cast and crew and everybody, and everything else is shutting down, and what do we do?” It was a fast-moving, very intense, unfamiliar situation for all of us. We figured it out as we went.

We had the luxury — in this particular season, anyway — where the last three or four episodes are so intense because it’s the culmination of our [Red Rock storyline], and so many personal relationships have been building up over the course of the season. So this year in particular, our last five episodes were all feeling like satisfying, big episodes. When this all hit, we did make some adjustments when Episode 20 became our finale, and we did have the luxury of other pieces of shot footage, and we said, “Oh, wait, what if we take this puzzle piece and move it into Episode 20, to give it more of a cliffhanger-like feeling?” It was crazy. It was intense. And ultimately, it’s a TV show. For us, it was about doing the best we can, but let’s be realistic that the things happening in the rest of the world are far more serious.

TVLINE | We’ve seen a lot of shows getting creative with how they produce new content online. Have you guys discussed doing anything remotely, like a table read for an unaired episode?
We haven’t yet, because I think we’re going to start with a virtual writers’ room once we get a Season 4 pickup. We’ll just get some material written, so that when we can go back into production — hopefully sooner rather than later — we have great scripts ready to go. We haven’t started thinking about those outside-the-box ideas yet, but it’s early days. I’ll get off the phone with you, and then someone will call and say, “Hey, we’re doing a Zoom episode!” [Laughs] As of today, we haven’t had any of those conversations yet.

TVLINE | As for the episodes that didn’t air this season, how might you guys work those unresolved stories into a fourth season? Will they essentially just get tacked onto the front of Season 4?
Actually, no. We had all these building blocks — scripts that were written, and some extra shot footage. And now we have this period of time where we can look at those pieces and say, “How best do we want to use the things we’re still excited about? In the world of the premiere, is this how we want to start the season? Do we want to revisit this idea, or come up with something better?” We’re not just saying we’ll take the next three [episodes] and start the next season [with them]. We’re not doing that. There are some big pieces that will remain intact, but some other things are being reimagined.

TVLINE | The timing of this superbug storyline ended up working out quite strangely, and the show aired some disclaimers that it had been conceived months ago. How far back did you start breaking that? Was the coronavirus on anyone’s radar at that time?
No. When we were airing Episode 10, our midseason finale, we were writing Episode 16, breaking Episode 17 and starting to come up with the seeds of Episode 18. We were way ahead. The word “superbug” came out of [co-creator] Amy Holden Jones’ mouth… probably in November or December of last year. It’s just one of those things! But the superbug was almost a story in Season 2. People who work as medical professionals — this is in their lexicon quite a bit. It was a story we were always going to do. The timing of it was just crazy and bizarre. But no, it was months before this particular virus was on the radar.

TVLINE | And yet, Devon has a line in this episode when he says, “It’s Candida auris, not coronavirus.” Was that a coincidence, too, or had you added that intentionally?
That’s not a complete coincidence. By the time we were doing the final edit on that particular episode, [the coronavirus] was becoming very much a global issue. There were a lot of conversations about how we would respectfully differentiate the two. The way we were handling the superbug is very different from the way that you would handle a virus like COVID-19. We wanted to make sure the audience didn’t get those two confused, because it would have made us, as storytellers, look irresponsible. We needed to make sure we separated the two. 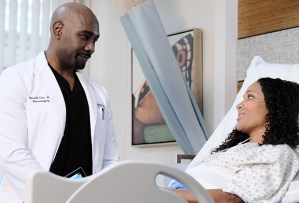 TVLINE | I was surprised to see that this episode humanized Dr. Cain a bit, after he’s been such a villain all season. Why did you want to soften him a bit here?
It speaks to where we were going with him in the last three episodes after this new finale. There was a lot that was going to happen in the world of Cain, and this particular experience — with the death of his past girlfriend — played into that. It’s interesting to see characters that are deeply, deeply flawed and to show how big life events can either change them or further darken their character. We were interested in playing that tug-of-war that’s happening within Cain — how these big things are happening in his life, be it how he handles the superbug or the tragedy that happens in the finale. Will those be the things that send him on a path of redemption, or will it send him the other way? There’s a lot of story in that, and we’re talking about exploring that in the early episodes of Season 4.

TVLINE | Looking ahead to a potential Season 4, might Cain hold any resentment toward Kit, since he wasn’t able to be at Justine’s side while operating on Derek?
That’s an interesting question, because our conversations in the writers’ room have always been about Kit’s attitude toward Cain, because of his agency in what happened to Derek and her family. We’ve never really had the conversation about seeing it through Cain’s eyes. But obviously, they have a verrrry complicated relationship. [Laughs] And we do have some plans to dig deeper into that relationship in Season 4. But it’s an interesting question, because I’ve never really thought of it that way. I’ve always thought, “Wow, she has a lot to be angry at him for.” Does he have anything to be angry at her for? It’s an interesting thing that could come up. And I’ll have to give you credit for that. [Laughs]

TVLINE | I appreciate that! Let’s also talk about that conversation between Logan Kim and Conrad at the end of the episode. Should we take anything that Logan says in that scene at face value? Can he be trusted?
I think anything that dude does should concern people. [Laughs] I don’t think anyone should let their guard down around that particular guy. As we’ve started talking about what it looks like if Conrad takes him up on that offer, Conrad will go in with his own agenda. But will he let his guard down at the wrong time? And what is Kim actually planning? That’s one of the fun things we’re starting to talk about for the early episodes of Season 4. But no — with people like Cain and Kim, it’s never black and white, and that’s what makes them dangerous.

TVLINE | And everything that Logan is offering — power, influence, being the face of Chastain — doesn’t really seem like Conrad’s thing. Might he be enticed by having power anyway?
The only way he would be enticed is if he sees that power and influence as a conduit into changing the system and making his hospital better and safer for patients. If he thinks he can use it for good, he’ll exploit it. But the idea of walking out and seeing his face hanging on the side of a building would probably make him nauseous. But he would fight that nausea if it were to advance his own agenda, and that’s going to be the psychology that we delve into if he takes Kim up on it.

The Resident fans, what did you think of Tuesday’s de facto finale? Grade it in our poll below, then drop a comment with your full reviews!