The extra-long wait for Blindspot‘s final season is nearly over. NBC announced Friday that the drama’s abbreviated swan song will premiere on Thursday, April 30 at 10/9c.

The show will then settle into its regular 9 pm time slot on Thursday, May 7. Season 5 will consist of just 11 episodes.

The April launch date is actually earlier than expected, as NBC had previously confirmed that Blindspot would be held for the summer. But in the wake of the coronavirus pandemic, networks have made quite a few scheduling tweaks to accommodate changes in production. (Click here for an up-to-date list of new season finale dates.)

Upon its return, Blindspot has a major cliffhanger to resolve: During last season’s finale, Jane, Weller and the rest of the FBI team were framed for a scheme called Project Helios, which had really been orchestrated by the season’s Big Bad, Madeline Burke. Shortly after the team found a remote cabin where they could hide from the authorities, Madeline ordered a drone strike on the location — and a missile hit the cabin while Reade, Zapata, Weller and Patterson were still inside.

Jane — who has apparently gone blonde in the new episodic image above! — narrowly escaped the explosion, but series creator Martin Gero hinted that “it would be safe to assume that not everyone makes it out of that safe house alive.”

“Should members of the team survive, they’re bonded together now, closer than they’ve ever been,” Gero added. “For the ones that can make it out, there’s going to be a great unity and a great common purpose of, ‘We’ve got to fix this together. We have to trust each other.’ It’ll be some of the purest team stuff that the show’s ever done.”

Blindspot fans, what are your hopes for these final episodes? Scroll down to see a new poster for Season 5, then hit the comments section below. 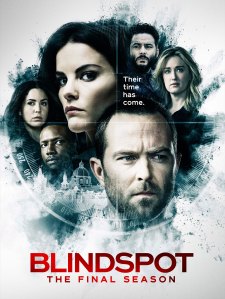