In Season 5’s 20th installment, store manager Amy Sosa received a phone call about a life-changing job opportunity: Cloud 9 is looking for a new Director of Customer Experience who would oversee all of their locations.

There’s just one catch: The job is based at Zephra headquarters in Palo Alto, Calif., which would force Amy to pack up and leave St. Louis — as well as Jonah. She’ll still have to undergo a formal interview, but Maya (previously played by Justina Machado) put in a good word for her with corporate.

The scene ended before Amy had a chance to process the call. However, the synopsis for the NBC comedy’s makeshift finale — titled “California Part 1” and airing on Thursday, April 23 — reveals that “Dina attempts to help Amy keep a big secret from Jonah.”

As previously reported, Superstore was forced to shut down production on Season 5 sooner than anticipated due to Hollywood’s coronavirus-related work stoppage. As a result, NBC’s No. 1 comedy was unable to shoot Episode 22, which was supposed to serve as Ferrera’s swan song. She is now expected to return and complete Amy’s story during Season 6. 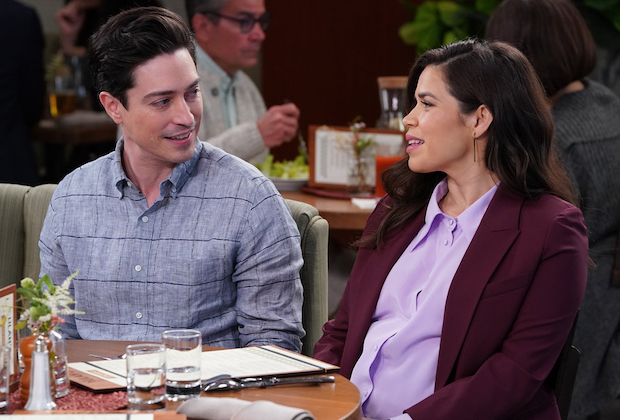 “[America] has every intention to come back,” Ben Feldman tells TVLine. “She wants to see a proper send-off for Amy, so my guess is that’ll be worked into next season. Of course, she’s pregnant, so we’ll have to figure it out. Then it just becomes a scheduling thing.”

Asked to tease the show’s ersatz finale, Feldman offered this: “There are two Amy/Jonah scenes that we shot towards the end of the [final week in production]. Once we shot [them], everybody breathed a sign of relief and was like, ‘There’s something here. We’ve got something here.’

“[The episode] was designed to feed into what happens in the final episode [that we didn’t shoot], but in and of itself, there is some sort of finality,” he says. “I feel like people will be surprised by how much they get from Amy and Jonah considering that this isn’t the [actual] finale.”

Your thoughts on the setup for Ferrera’s series exit? Drop ’em in a comment below.