Thursday’s Grey’s Anatomy was a rough one. On one hand, we had Richard, his faculties fading before our — and his loved ones’ — eyes. On the other, we had Tom, asked to save the life of his ex-wife’s son — a dead ringer for the boy they lost. At least, to lighten things up, the show gave us a patient who emerged from anesthesia with a song on her lips as well as in her heart, and Amelia having contractions that were so intense, she hilariously described them as being like “when guys get kicked in the guys,” only worse. Read on, and we’ll go over my notes, musical and otherwise, from “Sing It Again.” 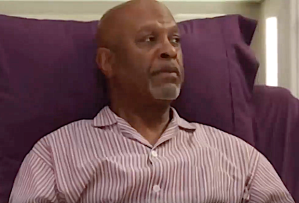 ‘LET’S ROUND UP THE TROOPS’ | As the hour began, Bailey assembled a war room of Grey Sloan’s best and brightest to try to diagnose Richard. “Prepare yourselves,” warned Maggie. “He’s not himself.” And he became progressively less like himself, or at least less like the Webber of 2020. He still believed that Catherine had been with him in L.A. and that he and his Cleopatra had reunited. He even thought that his speech had been a hit, not inspiration for mean-spirited Internet memes. When Bailey later caught DeLuca visiting Richard, she kicked out the suspended resident — but, um, did want to see the list of symptoms for which Dr. Riley had suggested he keep an eye. For her part, Catherine was unimpressed by the progress that her estranged husband’s proteges had made. “You look like a bunch of feckless interns,” she hissed. “You need to work harder.”

Afterwards, during a moment alone with Jackson, Catherine turned up the volume on her attack. “You’re letting him down,” she told her son. “Do you know that?” But, of course, really she was just deflecting, because she felt so guilty about the fact that she’d let her pride stand in the way of their reconciliation. If she’d been around, she would’ve noticed Richard slipping away. Speaking of which, he literally did that from his hospital room and wound up in the O.R. about to take a scalpel to his own belly. Though Meredith was able to talk him down, the poor guy still had lower to sink. “Ellis,” he told her, “something’s wrong with me.” Told ya it was a brutal episode! When it ended, Richard thought that he was at Seattle Grace and worried that Adele would be pissed if he was late again for dinner. When a desperate Meredith subsequently found DeLuca in the medical library, rather than send him home for the rest that everyone kept telling him he needed, she enlisted his help on Richard’s case. 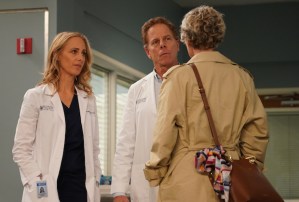 ‘I HOPE YOU AND STRAWBERRY SHORTCAKE LIVE HAPPILY EVER AFTER’ | Elsewhere in the hospital, Koracick’s remarried ex, Dana, showed up with her new son, Guthrie — who not only looked but sounded like poor, ill-fated David. The boy had a brain tumor that had spread to his spine, and his mom wanted Tom to remove it. Sensing just how utterly this surprise visit, not to mention Guthrie’s resemblance to David, had rocked Tom’s world, Teddy paged Amelia. Understanding completely, she was happy to scrub in… but began having contractions during surgery! Get Tom now, Amelia yelled at Taryn. Even though he couldn’t be near Guthrie without feeling like he was drowning, Tom attempted to perform the operation… then, when the kid began crashing, froze.

Watching from the gallery, Teddy leapt into action, speaking to Tom over the intercom and miraculously bringing his focus back to the task at hand. After he stabilized Guthrie and sent him down the road to recovery, Koracick thanked the woman he loved, who in turn apologized for having caused him pain; he’d had more than enough for one lifetime. “You’ve taken away more than you’ve caused,” he reassured her. Off that tender moment, Teddy ran into Owen, who pulled her into a supply closet for a quickie. “Let’s screw the plan,” she told her fiancé. “I wanna get married to you as soon as possible. Let’s do it this weekend.” And, considering that they kept right on tearing off one another’s clothes, I think it’s safe to assume they were in agreement about fast-tracking the nuptials.

‘THESE DOCTORS BROKE MY WIFE’ | On the lighter side, after Owen and Link treated a woman with a broken foot, she woke up singing every word she said. “So she’s just like this now?” asked her husband as if wondering whether he’d kept the receipt and could maybe exchange her. But he changed his tune after a moment in which it appeared that he might lose her. After that, he was even willing to sing with her. In other developments, Levi quickly went from being so braggy about his new housing situation that Taryn snarked, “You’re crashing with an attending, we get it!” to being ready to move out because Jo snapped at him in the pit. She didn’t want him to do that, though; she simply wasn’t going to change the way she worked just because they were roomies. Finally, when Link joined Amelia, her contractions growing ever stronger, they shared a cute moment of panic over the fact that once the baby came out, it would never again be as safe as it was right that second. And the second after… and the one after that. Because it turned out that Amelia was in false labor. It was a… case of Braxton Hicks contractions. “Suddenly,” Amelia deadpanned, “they hurt less.” Amelia and Link FTW, always.

So, what did you think of “Sing It Again”? Any guesses as to what’s wrong with Richard? Was Mer irresponsible to put DeLuca to work? And did Koracick’s ex really think he could treat their son’s doppelganger? Hit the comments.