Warning: The following contains spoilers for Thursday’s Grey’s Anatomy. If you’d like to watch first, reader later, scrub out now.

And you thought medical conventions were boring! When Thursday’s Grey’s Anatomy sent a handful of its finest to L.A. to support Richard as he presented his PATH pen at a surgical-innovation conference, Maggie fell into bed (and quite possibly love) with a sexy former resident, Teddy attempted to make amends for being the other woman in a long-ago lesbian love triangle, and Richard… Oh, Richard. In the span of an hour, he took us from thinking he was getting back together with Catherine to totally falling apart. Read on, and we’ll review all of the big twists of “Love of My Life.” 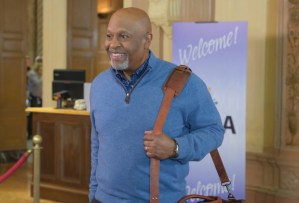 ‘COME HERE AND KISS ME, CLEOPATRA’ | As the episode began, an excited but exhausted Richard arrived at the hotel and heard from Maggie (probably more for our benefit than his) how sorry Meredith was that she couldn’t be there for his speech; her babysitter had gotten sick (isn’t that what residents are for?). Next to arrive was Cormac, who immediately flashed back to a previous entrance, upon which he’d first seen his beautiful wife. (Of note: Cormac bald > Cormac with hair.) After Richard retired to his room to work on his speech, Catherine shocked him — and, frankly, us — by showing up on his doorstep. “I’m here to stop the foolishness,” she said before launching into an apology. For his part, he offered that there was nothing between him and Gemma, though, uh, she had kissed him. “We can fix this,” Catherine said. And it looked like she was right. They even, as Jackson had predicted, laughed about her buying Pac-North, a terrible investment, she noted. The board thought her doing so was a sign of early dementia! Once they agreed that they’d had the most expensive fight since Antony and Cleopatra, they reunited horizontally. 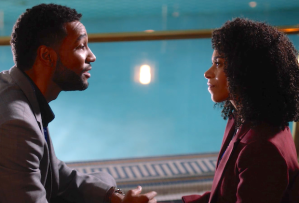 ‘FOR THE FIRST TIME THAT I CAN REMEMBER, NO ONE IN A 50-MILE RADIUS DEPENDS ON MY BREASTS FOR SURVIVAL’ | At heart-valve happy hour with Teddy, Maggie imagined that the conference was like summer camp… or the Olympic village. You mean professional by day, crazy hookups by night? Teddy asked. Innocent Maggie didn’t realize that was what the Olympic village was like. But she warmed to the concept when she glimpsed one of her former residents from Tufts, a total smokeshow named Winston. Three times he’d attended that conference, and he’d never seen her there. “What are you, stalking me?” she joked. “Not stalking,” he replied, “seeking.” Turned out, he’d had a crush on her since his first day at Tufts, but she’d been his chief, so he couldn’t ask her out. (Ha — as if that would stop anyone at Grey Sloan!) Then she’d moved to Seattle right before he became an attending, so he never got a chance to ask her out. Now, obviously, he wasn’t going to let it pass him by. Next thing we knew, they were making love in his hotel room. (Jackson who?) Afterwards, they did a quick getting-to-know-you round, bonded over losing their moms, and admitted that they’d never fallen so hard for anyone in one night. 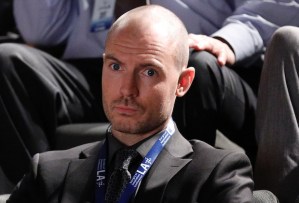 ‘DON’T BE STRONG, BE A MESS’ | Over drinks with Teddy, Cormac shared that he hated conferences and had only come because Bailey had asked him to represent peds. Didn’t seem like a good idea for the new guy to say no. While his companion talked to a sales rep, he drifted off, reminiscing about his first interactions with his then-future wife Abigail, a starving mixed-media artist making a quick $500 at a past conference by giving out pens… that she didn’t realize were from a company that made erectile-dysfunction medication. Charmed, he took all of her pens off her hands. From there, we fast-forwarded to Abigail getting a hysterectomy at 33. When she worried about bleeding out and dying, he reassured that, if she did, he and the boys would move on. “Don’t get me wrong,” he added, “it’ll be a tough coupla days.” From there, we flashed-forward a few more years and found Mrs. Hayes dying of cancer and giving Cormac instructions on how to handle it with their sons. “Let them know it’s OK to fall apart,” she told him as he did just that. As she went on with her dire to-do list, she made a point of saying that he could and should fall in love again. He didn’t want to — which, she noted, was exactly why he needed to hear her say it. Back in the present, Cormac railed against the sales rep, whose “magic” device had made him a widower. “You’re lucky,” Hayes concluded, “I haven’t put that pen through your throat.” 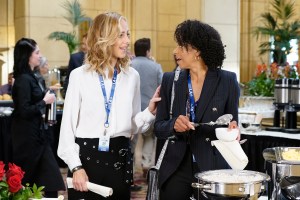 ‘THE LAST THING I EXPECTED WAS FOR THE TWO OF YOU TO GET TOGETHER’ | Left alone at the bar, Teddy ran into Claire, a doctor she’d worked with in New York who had left after 9/11 claimed the life of her significant other, the woman after whom Allison is named. (Hey, that’s Sherri Saum!) After a brief catch-up, we flashed back to the three of them cohabiting in New York. When Claire was called away to the hospital, we discovered that Allison was also involved with Teddy. In the present, Claire was surprised to learn that Teddy had named her daughter after… “My best friend,” Teddy said. But it was OK, Claire insisted. Twenty years later, Teddy could admit that she’d had a love affair with Allison. In the past, Teddy and Allison, as you’d hope, felt guilty about sneaking around and lying to Claire. “I love her,” Allison said. “But I love you more.” A lot more, it seemed. “It tore me up,” Teddy told Claire in the present. Uh-huh, but not enough to stop. In fact, as the Twin Towers fell around Allison, she’d tried to call Teddy, not Claire. Phone records… that was how she had found out. Ow to the nth. (For more on this twist, click here to read Kim Raver’s take on the revelation.)

‘IS IT GONNA BE WEIRD IF I MEET THIS MAN ON WHAT AMOUNTS TO OUR FIRST DATE?’ | As the hour rounded the corner and headed toward the finish line, a random remark from Catherine prompted Richard to have an idea for a medical breakthrough, Maggie marveled that she didn’t know it was possible to like someone so much when she knew so little about him, and Teddy approached Claire to apologize. Teddy hadn’t really believed that it was possible for Allison, or anyone, to love two people at the same time. “But now” — thanks to Tom and Owen — “I do.” Lucky for Teddy, Claire could never stay mad at anybody for loving Allison. She was, after all, Sherri Saum Allison. Just before Richard’s presentation began, Winston asked Maggie to move back to Boston. Or he’d move to Seattle, either way. When she said that she needed time to make a decision — also spreadsheets — he understood. “Get a focus group together,” he joked. “I just don’t think I’m gonna feel any differently about this in a few hours or a few months. But you do you.” 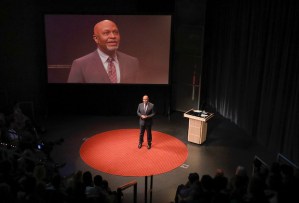 When at last Richard went on, he announced that, with Catherine’s help, he’d figured out how to cure cancer. Come again? Oh no. Something was very wrong with Richard. Projected on screen wasn’t medical data but what looked like a child’s doodles, a smiley face, even. “Dear Lord, he’s drunk,” Catherine whispered to Jackson, watching in Seattle. (Wait, Seattle?!?) Oh, man. This was hard to watch. When eventually Maggie intervened, he didn’t even know who she was. And, thanks to cutaways, we learned that he’d imagined his whole reunion with Catherine. (Damn it.) Maggie feared that Richard was having a stroke, but as the episode concluded, neither she nor we were sure what was wrong with her father.

So, what do you think happened to Richard? Is he dying? Do you like Maggie’s new suitor? Were you stunned to learn about Teddy’s long-ago love affair? (Read Kim Raver’s thoughts here.) Hit the comments.