After all, as the Pearson sibling learned in Tuesday’s Season 4 finale, he’s going to be the father of twins thanks to his random tryst with Kate’s best friend, Madison. (Go here for a full recap of the episode.)

“Kevin has a journey ahead of him, and I don’t want to get too far ahead of it just yet,” series creator/executive producer Dan Fogelman told reporters Tuesday, playing slightly coy when asked whether the pregnancy revelation means that Mads is the fiancée at the cabin with Kevin at the time of his 40th birthday.

Fogelman did say that Cassidy and Sophie, both former romantic partners of Kevin’s who were shown during the episode, “are not done with.”

As Kevin considers a life in which his children, and not a woman, are his great love, the EP noted, “cutting to these two women with whom he shared intense relationships that moved him forward and backwards in different ways, there’s a reason for that.”

He added: “It felt like an interesting time to have a character embark upon parenthood and embark upon becoming a parent with somebody who’s a virtual stranger to him… a different kind story between a man and a woman raising a child together.”

Read on for Fogelman’s thoughts on:

REBECCA’S CLINICAL TRIAL | “It’s going to be a challenging track for Rebecca, moving forward. We also have a big storyline planned for Mandy [Moore] in the coming season in present-day, as an older woman, and also in her past timelines,” Fogelman said. When she and Miguel arrive in St. Louis for the experimental therapy, viewers will have the rare experience of seeing the couple on their own, without the background noise that the extended family usually brings. That isolation will allow the show “to get toward a further understanding of how their relationship bloomed, then stalled, then bloomed again,” the EP added.

THE BALANCE AMONG PAST, PRESENT AND FUTURE TIMELINES | While Fogelman assured everyone that the writers “will never be out of past flashbacks that inform the present,” ensuring that Milo Ventimiglia and others will continue to enjoy screentime, he noted that “different timelines that go past our present-day” will show up in the coming two seasons, “and not just in that deep, deep future where Jack Jr. lives.” 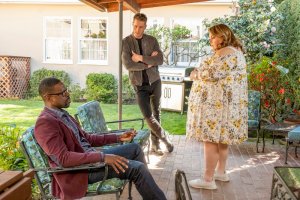 KATE’S WHEREABOUTS | Kate was MIA from the Rebecca-based flash-forward last season… and we didn’t get much of an update on her whereabouts this season, either. Fogelman promised that the Kate question would be answered, but maybe not when you want it to be. “I can’t tell you if it’s going to happen this [coming] season or the season after, but it’ll happen in one of those two seasons,” he said jokingly.

RANDALL AND KEVIN’S ‘BRUTAL’ BRAWL | The EP reminded viewers that when we met the Pearson brothers, they weren’t all that close. So they’re much more used to being at odds than being buds. “This is Cain-and-Abel stuff for these two. This is a fight that goes towards, literally, their inception,” he says of the “brutal” front-yard argument that arrives near the end of the finale. “Two alpha men growing up under the same roof at the exact same period of time, both with two wildly different skill sets… . All of that fed into what we executed.” He added that the grueling scene “was done in one take.”

WHO’S NEXT? | Fogelman wouldn’t confirm that the future version of another — or any — known character would appear in the Season 5 premiere, “although I won’t rule it out.” He did, however, cop to the fact that “there’s going to be something big in the season premiere. Something of that nature, but not necessarily that.”