Ladies and gentlemen, the great Pearson Estrangement of 2020 — and beyond? — has officially begun.

This Is Us‘ Season 4 finale Thursday included a huge, no-holds-barred, no-insult-unsaid argument between Kevin and Randall that made it really clear why the two won’t be talking by the time their shared 40th birthday rolls around in September. After all, how do you come back from a fight in which your brother says he wishes you’d never been part of the family?

True to the show’s history of jam-packed season-enders, that’s only one of the huge developments that occur during the hour. Read on for the highlights of “Strangers (Part Two).” Then make sure to check out what show boss Dan Fogelman had to say about the momentous hour. 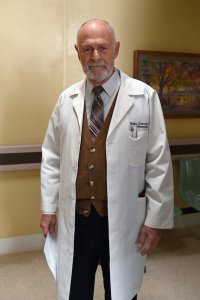 THE ONE WHO ISN’T THERE | In the past, it’s Jack’s/The Big Three’s first birthday, an occasion marked by a pink-white-and-brown cake, Jack ‘s wearing only the Terrible Towel (yet once again having to forego nookie), and Rebecca’s having to leave the little celebration when she’s overcome with tears. Jack later finds her in their bedroom, where she confesses that she can’t stop thinking about Kyle, their triplet that died. Jack knows what she means. “Thinking about him made me feel sad, and I didn’t know what to do with that,” he admits, then asks if she wants to go for a ride.

The entire family visits Dr. K, the obstetrician who delivered Kate, Kevin and Kyle. Jack and Rebecca are looking for some of his homespun wisdom to help them feel better. “I’ve done the thing already about the lemons, right?” he asks. (Ha!) He quickly comes up with the story of how, when his wife lost their first child, the song “Blue Skies” became associated with sad memories of how he used to sing it to her pregnant belly. But then she got pregnant again, and he sang it again, and eventually wound up dancing to the tune at his daughter’s wedding. “That song made us happy, made us sad, made us happy again,” he muses. “The whole human experience, wrapped up in that song.” He adds that he thinks the trick to getting through grief “is not trying to keep the joys and the tragedies apart.”

HORSE SENSE | In a paddock somewhere, a man (played by Josh Hamilton, who has done a jillion TV roles but whom I always will remember as the stick-in-the-mud roommate in With Honors — sniff!) unsuccessfully tries to handle a bucking horse he’s just bought. His young daughter approaches, lovingly teases him about his troubles, then gentles the beast with some pats on the nose and a few whispered assurances. “A little early to be giving up on him, don’t you think?” she later says when the dad calls the horse a “lemon.” He looks on, proud, then announces that he’s going into the office.

In an art gallery elsewhere, a dark-haired young woman named Hailey (played by Reign queen Adelaide Kane) gently rebuffs her friend/co-worker when he asks her out on a date. He correctly surmises that she’s still all wrapped up in the famous dude she hooked up with during a one-night stand. “It’s a movie star,” is all she tells him before scurrying off to help a client. A while later, she gets a message and runs out the door, asking her co-worker to cover for her. He assumes she’s jetting off for a liaison with the movie star.

Who the heck are these people, you wonder? We’ll get back to them in a moment. 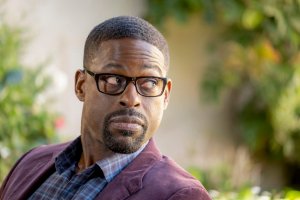 REBECCA MAKES AN ANNOUNCEMENT | The Pearsons gather in California for Baby Jack’s first birthday. Rebecca makes the same cake she did for her own kids back in the day. Randall, Beth and the girls arrive, as does Kevin. Beth isn’t 100 percent approving of the tactics her husband used to get his mom to change her mind, and she knows it’s “gonna be something” when everything is out in the open, so she makes an art of not being in the same room as the Big Three for most of the day. Smart woman.

Eventually, Kevin and Randall wind up alone. Kevin wants to talk about how he’s sorry that Randall is upset Rebecca didn’t choose the trial, but he thinks her staying in California is really what’s best for her. Randall doesn’t say much, but congratulates Kevin on his one-year sobriety milestone.

When Toby takes Jack upstairs for an outfit change, Rebecca says she’s got an announcement (and I laugh out loud as Beth hightails it outta the room): “Miguel and I have been doing the research, and I have decided to do the clinical trial.” Kevin and Kate look gobsmacked. Randall says they’ll visit as much as they can.

ROOM FOR ANOTHER? | Outside, The Big Three discuss their mom’s decision-reversal. Kate and Kevin wonder if she said anything to Randall, and though this is a direct opportunity for him to say something, all he does is mention that maybe she thinks the trial is “an investment in her future.” Then Kate and Toby leave for a secret family thing that no one but them seems to notice or care about.

That thing: a visit to the Neonatal Intensive Care Unit that cared for Jack immediately after he was born. As they look through the nursery window at all of the tiny, tiny babies, Toby apologizes for “not being the best version of myself” in their son’s challenging first year. But he promises that he’s there for her and their family. And then he starts talking about how maybe Jack deserves a sibling. 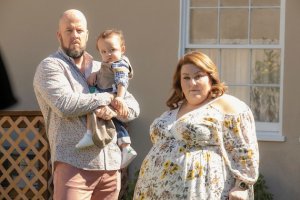 Kate looks troubled. “Toby, I can’t get pregnant again,” she says. But he’s not talking about that. “The Pearsons have a pretty good track record with adoption, don’t they?” he asks. They both think about it on the way home; Toby notes that they’re so high on the happiness of having survived the NICU, their enthusiasm for adding another kid to the family might wane once they leave the hospital parking lot. But then he pulls over right after they start the drive home. “I still want it,” he says. “Me, too,” Kate replies, smiling. “Well, there you have it,” he says, and before you can say “Petfinder for people!” they start looking at adoptable kids on an app.

SURPRISE! | Back to the horse guy, whom we learn is an obstetrician. And as he enters an exam room in his office, we get a bit of a shock (or not, if you’d previously guessed): Madison is his patient, and she’s pregnant and upset. “I still can’t believe I’m here. Bulimia. I didn’t have my period for years. They told me I’d probably never have children,” she says, adding that she hasn’t told anyone about her current condition and that she and the baby’s father “barely know each other… He comes from a long line of great love stories, and this would not be what he wants. There’s no way, there’s no way he’d want this.” (Side note: There’s also no way a human being would ever say that that way, but I digress.) The doctor invokes his daughter’s horse wisdom and tells Mads not to be so sure: “You haven’t even given him a chance to be himself yet.”

WHEN IT RAINS… | Back at the house, Kevin and Rebecca are alone in the kitchen when he asks for a little more detail on her change of heart. “I think I just came to view it as an investment in my future,” she says, and Kev immediately puts together what happened. He charges out of the room, looking for Randall, and Beth stops her mother-in-law from going after him by suggesting that they get Miguel and the girls and leave the house… now. 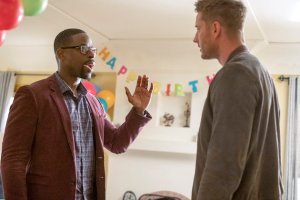 And that’s a good thing, because when Kevin confronts his brother in the backyard, 40 years of resentment and hurt feelings bubble to the surface and explode in record time. “”I did whatever I needed to do to give our mother the best possible chance,” Randall says, resolute. “You couldn’t do it, huh?” Kevin says, incredulous.
“You couldn’t let her side with me, Randall.” Randall tries to leave, and Kevin grabs his arm; for a moment, it looks like the argument might turn into fisticuffs. (Honestly, given what comes next, that might’ve been less painful for both of them.) Randall warns his brother not to touch him. “What are you going to do?” Kevin sneers. “I’m not some out of shape purse snatcher. You going to sucker-punch me?”

Just then, the doobell rings. It’s Madison, saying she and Kevin need to talk. Randall leaves, and Kev attempts to shut her down. “You were lonely, I was heartbroken. I don’t know why we have to re-litigate the whole stupid thing,” he says. She tells him she’s pregnant, and he’s the father. “I’m sorry,” she adds. Oh, and she’s planning to go through with the pregnancy and won’t ask anything of him. “You can still find the great love story you deserve,” she assures him.

THE GLOVES, THEY ARE OFF | In an effort to process the news/not vomit on Kate’s carpet, Kevin goes outside for a moment. That’s when Randall comes back over, and their fight reignites. Kevin challenges Randall’s narrative that he’s always taken care of the family. “You did a good job of taking care of Dad, didn’t you?” he taunts, saying that he would have “walked through literal fire” to save Jack. Randall quietly replies that they’ll never know, because Kev wasn’t there the night of the blaze, “and he died ashamed of you. I think that’s the part that really gets you, isn’t it? The shame that he felt for you and the pride that he felt for me? You’re not even chasing Dad’s shadow, Kevin, you’re chasing mine. But you’ll never be him, and you’ll never be me.” Yeowch. He caps it off by saying Kevin can only ever pretend to be interested in anyone or anything that isn’t himself, and “it’ll just be a performance, a tired, stale performance… like all of your performances.”

Randall gets in his car and leaves. Nicky texts Kevin, congratulating him on his Alcoholics Anonymous achievement, then gets ready to go to a meeting with Cassidy. Far away, in New York, Sophie sees a sexy cologne ad featuring her ex-husband and laughs. And Kevin goes back inside to tell Madison, “Whatever you need, I am all in… The love of my life will be my child.”

But the hits, they just keep coming: “Children,” she corrects him. “It’s twins, Kevin.”

TO INFINITY… | Flash-forward #1 time! At Old Kevin’s house, after he’s dropped the food in the kitchen, he enters Oldest Rebecca’s room and exchanges an unreadable look with Old Randall. Older Nicky gets up to hug his nephew and we see that the older man is wearing a wedding band. Kev’s kids — a boy (whom we’ve seen before) and a girl (whom we haven’t) — come in and embrace their dad, who clasps his mom’s hand… and that’s when we see he’s wearing a wedding band, too. Then Old Kevin stands next to Old Randall and puts his hand on his brother’s shoulder.

… AND BEYOND! | Flash-forward #2 time! Throughout the episode, we’ve watched as Rockstar Jack’s wife, Lucy, goes into labor with their first child. Eventually, that kid — a daughter — is born. And when Hailey arrives at the hospital, breathlessly wondering the sex of the baby, she learns that she’s aunt to a niece named Hope. Yep, Hailey is Kate and Toby’s (probably adopted but maybe not?) daughter.

Now it’s your turn. Grade the finale via the poll below, then hit the comments with your thoughts/theories/predictions!