You can take the girl outta Westworld, but you can’t take the murderous rage caused by being a plaything for entitled douchebags at Westworld outta the girl.

That’s the main takeaway from Westworld‘s Season 3 opener, which finds Dolores wreaking havoc all over the globe in an attempt to get revenge for her previous life as a maltreated android. For the most part, she’s successful — particularly toward the end of the episode, as she seems to acquire a new sympathetic and human friend.

But the HBO series remains insanely complicated, and we’re getting ahead of ourselves. Read on as we break down — by character — what takes place in “Parce Domine.” (And if you need a refresher, make sure to check out our quick Season 2 recap here.)

DOLORES | We reconnect with the blonde badass at the home of a man with a financial stake in Delos; he sees the news of the “bloodbath” at the parks and commands an underling to sell his entire interest in the company. That night, while his wife sleeps beside him, the man is awoken by loud music played over his smarthome’s sound system. He finds a naked woman swimming in the pool behind his house: It’s Dolores. “Don’t you remember?” she asks when he says he doesn’t know her. “After everything we’ve shared. Your bachelor party in the park. You wanted to get some things out of your system before the wedding to your first wife.”

Dolores rigs him with headphones and special glasses that make him relive some of his worst memories; we gather that these were collected while he was an oblivious patron of the park. He re-experiences the “accident” that killed his first wife, whom he beat. Dolores tells him she’s taken most of his money, but what she really wants are some files from a company called Insight, where he worked. When he surrenders those in exchange for his life, she’s about to let him walk. But then he comes after her with a golf club, and she disappears, then reappears behind him. She slips and falls into the pool, hitting his head on the way down; from the way he’s bleeding, it seems like it might be lights out for good.

“Who are you?” his current wife asks as she approaches the scene. “The person who set you free,” Dolores tells her.

The next time Dolores appears, she’s on the arm of a tech scion named Liam (The Newsroom‘s John Gallagher Jr.), whom she’s recently met. When Liam gets word that he has to meet with “the partners,” he asks her to come along. Turns out, Liam works for Incite, a company created by his father that controls all of the technology in Los Angeles. And that control is concentrated in a giant, glowing orb.

When Liam meets with the partners, Dolores cyber-eavesdrops. There’s been a leak, or something, and honestly this was the point in the episode when I started to lose interest in all the veiled talk and vague panic. Anyway, eventually Dolores goes to Liam’s place, where he’s panicking: He wants to turn off the big orb, but he can’t, because his father’s partner locked him out. “No one knows what the system is doing other than its original architect,” he laments. While she’s pushing for the name of his father’s partner, a thug who works for Liam sneaks up and tazes her from behind. He tells his clueless employer that she’s not who she says she is, and reveals that she has a gun in her purse. It looks like Dolores was planning on doing something nefarious to Liam, so the thug thinks they should get rid of her, permanently. Liam takes all of two seconds before he OKs it, adding only, “Just be sure it doesn’t blow back on me.” 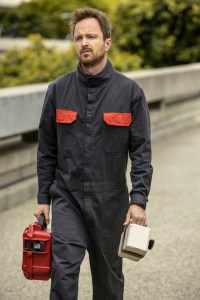 CALEB | Aaron Paul (Breaking Bad) plays Caleb, a veteran who works construction in a futuristic Los Angeles. He takes petty crime jobs on the side to help pay for the medical facility where his aging mother lives, and his ennui is the most defining thing about him. Throughout the episode, he gets several calls from someone we think is one of his combat buddies; we eventually learn this is an AI designed to help him work through his feelings about watching that buddy die.

One night, Caleb takes a crime job that requires him to deliver a pouch to a location… that just happens to be the one where Liam’s thug is putting an unconscious Dolores in a car. Caleb knows something shady is going on, but he leaves after handing off the goods. After he goes, Dolores perks up and kills the men who were helping the thug. Then she tells the thug that she met him when he was “on vacation” — presumably in the park — and she strongarms him into giving her the name of the person who’s really in charge of Liam’s big ball. Then an android clone of the thug pulls up, and Dolores kills the original flavor thug. “The real gods are coming,” she warns, “and they’re very angry.”

But then Dolores gets into a fight with some more of the thug’s henchmen, and eventually winds up bleeding and limping under an overpass. And that’s where Caleb finds her at the end of the episode.

CHARLOTTE | Charlotte — or rather, Charlores — is interim Delos CEO. She meets with other company bigwigs and advocates for restarting host production. They’re horrified, but she blames Bernard for everything that happened in the parks and says it’ll all blow over.

BERNARD | Bernard is working for a beef company and going by the name Armand Delgado. In his free time, he runs trials on himself to see who — if anyone — has been messing with his code. His last contact with Dolores was 92 days ago, we learn.

One day, two guys at the meat plant confront Bernard, calling him by his real name. “It’s not what they say. It’s complicated,” he says when they bring up his alleged crimes. They stun him, and he goes down, warning that “something very bad is coming for you all” and he can’t stop it or save anyone by himself. When they won’t stop mistreating him, he quietly says, “Please don’t hurt them too badly,” then pulls out some kind of fob and presses the button on it. That seems to flip a switch; he gets up easily and beats the snot out of both of them. So the fob allows him to access his host side? When both men have been neutralized, Berhard presses the button again and seems to see for the first time what he’s done. He limps away.

Later, in some Asian seaside town, Bernard gives a man a lot of money and says he’s looking for a friend. He points to a map and says he wants to go to Westworld; the man agrees to take him on his boat. 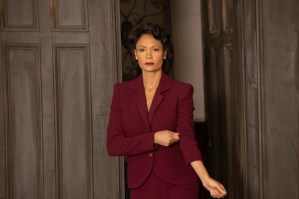 MAEVE | In a post-credits scene, Maeve wakes up — as though she’s just been activated — and finds herself done up like a woman in the 1930s or ’40s. She’s got a gun in her hand, and she’s very confused. There’s a dead man on the floor and another tied to a chair and gagged. When she goes to the window, she appears to be in an European town that’s been overtaken by Nazis; swastika banners hang all over the place, and a military convoy is rolling through town as soldiers torment the locals. This has gotta be another park, right?