THE PERFORMANCE | Viewers tuning in to this week’s This is Us were treated to some fine art courtesy of Moore, who made Rebecca Pearson’s decades-in-the-making trip back to The Met an event worth waiting for.

After missing out on two previous opportunities as an adult to revisit the iconic museum (as chronicled via flashback), elder Rebecca stepped foot back on hallowed ground and recalled to her now-adult sons Kevin and Randall how, during one of her childhood trips there, she became transfixed by a sophisticated socialite silently staring at John Singer Sargent’s “Madame X” masterpiece.

With Rebecca’s eyes fixed on that same painting, Moore dug deep into her Alzheimer’s-stricken alter ego’s soul and pulled out a whopper of a monologue. The Emmy-nominated actress delicately conveyed Rebecca’s heartbreaking epiphany that she, unlike the woman she observed some 60 years earlier who stood for hours just staring at “Madame X,” does not have time on her side. “My life has been full of next times, things I always assumed I would do eventually,” she mused, Moore a picture of poignant, wistful restraint. “But now I realize I am running out of time to do them.”

When Rebecca revealed to her sons that she intended to forego a clinical trial that would’ve taken her away from her home for months, her portrayer beautifully conveyed her alter ego’s unmistakable resolve. And in the scene’s final moments, as the Pearson matriarch proceeded to channel “that woman who had all the time in the world to just stare at a painting,” Moore’s expression deftly toggled between sadness, wonder and hope.

Rewatch her breathtaking four-minute tour-de-force below. 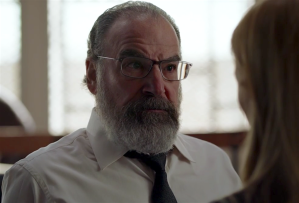 HONORABLE MENTION | Everything fell apart this week on Homeland, but Mandy Patinkin rose to the occasion as a desperately frazzled Saul fought tooth and nail to uncover the truth about the President’s helicopter crash. Patinkin simmered with a righteous fury as Saul snapped at Carrie about the vital need to know what really happened: “It f—king matters! It determines what we do next!” Later, though, Saul’s pleas to preserve the crash site were ignored, and Patinkin’s voice was quiet and defeated as Saul broke the news to Carrie: “Nobody is listening to me.” Eight seasons in, it’s almost a given that Patinkin has been great in this role — he has four Emmy nominations to prove it — but this week’s fiery performance reminded us just how great he can be. 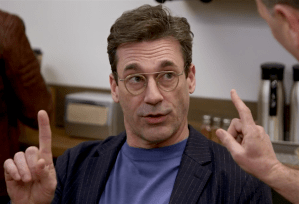 HONORABLE MENTION | We know Jon Hamm best as Mad Men‘s alpha-male ad man Don Draper, of course, but he proved yet again he can do comedy, too, with a riotously funny guest spot on this week’s Curb Your Enthusiasm. Hamm played himself, following Larry around as research for an upcoming movie role, and at first, he just gleefully observed as Larry annoyed everyone around him as usual. But Hamm eventually morphed into “Larry David Junior,” adopting Larry’s quirks and mannerisms and even donning a pair of Larry-esque eyeglasses, and Hamm’s prickly, persnickety impression was marvelously spot-on. By the end, even Cheryl couldn’t stand to be around him — but Hamm’s terrific turn showed us that two Larrys can be even better than one. 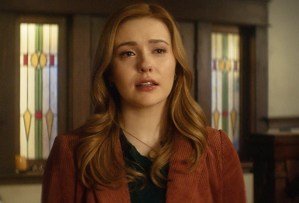 HONORABLE MENTION | It’s a darn shame that Wednesday’s episode of Nancy Drew was pre-empted in some parts of the country due to the president’s coronavirus update, because Kennedy McMann‘s powerful performance deserved to be seen in real time. Like the complicated tale of Lucy’s death, McMann’s delivery fluctuated beautifully between sensational and relatable, otherworldly and painfully human. McMann’s work in the courtroom scene would have been enough to earn her this accolade, so the fact that she was able to turn around and give us an equally devastating gut-punch in the episode’s final moments is just proof of how much this star on the rise is bringing to the table.