Rebecca really is making good on her promise to carpe all the diems she has left: Tuesday’s This Is Us finds her wearing a fancy evening gown, walking the red carpet at Kevin’s movie premiere and soaking in all the Big Apple luxury a movie-star salary can provide.

Unfortunately, Mama Pearson’s ongoing plan to suck out all the marrow of life doesn’t take into account Randall’s desire to give her more diems to carpe. And when Kevin backs their mother’s wish to live in the now — rather than relocate for a clinical trial that offers no guarantees? Well, ladies and gentlemen, the distance between where we are by the end of the episode and the upcoming estrangement between Randall and Kevin doesn’t seem very far at all.

WELCOME TO NEW YORK | True to its title, the episode unfolds over three Pearson-family trips to Manhattan. The episode skips around among them; I’m going to handle them in chronological order. The first jaunt takes place when the kids are preteens, when the gang spends a day in the city on the way to Randall’s debate competition in upstate New York. Everyone gets to choose something New York-y they want to do during the day: Kate wants to have tea at the Plaza Hotel, Randall wants to visit the American Museum of Natural History, Kevin wants to go to a big toy store and Rebecca wants to stop by the Metropolitan Museum of Art, a place she remembers fondly from visits as a child. As she waxes nostalgic about her childhood trips to New York City, Jack grows visibly uncomfortable: How can he ever measure up to her father, who made those jaunts, in her words, “magical”? 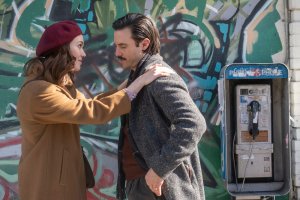 In his desire to appear in control, Jack overrides Rebecca’s suggestion that they switch trains at a certain subway station… and that’s how everyone ends up in Queens. Finally, she pulls him aside and wonders what the heck is going on? He admits that he feels like he can’t live up to her memories of the city, but she tells him not to even try: She left out the part of the story where her dad screamed about not being able to find a parking space, or when her mom got so drunk at lunch they were kicked out of a Broadway show. She assures him that she doesn’t need a recreation of those experiences, and Jack relaxes. Everyone gets a street pretzel. Life is good.

They’re all at the Plaza, sipping tea, when Jack realizes that they’re running out of time to make it to The Met. The kids balk at another museum visit, and Rebecca quickly says they can skip it, but Jack encourages her to go on her own, and they’ll reconvene at the hotel. She tries, but the museum closes just as she arrives. When she meets up with Jack and the kids, Rebecca says it’s no big deal. But Jack decides right there and then that he hasn’t had his New York wish fulfilled yet. So they all go to Central Park and nibble from bags of warm, sugared nuts as they take a nighttime ride in a horse-drawn carriage. “See? You made it your city,” a pleased Rebecca tells her hubs, who promises that they’ll go to The Met first next time. “Yeah,” she agrees happily. “Next time.” (Sniff!)

I’m going to interrupt this kinda sad interlude to bring up something that bugs me throughout this episode: The way the Pearson family talks about going “into the city” makes it sound as though New York is a commuter-train ride away and the trip is something that people do often. The cities are six hours apart by car! But I’ve never lived in Pittsburgh, so please hit the comments and tell me if I’m wrong: Is New York a natural, frequent jaunt for Pittsburgh locals? 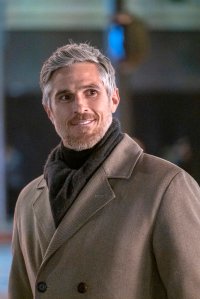 IF AT FIRST YOU DON’T SUCCEED | During the Big Three’s college years, Rebecca, Randall and Beth — though not Kate — travel to New York to see Kevin perform in an acting showcase. He does one of Happy’s monologues from Death of a Salesman; afterward, everyone (except Randall) praises his talent. Kev makes a big deal of introducing his acting teacher Kirby (played by Mandy Moore’s Red Band Society co-star Dave Annable) to Rebecca, and at dinner later, Kevin capitalizes on their friendly-bordering-on-flirty back-and-forth and tries to force them together.

Rebecca suddenly gets up from the table and says she’s going to run to The Met before it closes. Kirby later finds her trying (and failing) to hail a cab, giving them another opportunity to chat. They acknowledge Kevin’s ham-handed matchmaking, then she tells Kirby that Jack died a little more than a year ago. “Does this thing ever start to feel more comfortable?” she wonders. Kirby is divorced with two kids of his own, and he is a musician. Rebecca and Kirby are very comfortable with each other. So when she asks him if he wants to accompany her to the museum, he readily says yes and suggests walking across Central Park (“It’s much prettier”) to get there.

Things go great until a horse-drawn carriage passes and Kirby calls it a “cheesy tourist thing” and “so lame.” Rebecca goes cold quickly, tells him she’s not feeling well, then bails on the stroll and the museum visit. She appears to be close to tears as she walks away.

UNITED WE STAND? | In the present, Kevin and Kate gather in front of her computer for a videoconference Randall has requested. “Last time he called a Code Red, it was to discuss whether or not he could pull off an earring,” Kevin tells Toby. “That was a short conversation,” Kate adds. (Heh.) When Randall calls, it’s to enlist their support in getting Rebecca to agree to take part in an Alzheimer’s clinical trial. But it’s in St. Louis for nine months, and Kevin is against the idea. Still, after Randall repeatedly states that “this is what’s best for her,” Kate says she’ll back him. And though Kevin maintains that Rebecca is in a good place at the moment, he reluctantly says he’ll go along with Randall’s plan, too.

Kevin and Rebecca arrive in New York and stay at The Plaza, though she gently protests that he’s spoiling her. “I really want this weekend to be special for you, Mom,” Kev says, dismissing her concerns and having a rack of evening gowns brought to the room for her to try on. She selects a beaded, longsleeved number that fits her like perfection, and they’re still all excited about that coming evening’s red carpet when Randall arrives to join them for lunch.

Though they’d planned to talk about the trial over the meal, Kevin gets his brother alone to ask if they can do it at breakfast the next morning, instead? “Let her have one great day,” Kev says quietly, and though Randall isn’t psyched about it, he agrees. 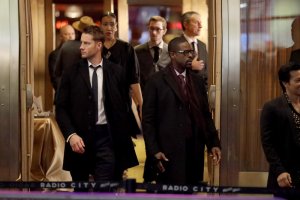 PARTY’S OVER | However, after watching Kevin and Rebecca walk the carpet outside Radio City Music Hall, you can tell Randall is starting to seethe. At the party after the movie (did we know the flick was called Stairs to Nowhere?), Kevin’s agent asks if he’s interested in doing a movie that’s filming in Morocco, then asks Rebecca where she’s staying. Rebecca struggles to remember the name of the hotel but needs Randall to rescue her, something that upsets her after the agent walks away and Kevin goes to speak to a co-star.

“I have such good stretches that I sometimes believe I’m completely fine, and then I go and forget such a stupid word at the most embarrassing moment,” she laments. Randall sees this as a great time to bring up the clinical trial — even though he’d agreed not to — and when Kevin looks over from across the room, he instantly knows exactly what’s going on.

“You couldn’t help yourself, huh?” Kev angrily asks when he returns to his family. Randall says he was just trying to give Rebecca some hope. She steps outside for some air, and the two men really go at it. Randall says he’s the only one who’s taken care of Rebecca since Jack died. Kevin counters that Randall never let him or Kate help. Randall brings up the capriciousness of Kevin’s work and personal lives: “We both know that at any minute, you could take off for Morocco to go do a movie. Or go live in a trailer. Or hook up with Susan Lucci,” he spits. “Well, it was her daughter, but whatever,” Kev counters. (Go here for an explanation of why this exchange is hilarious.)

That’s when things get really nasty. “This whole acting career, that you’ve never really taken seriously?” Kev says. “This is what’s paying for Mom to get the best professional care. This. Unless you want to pay for it with your city councilman’s salary.” Ouch.

“Screw you, Kevin,” Randall grits out. But then they’ve got a bigger problem: Rebecca is nowhere to be seen.

ALL THE TIME IN THE WORLD | Luckily, she’s texted them her location. So Kevin and Randall meet her at The Met, where she’s standing near a painting she first saw as a little girl of 8 or 9. As we’ve seen in flashbacks, Rebecca remembers the museum not so much for the painting — which is “Madame X” by John Singer Sargent — but for the woman she recalls staring at it. Little Rebecca thought it was “so sophisticated, so adult” of the woman to stand there, contemplating the work of art for hours.

Without really taking her eyes off the painting, Rebecca tells them how she always figured she’d come back to The Met as an adult, but her adult life was a series of “next times.” In fact, “My life has been full of next times, things I always assumed I would do eventually… But now I realize I am running out of time to do them,” she tells them. Then she very calmly lays out her desire to spend whatever time she has left with her family: She’s not going to do the trial. And for now, she wants to stare at “Madame X” like “that woman, that woman who had all the time in the world to just stare at a painting.” So they do.

Outside, Randall and Kevin are cool to each other. Randall chooses to walk to the train (To Penn Station? At night? That’s miles from The Met!) rather than get a ride in Kevin’s car. And before he goes, he wants to make one thing super clear to Kev: “This could’ve saved her life.”