Nancy Drew‘s world was forever changed on Wednesday when she discovered that the most important mystery of her life was the one she didn’t even know she was solving.

Let’s start with reveal numero uno: Lucy Sable’s death wasn’t necessarily a homicide. After literally unearthing Lucy’s diary, Nancy discovered that she had secretly been pregnant. She gave birth on the cliff that night, and her subsequent fall was either an accident or — quite possibly, God forbid — her own decision. Either way, Carson Drew is no longer a suspect in what is no longer being considered a murder.

In addition to the secret pregnancy, Lucy’s diary also confirmed that the Hudsons used their influence to destroy her reputation in Horseshoe Bay, turning her into a social pariah. This could have factored heavily into Lucy’s potential suicide, showing “what happens to people in an atmosphere of bullying that comes from the top down. It’s not just a matter of kids bullying other kids. It’s a matter of entire communities disgracing young people for their sexuality, for who they love, for their identity, or for anything.” 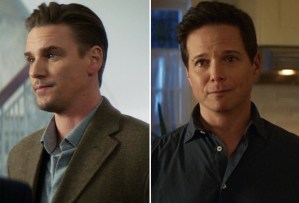 Then came the even more mind-blowing reveal: The baby to which Lucy gave birth… was Nancy! The diary explained that Lucy had gotten close with the Drews, so when the couple discovered her on the cliff that night, she gave them her child for safe keeping. It wasn’t necessarily spelled out in the episode, but “the assumption [that Ryan is Nancy’s biological father] is a sound one to make, though we’ll get a little clarity on that in Episode 17,” the EPs tease.

As for Nancy’s relationship with Carson, the upcoming episodes will be “very rough for both of them. Nancy is trying to piece together her identity, both internally and externally, and Carson is going to have to be accountable for some mistakes he’s made, as well as what he’s done out of love and out of a desire to protect Nancy.”

Based on the series’ initial 13-episode order, this one-two punch was going to happen in the finale, but that plan shifted when The CW blessed Nancy with a full-season pickup. As the EPs note, “We’ve set a precedent on the show where you never know when the case is going to get solved. It’s not always the finale. Sometimes it’s earlier than that, and a whole new case will begin.” 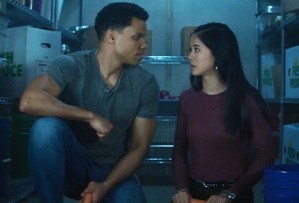 On a slightly more upbeat note, George and Nick enjoyed a steamy kiss this week (yay romance!), despite Bess emphatically warning them both not to give into their urges.

“It was sometime around Episode 10 when we realized that George and Nick were organically, in the stories we’re telling, moving closer to each other,” the EPs tell us. “[Tunji Kasim and Leah Lewis] are so great on screen together. And the characters are kindred spirits in different ways. They’re frank and they’re down to earth, but they also both hold onto a lot of pain, and they often help others before helping themselves.”

Your thoughts on this monumental episode? Did you predict either of the big twists ahead of their reveals? Whatever’s on your mind, drop it in a comment below.