The first season of 9-1-1: Lone Star ended on a high note for the 126, bringing several tumultuous storylines to a close, while also leaving the firehouse doors open for a few fresh starts.

Let’s begin with Michelle, whose long-lost sister has apparently been living in a tent city for the past three years, a discovery she made on Monday after a brutal run-in with the homeless man who attacked her earlier this season. After spending time with Iris, Michelle concluded that she suffered from undiagnosed schizophrenia, but when she tried to bring her home, Iris refused. Following some sage advice from Owen (“You can’t make anyone do anything — even if it’s for their own good”), she agreed to let Iris stay on the street.

Though Lone Star hasn’t officially been renewed for a second season yet, executive producer Tim Minear tells TVLine that we haven’t seen the last of Iris. “If Fox picks up the show, I think [Iris’ return] is going to be the focus of Michelle’s trajectory,” he says. “That revelation will probably change her life in ways she can’t yet know.” 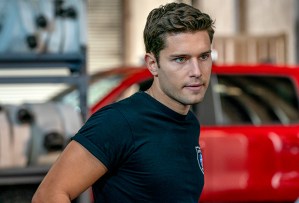 Speaking of revelations, T.K. ended the two-hour finale by telling the other firefighters about his struggle with addiction. After waking up from his coma, meeting the little kid who shot him (awkward!) and surviving what initially felt like the end of the world, Owen’s son is more certain than ever that he belongs in the firehouse. More importantly, he’s also more certain than ever that he belongs with Carlos.

Minear says that a second season would show us T.K. and Carlos’ courtship, “which is what a lot of fans feel like they missed, or they think happened off-camera, which it didn’t.” As he explains, “They never really had a courtship. Things started really hot and fast, then T.K. backed off, and then life sort of took over. Carlos doesn’t really know T.K. all that well, and the audience doesn’t know Carlos all that well. We’ll be able to learn more about who Carlos is through his interactions with T.K.” 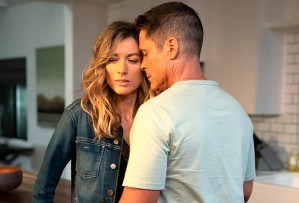 T.K. arrived upon that decision with a little help from Zoe (played by The Detour‘s Natalie Zea), someone Minear hopes will remain in the Lone Star orbit: “I think Zoe is amazing and I think Natalie is amazing. She fills the screen with character, and she and Owen have such natural chemistry. I like Owen having someone he can talk to who isn’t a first responder, but it smart enough that she can understand what he’s going through in ways that he can’t.”

(Unfortunately for Lone Star, Zea was recently cast in a pilot for NBC, something Minear says he expected. “We were like, ‘As soon as pilot season starts, she’s going to be snapped up in a second.’ And she was!”)

And you didn’t think we’d ignore that not-so-subtle reference to 9-1-1‘s Chimney, did you? While discussing T.K.’s recovery process, Judd told the gang, “I heard that a firefighter in Los Angeles had a piece of rebar go through his brain, and he was back at work in less than a month.”

As for whether we’ll ever get to see Chimney and Judd discuss this in person, Minear says, “I believe you will.”

What did you think of Monday’s Lone Star finale? And what are your hopes for a yet-unordered Season 2? Grade the two-hour event below, then drop a comment with more of your thoughts.