Lone Star continued its two-night premiere on Monday with one of the darkest emergencies in 9-1-1 history (thanks, Mercury poisoning!), followed by the introduction of the spinoff’s first uniformed coupling.

Actually, “coupling” might be too strong a word at this point. Sure, TK and Carlos enjoyed a little afternoon delight this week, but TK was fully clothed and out the door before Carlos had a chance to catch his breath. And when TK returned later that night for another round, only to discover that Carlos had prepared — gasp! — a romantic dinner for two, he was back out the door in record time.

TK’s readiness to begin a new relationship is “something we’ll be navigating this season,” Ronen Rubinstein tells TVLine, promising the usual “ups and downs” that all on-screen couples face. “But the thing you have to remember is that everything TK went through is still so fresh. It’s only been a few weeks since he tried to kill himself, which is something I kept in mind as we worked our way through the first 10 episodes. He’s still dealing with so much.”

That said, Rubinstein is hopeful that TK and Carlos have a future together, as he has nothing but good things to say about his scene partner. “The first time I met [Rafael Silva] was in our chemistry read,” he says. “As soon as he walked in and we started the scene, everybody in the room was like, ‘That’s it. That’s the guy.’ I remember one producer saying, ‘If that’s what you two can do in a casting office with a blue curtain behind you, just imagine what’ll happen once we get on set.’ And you really do see the sparks fly, beginning with the first episode when they meet at the honky-tonk.” 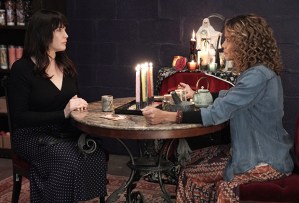 * It may not be much to go on, but Michelle learned that her sister left her boyfriend’s house with someone in a blue pick-up truck on the night she disappeared. Michelle also performed an expensive little ritual at the behest of a local witch, but the verdict is still out on whether that accomplished anything. (I was a little worried that she might start a fire when she lit that $100 bill, but at least she knows a few good firefighters.)

* Even though it meant giving up his daily haircare regimen, Owen agreed to a new course of cancer treatment that would almost certainly prolong his life. And for what it’s worth, I thought he looked pretty good in his bald-cap nightmare.

Your thoughts on 9-1-1: Lone Star‘s second outing? Grade the second part of the premiere below, then drop a comment with your full review.