THE PERFORMANCE | Though Ray Perry, in the end, dodged a career-ending bullet, the road to that realization was a rocky one, thanks to Brown Jr.’s perfectly calibrated performance in the conclusion to what was essentially a three-parter.

As Bravo Team conducted an After Action Review to discern what about their impetuous op to rescue Dr. Craig instead got the hostage killed, Ray senses that Sonny was spinning his take on events to save the team’s collective bacon. Sonny argued that the story they agreed on was in the best interest of the Bravo family, but Ray countered, “Brotherhood is also about being truthful with each other.

“I’m waking everyone up,” Bravo 2 declared. “We need to get to the truth.”

The truth Ray then arrived at, however, pointed the finger at him, as he suspected that he lobbed the wrong kind of grenade into the room where the hostage was held. Here, Brown Jr. communicated both Ray’s frustration with making a rookie mistake, and the short- and long-term consequences of same. “It’s staring us right in the face,” he told Jason. “I killed Dr. Craig.”

Clay, Sonny et al conspired to steer Ray away from a career-ending confession, but he would have none of it. “Have any of you being reading the paper lately?!” he argued. “Every other week there’s a new story about the teams” and Navy SEAL wrongdoings. Quiet huddles to fashion half-truths “is how those incidents started.”

When Sonny beseeched Ray to reconsider, Brown Jr. tapped into the characters’ rich history, the bond they share. “I couldn’t ask for more loyalty. And there’s nobody I’d rather have backing me up,” he noted. “But this is my decision. So back me up on it.”

Capping Brown Jr.’s standout episode were a pair of immensely powerful scenes. “Everything changes the moment I walk off this plane,” Ray observed to Jason upon touching down back home. “I don’t know what life looks like without that connection” the team provides, he said. “I love my family, but without Bravo I walk through this life alone.”

Then, once the actual truth came out, it fell on Ray to mete out the punishment for Vic, who had kept silent about it being his “homewrecker” that accidentally killed the hostage. “I forgive you… but I don’t trust you,” Ray told the mentee who had “shattered” any bond they shared. Ray then sliced off the patch that tied Vic to Bravo, admitting to Jason it was “the hardest thing I’ve ever had to do,” stripping a man of his newfound “family.” But as Ray noted, “wearing the trident’s not a right. It’s a damn privilege.” 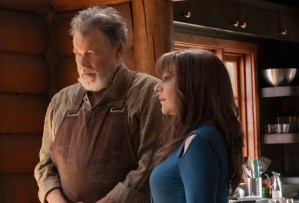 HONORABLE MENTION | Star Trek: Picard‘s nostalgia factor was at maximum warp this week, as Jean-Luc reunited with his old Enterprise pals Will Riker and Deanna Troi, played by Next Generation veterans Jonathan Frakes and Marina Sirtis. This wasn’t just a hug-filled cameo, though; Frakes and Sirtis added layers of hard-earned wisdom and melancholy to their beloved characters. Sirtis was beautifully resilient as Troi spoke to Jean-Luc about the untimely death of her son Thad, and Frakes tempered Riker’s usual headstrong nature with a couple decades’ worth of life experience. (His long talks with Jean-Luc were a joy to watch unfold.) Yes, it was a treat just to see Riker and Troi again… but it was also refreshing to see the new perspectives that Frakes and Sirtis brought to a pair of Trek fan favorites. 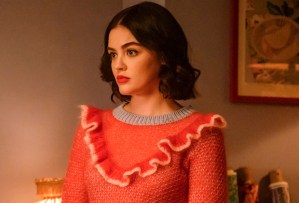 HONORABLE MENTION | While a polar vortex hit Manhattan on Thursday’s Katy Keene, star Lucy Hale proved to be her own force of nature with a heartbreaking performance that shook viewers — not to mention Jorge, who had just accidentally broken her sewing machine — to their core. Katy’s candy coated world was temporarily shattered, and while we watched her struggle to pick up the pieces through tears, we finally got to see the character evolve from quirky comic cutie to a fully realized human being. Vulnerability, it turns out, is Katy’s strongest suit. 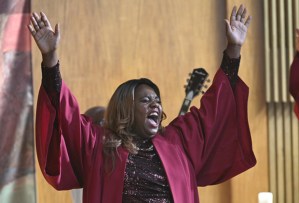 HONORABLE MENTION | Alex Newell took viewers to church and back on Sunday’s episode of Zoey’s Extraordinary Playlist, which finally peeled back a few key layers of Zoey’s soulful super. Mo’s transformation from flamboyant DJ to buttoned-up choir boy was touching, if not totally heartbreaking, revealing a vulnerability that proved Newell can be just as powerful in the quiet moments as he is when he’s belting to the rafters. That said, the additional insight into Mo’s struggle only made his final performance of “This Little Light of Mine” (in full wig and dress!) all the more enjoyable. Shine on, Newell!