You didn’t like it. You really, really didn’t like it. In fact, based on the poll that TVLine ran Thursday evening, more than half of you hated the fact that Grey’s Anatomy dealt with original cast member Justin Chambers’ abrupt departure by having Alex leave bride Jo to form a family with former wife Izzie and their surprise twins (read full recap). 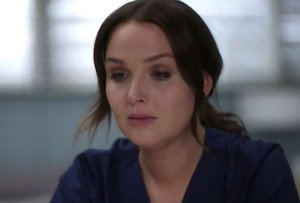 I, on the other hand, bought it, especially considering the limited options that the long-running ABC drama had at its disposal. With Chambers unavailable to be seen, only heard, EP Krista Vernoff & Co. could’ve written a neat and tidy resolution to Karev’s storyline that dropped him in a pine box with his halo still intact. Instead, the show took a bigger swing, giving the beloved character a happy ending that was as messy and complicated as life itself.

Do I think that Alex would really walk out on Jo and Meredith, Richard and Bailey, without explaining why in person? No. But again, Chambers had left the building, so to speak. And I do believe that Alex would always have felt a pull to his old flame and would have held onto a curiosity about her. (Do any of us ever truly forget our exes?) Plus, given his traumatic childhood, even with one eye squeezed shut, I could totally see how the revelation that Izzie was raising kids — their kids — would be a total game-changer for the peds doc. That’s a no-brainer, all-hearter.

A lot of commenters have suggested that this turn of events has undone years of growth on the part of the erstwhile Evil Spawn. I disagree. Alex is doing something utterly wrong (out of nowhere, dumping his wife with a Dear Jane letter) in order to do something else, something arguably bigger, right — give his and Izzie’s twins the kind of upbringing that he and Jo could only dream of.

So for me, Alex isn’t ruined at all. He remains what he’s always been: perfectly imperfect. In other words, human. And while I’m certainly sorry to see him go, I appreciate the daring way that Grey’s chose to have him leave. You may now massacre me in the comments.