This week on The Good Doctor, Shaun was determined to prove to Lea that they can work as boyfriend and girlfriend — but his efforts proved futile.

Shaun was intent on changing Lea’s mind about them as a couple. He said as much to Glassman at the beginning of the episode. Lea gave him very specific reasons why they can’t be together, but he was certain he could work through some of the eccentricities she pointed out to him.

During a work day, he called Lea over to the apartment to show her that he was capable of doing things differently: He un-alphabetized the canned goods in the pantry, and he placed the toilet paper roll on the holder the incorrect way, just how she liked it. Lea, however, was not impressed. She called Shaun out for making her drive all the way across town in the middle of the day when he could have just waited until later that evening. To her, this was just another signifier that Shaun is incapable of change; he’s still determined to do things his way, on his own time.

Throughout the hour, Shaun sought out the advice of his friends and colleagues. Surprisingly, the best advice came from Morgan. “Shouldn’t we be with someone who makes us a better version of ourselves?” Shaun asked. “Maybe,” Morgan answered. “But trying not to be autistic won’t make you better.”

At the end of his shift, Shaun confronted Lea and insisted that they go on a proper date. That’s when Lea, who already offered a silent rejection at the end of Episode 16, confirmed to Shaun that his previous hunch — that because he’s on the spectrum, she doesn’t think they can be together — was correct.

“Shaun, you are autistic,” she said, bluntly. “You can’t fix that… You are who you are, and I am who I am, and the two of us will never work.”

Rather than respond, Shaun turned his back to Lea and walked away. He went home and entered his bathroom, where he removed the toilet paper and placed it back on the holder the correct way. This suggests that he’s done trying to change himself to be Lea’s ideal partner. 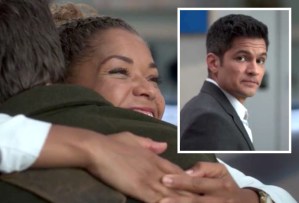 Back at the hospital, Claire’s friend Dash paid her an unexpected visit, where he gifted her a box of the late Kay’s recipes… and asked her out on a date. Claire wasn’t sure whether or not it’d be a good idea to strike up a romance with the widower, but Melendez encouraged her to do what makes her happy. (Also worth noting: The way Melendez looked at Claire when she first embraced Dash.)

The episode also set up a new arc for Park, who just last season was trying to repair his relationship with estranged wife Mia and their teenage son Kellan. This week, Kellan paid Dad a visit and got caught vaping on hospital grounds. When Park reprimanded him, Kellan suffered a massive panic attack. Later, when Park attempted to get to the bottom of what was bothering his son, Kellan confronted Dad about continuing to let his work get in the way of their relationship. It was also revealed that Park and Mia failed to reconcile.

As for the Patients of the Week…

* Melendez, Shaun and Claire worked on Alice Gottfried (The Handmaid’s Tale‘s Ever Carradine), whose adrenal condition went misdiagnosed for half a decade. The almost-decision to have a life-altering procedure nearly cost Alice her marriage to Owen (played by Freddie Highmore’s Bates Motel co-star David Cubitt — aka Sam Bates), as well as her relationship with her daughter Ruby, but all worked out in the end. Shaun came up with an experimental surgery to save Alice’s mobility.

* Andrews, Park and Morgan worked on Wes Keller (Lost vet Harold Perrineau), a former drug addict who turned his life around and was now a mentor for a group of at-risk teens. When Wes went into kidney failure, one of his mentees — an emancipated 16-year-old named Max — wanted to be a living donor. Andrews, Morgan and Park voted in favor of letting Max donate the organ, but Lim wouldn’t allow the transplant to move forward; the risks for Max were too severe, she said, and he needed a grownup to have his back. She confronted Wes about her decision, then agreed to lie to Max and tell him that he wasn’t in fact a match for Wes.

What did you think of The Good Doctor Season 3, Episode 17: “Fixation”? Can you continue to champion a Shaun/Lea relationship now that Lea has acknowledged why she doesn’t want to be with Shaun?