This week on The Good Doctor, Claire’s college roommate makes an unusual request, while Shaun and Morgan’s patient bargains with his brother over life and death.

Let us begin with Claire’s friend Kay (Witches of East End‘s Rachel Boston), who’s dying of Stage 4 ovarian cancer. She has a month to live, and Claire wants to make sure that she’s as comfortable as possible. And so she approaches Melendez and Park about operating on Kay. She recommends a surgery to remove a tumor that’s been keeping Kay in a constant state of pain. It’s not only a success, but leads to an unexpected discovery: The cancer hasn’t spread beyond Kay’s abdomen, meaning she’s a candidate for HIPEC treatment. With a second procedure, she’s looking at six more months.

Kay’s husband Dash (Dear White People‘s John Patrick Amedori) is worried that an additional surgery can backfire and take what little time they have left, but Kay is determined to go through with it. She also has a favor to ask — a really weird favor. She wants Claire and Dash to go out on a date. Like, before she’s even dead. Like, later that night. The way she sees it, this’ll allow her best friend and husband to move on once she’s gone. Claire and Dash think she’s nuts, but ultimately agree to the date. An awkward dinner ensues, but there’s definitely chemistry there.

Before her procedure, Kay asks Claire to promise her that she’ll give things with Dash a real shot. Claire says it’s too much pressure, which leads to an argument about Kay’s constant meddling in her life. (Maybe table this fight until Kay comes out of surgery?) Anywho… Kay pulls through following a minor complication. Claire visits her in recovery to apologize, and tells her bestie that she has to stop worrying about everyone else. It’s time to let her loved ones worry about her and what she needs to feel comfortable during what little time she has left.

Afterwards, Claire heads to Melendez’s office to thank him for all of his help. She tells him that he’s the most gifted surgeon with whom she’s ever worked, which is essentially her way of apologizing for overstepping her bounds with anorexic patient Louisa back in Episode 5. She says she’ll continue to report to Lim if that’s what he wants; he says it’s probably for the best. (Is Melendez waiting to hear the words “I’m sorry”? Does he think Claire works better with Lim? Or is there some other reason he doesn’t think she should work under him anymore? Hmmm…)

Shaun and Morgan, meanwhile, work with Lim on Santiago (Brockmire‘s Hemky Madera), the co-owner of a construction company passed down by his father. He takes a fall at work while holding a nail gun, which fires a rusty nail into his abdomen and ruptures his kidney. When the doctors go in to operate, they discover Santiago was born with only one kidney. His brother Armando (Colony‘s Gonzalo Menendez) is a match for a transplant, but before he goes through with the operation, he wants Santiago to agree to sell the family business. Santiago refuses, insisting he’d be giving up on their father’s legacy. Armando tries to get through to his brother, reminding him that Dad wasn’t such a nice guy, but Santiago won’t hear it.

Armando eventually agrees to donate his kidney anyway. He asks Shaun for the consent forms, at which point Shaun reflects on his own troubled relationship with his father, who told him that he wished he’d never been born and wasn’t worth the trouble. But Shaun knew his dad was wrong because older brother Steve always looked out for him, even when it made his life harder. The parallels bring Armando to tears. The transplant is ultimately a success, and Santiago thanks his brother for his kidney. 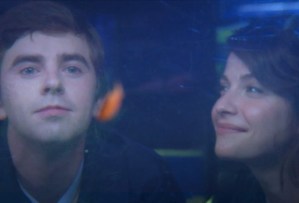 * Shaun and Lea visit a pet store and bring home a goldfish named Hubert — hence the episode’s title. But Hubert isn’t long for this world, and dies by the time Shaun returns home from work. Lea is upset, and proceeds to open up about what happened in Hershey. She explains that she went back so she could help her brother save the family’s auto body shop, but instead they tanked it together and destroyed their relationship in the process. The way she sees it, she’ll never be able to put her life back together if she can’t even keep a fish alive. Shaun then leaves the apartment with the fishbowl, and brings it to the hospital for testing, which proves the fish had a parasite. Shaun then takes Lea back to the pet store with the results and shows them to the cashier, who reluctantly agrees to let them pick out a replacement fish. Lea thanks Shaun for making her feel better, then gives him the sort of look that’s bound to melt a few hearts.

* Glassman goes in for his latest treatment. In the waiting room, a young cancer patient offers the former hospital head his yo-yo. Glassman tries to teach himself a few tricks, thinking it’ll help with his sequential memory. After his treatment, he goes to retrieve his belongings from his locker, but can’t find his wallet. He marches into Blaize’s office, convinced that someone stole it. She then retrieves said wallet from a box on her desk and reminds him that he asked her to hold onto it before his treatment. Glassman tells her not to read too much into it, but his forgetfulness seems to be another side effect of the surgery.

What did you think of The Good Doctor Season 2, Episode 7? Hit the comments with your reactions!