Warning: The following contains spoilers from the Feb. 24 episode of The Good Doctor.

The Good Doctor reached a moment of clarity on Monday, in an episode that will forever change the Freddie Highmore-led medical drama.

In Season 3’s 16th installment, Shaun admitted to himself that while he did in fact love his ex-girlfriend Carly, the person that he wants to be with is Lea. But when he confessed his love to his best friend and said that he wanted to be her boyfriend, her response was not what he had hoped it would be — at least not entirely.

“I love you, too,” she said. “But you know me. I am selfish, and I am so, so needy… I am a total mess,” and “you need things a certain way.” That’s when Shaun posed a difficult (and truly heartbreaking) question: “Because I have autism?” he asked. “You don’t want to be my girlfriend because I have autism?” Lea couldn’t bring herself to answer. Overcome with emotion, she walked out of the apartment without saying another word, as a single tear dropped from Shaun’s eye.

In separate interviews, TVLine spoke with Highmore (who also directed the episode), as well as his co-star, Paige Spara, about that pivotal Shaun/Lea moment and where the series’ central couple goes from here.

TVLINE | Freddie, this is the second episode you’ve had the chance to direct, following Daniel Dae Kim’s Season 2 debut. What was different about this experience from your last?
HIGHMORE |  Last year, it was really exciting to introduce Dr. Han, and to kick the end of the season off in a new direction. This was a little bit [different]. You had this one especially big moment [at the end of the episode between Shaun and Lea] that was a long time coming.

TVLINE | Paige, when did it dawn on you just how big of a moment this was in the Shaun/Lea relationship? There’s really no turning back after that final scene…
SPARA | When it finally hit me differently was actually when we were rehearsing the scene… I couldn’t say [the words] without getting emotional, and that’s never happened to me before. Then I was nervous because I was, like, “Okay, is that going to happen every take?” 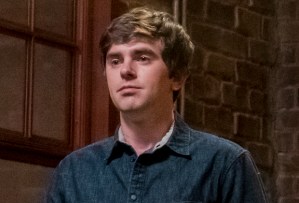 TVLINE | It must have been special to have Freddie direct this particular episode. Did the two of you take a second to acknowledge the significance of this one, and what it means for your characters moving forward?
SPARA | Yeah, absolutely. You know, he’s such a great director and partner to have because he’s so generous with his time, and he really gives you space to kind of understand this pain individually and what it means for you, and then he’s able to go at it from that angle, giving you that emotional freedom to kind of feel what you need to feel for that scene, and then he’ll work around that. Toward the end of the scene, it was even hard for me to say the lines.

TVLINE | It sounds like the scene was ultimately shaped by the conversation.
SPARA | It was originally written, “I’m so sorry, Shaun,” and then I kiss his cheek and walk away.

TVLINE | But instead it was just—
SPARA | … Just look at him and convey however you feel to Shaun in that moment, and walk away when you feel like you need to walk away. And to get that freedom, especially with network TV, is very rare… and the fact that [Freddie] knew what that scene entailed and what it called for, and actually gave me permission to do that, that was huge. I feel like it made the scene what it was actually supposed to be about, yet relatable to anyone who has dealt with such a hard conversation.

TVLINE | It sounds like Freddie was able to construct the scene in a way that might not have happened had you been in the hands of a different director.
SPARA | Absolutely. Freddie [has] such a curious mind when it comes to relationship dynamics and why things are the way they are, and he can pull from that curiosity and apply it to [the scene], as opposed to just getting the take, getting the boxes checked. It’s never about that for him. His work always… comes from a place of openness and curiosity, and I think that is just so needed, especially for [relationship drama], because, you know, what the f—k are relationships? They’re so f—king confusing…

TVLINE | Freddie, what stood out to you when you first read the script?
HIGHMORE | It’s always much more interesting to leave things unsaid, or leave things hinted at when one can, instead of being overly explicit. The last scene is an example of that. [Executive producer] David Shore is aware of that, and [fellow EP] David Hoselton, the writer on this episode, [does] such a good job of making those emotional moments land without them feeling overwritten.

TVLINE | What did you make of Lea’s inability to respond when Shaun asked if his autism is preventing them from being together?
HIGHMORE | I think that Shaun has hit on a horrible truth that Lea has perhaps not thought about before this moment. Her lack of response… at least signals that there’s something [to] what Shaun is saying.

TVLINE | Paige, what is your take on Lea’s response (or lack thereof)? Was she reckoning with this horrible truth, as Freddie suggested? Was she too overwhelmed to get out words?
SPARA | I think it was just a cluster of both of those [things]… Lea does love Shaun. Lea does have a bond with Shaun. That would be her person. However, would she be the person for him? I can’t be selfish in this moment and just say, “I love you. Let’s give this a shot.” There are so many other outside factors that are at play here, and… it’s this uncomfortable reckoning of being responsible for someone else, not just under the umbrella of love, but in a different way for someone else’s wellbeing… and I think that hit her in that moment. That’s why it’s just so overwhelming [and] a bit confusing. 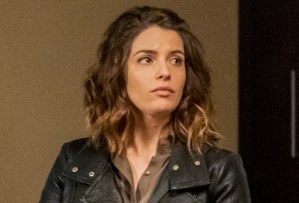 TVLINE | What sort of thoughts do you think are racing through Lea’s mind?
HIGHMORE | I think there’s a part of her that sort of hates herself in this moment. She feels that Shaun is the person that she should be with, and she recognizes that they’ve got this bond, or that they share these kindred spirits, but for whatever reason — and perhaps it has to do with the question that Shaun asks — she just can’t commit to [him], and she doesn’t understand that about herself. She’s questioning whether she’s a good person for even thinking these things or having those thoughts in her head.
SPARA | I think she hates the fact that she is feeling this kind of way, and she’s looking in the eye of this [man] that love her, and she just doesn’t know what to do with it. What does it mean and where [does] it fit in her life and in his life? … I think it’s really hard for her to not know that answer in that moment. And it’s also scary because even when she looks ahead, she still doesn’t see an answer, and then she’s just feeling very, very vulnerable and also admitting the love that she has.

TVLINE | How do you expect the audience to react to Lea’s silence?
HIGHMORE | One of the really important things [to remember], and hopefully that comes across about this last scene, is [that the audience shouldn’t hate Lea] for feeling the way that she feels. She isn’t prejudiced toward Shaun because he has autism. It’s not as simple as that.

TVLINE | Moving forward, has Shaun lost hope that he’ll ever be with Lea?
HIGHMORE | He’s a pretty dogged person, so he doesn’t see this as being… something that they can never get past, or discuss to try and understand [Lea’s feelings] on a deeper level.

TVLINE | Where do we pick up in the following episode?
SPARA | You’ll find these characters addressing that conversation and addressing the questions that were brought up… We will see Shaun handle it in his way, Lea handle it in her way, and when those two ways come together, we’ll actually see why Lea [was] hesitant in the first place.

What did you think of The Good Doctor Season 3, Episode 16: “Autopsy”? And what’s your take on the final scene? Drop your thoughts in a comment below.