This week on The Good Doctor, Daniel Dae Kim scrubs in as new chief of surgery Jackson Han, and immediately takes issue with Shaun. Meanwhile, Melendez operates on a wealthy CEO, while Glassman tries his best to keep to himself during chemo.

Han is a no-show for his own welcome brunch, hosted by Andrews and Allegra. Instead, he makes his debut in the OR, assisting Lim, Claire and Shaun on a procedure involving a newborn named Percy. She has multiple life-threatening birth defects affecting her heart and abdomen. Han insists on operating with music, which throws Shaun off his game. He then puts Claire on the spot and quizzes the residents, mid-procedure.

Percy is stable and moved to the prenatal unit. Shaun goes to check on her and is stopped by her parents, Diane (Teen Witch’s Robyn Lively) and Nigel (Hell on Wheels’ Peter Benson). Diane asks Shaun if taking antidepressants had anything to do with Percy’s defects, which he confirms, bluntly, without any regard for Diane’s feelings. Word gets back to Han, who reprimands Shaun in front of Lim and Claire. Afterwards, Lim steps out with Han and tells him that she’s not a fan of his shame-based learning tactics. Unfazed by her concern, Han insists that the real problem is how she’s willing to defend Dr. Murphy.

Afterwards, Lim advises Shaun to steer clear of Han unless he’s asked a direct question. Shaun is willing to comply, but Claire argues that it’s the wrong move, explaining to Lim that had Shaun backed down at the start of his residency, Melendez would still have him on suction duty. 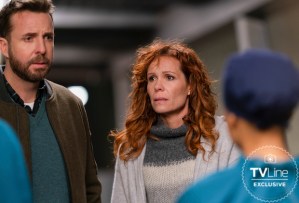 Shortly thereafter, Percy takes a turn for the worse and is placed on full cardiac support. Shaun has an “A-ha!” moment and figures out a way to potentially save the baby’s heart, but the doctors lack confidence that they’ll be able to repair her bowel. In fact, there’s a 90 percent chance that the bowel repair will prove impossible, even if the cardiac operation is a success. And so, the doctors present Diane and Nigel with two options: (1) They can proceed with the heart and risk that Percy dies slowly from malnutrition, or (2) turn off life support and let Percy pass quickly and painlessly.

When Diane and Nigel are unable to make a decision on their own, a judge is called upon to make a decision on their behalf, based on the recommendation given to him by Dr. Han. Han thinks they can beat the odds, so the doctors scrub in to operate on Percy. Shaun and Han focus on the heart, while Claire and Lim work on the abdomen. When they turn off cardiac support, Percy’s heart functions on its own but overpowers her lungs, making it impossible for her to survive without a ventilator. All hope appears lost — so much so that Han and Claire scrub out to inform Diane and Nigel that they’re about to lose their daughter — but Shaun comes up with a last-minute save that reduces pressure on the infant’s lungs. There are still one or two more surgeries in Percy’s future, but Han assures Diane and Nigel that their daughter will pull through.

At the end of the night, Han approaches Shaun at the bus stop. He applauds the resident’s remarkable diagnostic skills and tells him that he’s an asset to the hospital. Be that as it may, though, he won’t allow Shaun to continue on with his surgical residency. He’s already put in a call to the director of pathology and coordinated Shaun’s transfer. “No, thank you,” Shaun says. “I am a surgical resident.” But it’s not up to him. “You were,” Han says, “and you’re going to do great work in pathology.”

* Han gets off on the wrong foot with Melendez. He cancels Melendez’s hernia operation without warning, then assigns the cardiothoracic surgeon to do a full diagnostic workup on a wealthy CEO named Minesh Goyal. Melendez brings in Park and Morgan to assist on a full-body scan, which reveals a tumor. It’s likely benign, but the doctors are unable to biopsy due to the location of the mass. This leaves Minesh with a difficult choice: Proceed with a high-risk operation to remove the tumor and risk paralysis, or leave it alone and hope it doesn’t metastasize. Minesh decides to have the operation, during which Melendez, Morgan and Park are forced to remove the nerve that controls Minesh’s left foot in order to get the tumor out. The final pathology report will let them know whether it was worth it, but Minesh isn’t interested in the results. What’s done is done.

* Glassman is reluctant to befriend Larry, a young man in chemo who’s trying to make the best of a lousy situation. Unlike Larry, Glassman doesn’t want to take on cancer as an identity. He eventually softens his stance and befriends both Larry and a fellow patient named Candice.

What did you think of The Good Doctor Season 2, Episode 15: “Risk and Reward”? Hit the comments with your reactions!