Warning: The following contains spoilers from the Feb. 17 episode of The Good Doctor.

The Good Doctor‘s first relationship came to an end on Monday, in an episode that set up the final arc of Season 3.

In “Unsaid,” Dr. Carly Lever (played by Jasika Nicole) broke things off with Shaun (Freddie Highmore). After an impromptu double date at a karaoke bar, Carly realized that Shaun and Lea are in love, whether or not they are ready to admit to themselves — or to each other.

The episode also found Claire and Melendez contend with the anonymous favoritism complaint submitted by Morgan. Lastly, Lim confronted Morgan — who was finding it harder and harder to operate with her secret rheumatoid arthritis diagnosis — about filing said complaint to inoculate herself in the event that she commits a fireable offense.

Below, Nicole tells TVLine how Carly’s decision manifested itself into a real heartbreak, how she first found out about the split and what it was like when it finally came time to shoot the breakup scene.

TVLINE | What was your reaction when you first read the script and got to the final scene?
I actually found out a few episodes ahead of getting the script that the breakup was coming, so that was my first confirmation that this relationship wasn’t going to end happily ever after, and it was the strangest experience that I ever had as an actor. I have felt so personally connected to Carly’s character, to Shaun’s character — and to this storyline in general — that I actually started to experience the emotional turmoil of going through a breakup.

TVLINE | That sounds intense. What was that like?
For about two weeks, I was just really sad. I wasn’t motivated to do anything. I was down. And it took me a few days to realize that this is just how it feels when you go through a breakup. I’ve been with my partner for so long that I’m not that familiar with that experience anymore, and I realized that I felt rejected, I felt sad. I said to Freddie, “I’m sorry that I’m not in a good mood. I’m sad that we’re breaking up.” And he was so sweet.
I don’t know if this is something that people who aren’t actors would fully understand, but the part of me that is Carly — and there is certainly a part of me that is Carly, because I’m her body and I’m her voice — that part of me felt connected and absolutely enamored with this other character, so it kind of felt, like, “You didn’t get the guy. You didn’t get the guy, Carly!” So that’s what I dealt with. But I’m glad I found out a little bit earlier so I could go through the emotions. But then when it came time to film it, everything came flooding back. 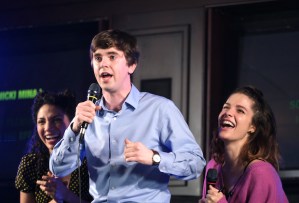 TVLINE | Who broke the news to you?
We are lucky in production to get to have the writers come to set and see their work being produced while we’re filming. And one of the writers, I’m not going to say who it was, but he mentioned something about a karaoke scene, and on my Instagram, I’ve been doing karaoke — I call it “Self Care-aoke,” in support of the show and to promote the episode that night — so I was, like, “Oh my gosh! Real life intersecting with artistic life! This is great! I do karaoke videos all the time!” And he said, “Yeah, but, it’s not going to be a good scene.” So I found out under the table or whatever, and obviously I kept my mouth shut, and I kept hoping that maybe he got it wrong. Maybe that’s not what happens. And then I read the episode and I was, like, “Dammit. It’s happening.”

TVLINE | What did you think of the scene itself?
They wrote it so beautifully, and it actually felt kind of nice to know that Shaun wasn’t breaking up with Carly, which would have made me feel more rejected. She could see what was going on. I felt… proud of her. She’s such a smart, intuitive, emotionally intelligent character.

TVLINE | Had Shaun been the one to break up with Carly, I think the audience would have been torn. Not only would it have felt out of character, but it would’ve given credence to this idea that the Shaun and Carly relationship was nothing more than an obstacle for Shaun and Lea, and that’s just not true.
Absolutely… It’s complicated, because Carly doesn’t really give him much of a choice in the situation. I think that’s why it feels so powerful that she’s the one to say, “You know what, I don’t think this is going to work.” I think that there are other things at play here, and even in the episode after, after the breakup, they’re kind of picking up the pieces… I think that they both learned a lot from this relationship, and that is the most that we can ever hope [for].

TVLINE | As an actor, what is it like to know that the end is near for this couple, then have to return to Act 1, Scene 1 and act opposite Freddie, as if you don’t know what’s coming down the pike?
I don’t have a more articulate answer than it’s really weird. This is my first time playing… the romantic lead. A lot of people have very deep opinions about who they’re ‘shipping and who they want to see together, and so I would try to keep that out of my head — the murmuring voice of the fandom — and really concentrate on me and Freddie in the room together. Because what we created, I think that we had enough chemistry that the producers were interested in seeing more between these characters, so I would keep remembering that. We just have to show up and do the work that’s on the page. You can have all your feelings about the breakup and that’s fine, you’re allowed to have them, but you can’t let it get in the way of the motivations of these characters.

TVLINE | Midway through the episode, Carly attempts to have a normal dinner with Shaun, but he’s a bit temperamental — in part because of the Case of the Week, but also, we can assume, because of what was left unsaid about his feelings toward Lea. When he finally left the dining room and shut his bedroom door, there was a very specific look on Carly’s face. What was she feeling in that moment?
I think that she [had gotten] to a place where she was, like, “You know what? I’m going to have to trust him. These are my issues. This jealousy thing…” And I can only assume that jealousy played a role in past relationships that she’s had. In that moment, I really wanted Carly to be trusting that Lea was not a part of this equation of what was feeling wrong, and maybe it was her that wasn’t intuiting what it was that he needed, or understanding where he was coming from, which is kind of heartbreaking. You can rely on jealousy to be an excuse for all sorts of behavioral things… but when you take that off the table, it leaves you so much more vulnerable. “What if it isn’t about somebody else? What if I’m just not the right person?” And in a lot of ways, both of those things are true in this storyline. 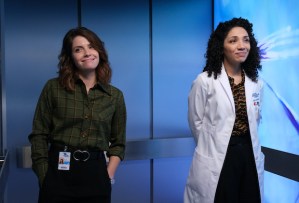 TVLINE | Later, Carly and Lea exchanged words at the hospital. Did it dawn on you that this would be the first time the audience saw these two characters in the same shared space? And what was it like for you and Paige Spara to finally act opposite one another?
It was like a beginning and an end at the exact same time, because I knew at that point [that Carly was breaking up with Shaun]. When we filmed this episode, we actually filmed the karaoke scene the day before, and so that was the first scene that I ever filmed with Paige, and it’s the penultimate part of this whole storyline. We had been in this karaoke bar for, you know, 10 hours the day before, laughing and having a good time, and so we had to go backwards, [which] was just really bizarre… But I’m glad that they put that [elevator scene] in the script, because it sort of feels like an answer to the fandom that has been so divided about who they want to see Shaun with. It’s like, look, if these fictional characters can hang out in the elevator together, knowing that they have a common interest in supporting Shaun and wanting him to be happy, then the least that the fandom can do is react in the same way. 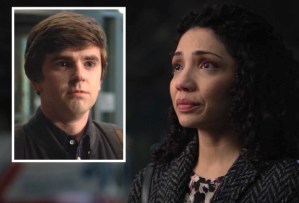 TVLINE | What was it like when it finally came time to shoot the breakup? What was the atmosphere on set that night?
The place that we filmed it [outside the University of British Columbia, which serves as the exterior for St. Bonaventure] has been the place where we filmed a couple of other scenes, like the one where Carly says to Shaun [that she doesn’t want him to live with Lea, and he says “I love you” for the first time], so that area just has this emotional energy to me. It called up the journey that they had been on. Every other scene that we filmed out there it hadn’t been raining, but it just so happened to be raining [that night]… The whole mood was just so perfect, environmentally, and it matches what it is that we were doing.

TVLINE | Did you and Freddie talk through the scene?
I don’t know if it was that night or a different night that Freddie came up to me, but he said, “I’m going to miss this.” It was the simplest thing that he could possibly say, but it meant a lot… I felt like I wasn’t alone in feeling how special that this relationship was for us, and how lucky we were that we got to portray it together.

What did you think of The Good Doctor Season 3, Episode 15? Are you sad to see Shaun and Carly’s relationship come to an end? Drop your thoughts in a comment below.