Fact Number 1: The Masked Singer‘s first two seasons featured one legendary vocalist apiece — Gladys Knight as Season 1’s Bee, and Patti LaBelle as Season 2’s Flower. Fact Number 2: Season 3 already has unmasked Miss Monster, who was revealed to be R&B diva Chaka Khan. So when Wahlberg noted Wednesday that it wouldn’t make sense for the Fox reality show to give us an additional take-you-to-church vocalist this season, she’s right.

But then it did just that. This week’s episode unmasked Mouse, showing us that she was one of America’s best-known voices of the last century. But before we get to who was sporting those furry ears, a quick recap of the performances:

BANANA | The judges were very into Banana’s rendition of Billy Ray Cyrus’ “Achy Breaky Heart,” even though he missed his intro, forgot some of the words (which he later admitted) and sounded like he was wheezing his way through the verses. “That was amazing!” Wahlberg yelled during the feedback section of his set. Reader, it was not. Clues from his set-up package included a digital clock featuring the numbers 2, 13, 6, 8, 9 and 15; cowboy boots; a silver bunny and the phrase “Git ‘er done.” (My guess: Comedian Bill Engvall.) 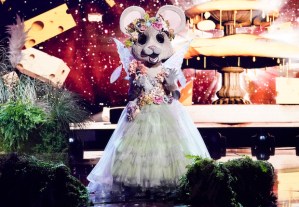 MOUSE | Judge Robin Thicke noted the predominance of gold in Mouse’s clue video this week, using it as evidence that the competitor was Grammy winner and former Solid Gold host Dionne Warwick. She sang “This Will Be (an Everlasting Love” by Natalie Cole, whom Mouse called “a good friend of mine.” And yes, here’s where Wahlberg raised her point about how the show wouldn’t have Khan and Warwick on in the same season, but I’m thinking she’s wrong. (My guess: Warwick.)

FROG | I’m not sure what the show’s Musical Powers That Be were going for with the very weird arrangement of 50 Cent’s “In Da Club” they gave the big amphibian this week, but he made the most of it. Was it fine? Sure. Did it put the rap game in the chokehold, as the lyrics boost? Nah — the words seemed to get away from him a couple of times. Still, his dancing was good, and the crowd responded well. Also: If he is who I think he is, that CSI clue in the video was a bit on the nose, wasn’t it? (My guess: rapper and CSI: Cyber cast member Shad “Bow Wow” Moss.)

TACO | “You may think of me as a buttoned-up, mild type,” Taco told us in his pre-performance montage, adding that he was a hothead before he met the woman in his life, who helped him chill out. His singing of Elvis Presley’s “Bossa Nova Baby” was quite good but very different from last week’s ode to Sintra, leaving the judges stumped. (My guess: Dancing With the Stars host Tom Bergeron.) 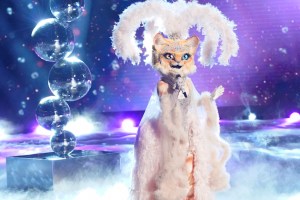 KITTY | I hadn’t heard Brett Young’s “Mercy” before Kitty sang the ballad in this week’s episode, but it quickly became one of my favorite performances of the season so far. Her voice was strong but tender, and she didn’t feel the need to over-embroider the simple melody with glory notes and such. Speaking of embroidery: Her clue video talked about sewing a “modern dress for a family member’s ball” and praised “transformation.” (My guess: Victorious star Victoria Justice.)

THE UNMASKING | When Mouse was unmasked, she was revealed to be Warwick. (Read what the Grammy-winning vocalist had to say about her time on the show here.)

Your turn! What did you think of this week’s episode? Log your thoughts, guesses, comments and reactions below!