What makes Kid Flash‘s return so fresh? Will a Supernatural fave put in a final encore? What lies ahead for Walking Dead‘s Daryl and Carol? What’s brewing on Charmed? Read on for answers to those questions plus teases from other shows!

Anything on what to expect from Wally’s return to The Flash? –Mariam
Showrunner Eric Wallace already teased it as part of our Season 6B preview, but I of course saved some additional vittles for a rainy day and or this column. “It’s going to be quite exciting,” he said of former cast member Keiynan Lonsdale’s return, in this season’s 14th episode, “Death of the Speed Force” (now airing March 10). “When I first talked to Keiynan about it, he was very excited about what he called this ‘fresh take’ on Wally. And once on-set, he was loving ‘the New Wally West’ — and that’s not an exaggeration at all. It’s the same character that we know and love, but he has grown, deepened and changed. And he might even have some new abilities.”

Any news on The Walking Dead‘s Daryl and Carol? I’m still holding out hope for them to be together! –Lauren
Well, they are at least technically together in Sunday’s midseason premiere (AMC, 9/8c) — since you’ll recall that Carol accidentally led Daryl and a bunch of their friends right into Alpha’s trap in the fall finale. But the two of them still can’t seem to get on the same page, which leads to a big confrontation, an even bigger admission, and ultimately a turn of events that seems likely to change the course their relationship forevermore. 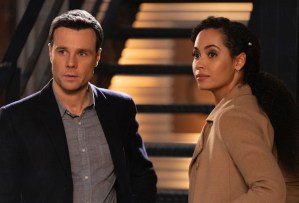 On Charmed, will Macy get her demon powers back? Will Mel finally get a steady girlfriend? Will Harry and Macy admit to each other how they feel? –Sarah
That is a lot of questions! Luckily, co-showrunners Liz Kruger and Craig Shapiro were in the mood to email me some answers. In order, now:
♦ “FYI, she hasn’t stripped her demon essence, just her powers — and that was in order to make room for something new, hopefully.”
♦ “We hope so. But it’s not easy bein’ a Charmed One.”
♦ “About what? :)”

In the Supernatural episode “Last Call,” Sergei mentioned the key to Death’s library was in the bunker. Is the show going to revisit Dean’s death books? Did they change again after Michael was killed? –Adder
With nine episodes left in the farewell run, “I think, certainly, Billie’s library and Billie’s books will play an important part of the season going forward,” showrunner Andrew Dabb teased when we delivered your Q to him. Bonus Scoop!: Dabb confirms that while we will see more of Jake Abel in his dual role as Adam and Michael, “it won’t be for a while.” (And no, he wasn’t referring to the Monday-bound show’s current six-week hiatus.)

What are the odds that we will see Mark Sheppard return to Supernatural as Crowley, to weigh in on his mother being Hell’s new queen? –Dina
“Well, Crowley is kind of technically trapped in The Empty right now,” EP Dabb reminds. “As we know, The Empty is a character for us, someone with an agenda. So I would say there’d have to be a really good reason for The Empty to let Crowley wake up — and I don’t know that reason has been presented quite yet.” 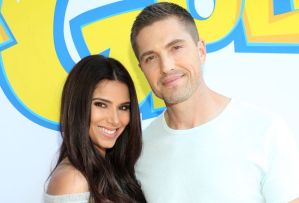 Anything on The Rookie? –Linda M.
Fresh from helping lord over ABC’s Grand Hotel, Roselyn Sanchez is set to guest-star in a springtime episode as “a reporter who butts heads with Tim Bradford (played by Eric Winter),” showrunner Alexi Hawley told me. Which of course is funny, given who her real-life hubby is (see photo).

Comedy Central’s The Other Two was one of the best shows in 2019. Any scoop on when Season 2 will be released? –Gina
A return date has yet to be locked in, but I’m hearing that a mid- to late summer premiere can be expected.

Will Legends of Tomorrow’s Zari 2.0 ever get Zari 1.0’s memories? Arrow gave Mia Smoak back hers from another reality, even though it was forced upon her. Can Legends do that with Zari, minus the forcing part? –Stephanie
Asked if Zari can get her original persona back — given that she’s “experiencing” parts of her past life (and just this week had “flashes” to donut-themed moments) — exec producer Keto Shimizu says, “Later on in the season, we give it a name: It’s a temporal echo. And that will play into some important moments in the season.” 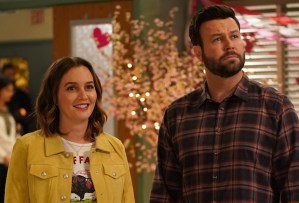 Single Parents‘ Will and Angie: Any teases about where that relationship is going? —Stephanie
It is going somewhere, all right! As EP JJ Philbin tells the Inside Line, “When Graham and Sophie leave for the summer, Will and Angie have a night alone together and uh…things are weird.”

Any news on if Free Rein was cancelled by Netflix? Haven’t heard any news on Season 4 since Season 3 dropped in July. –Drew
I asked around and there is no news. Which is… no news?

Anything on The Bold Type? —Anita
Next Thursday’s episode will introduce Richard’s mom (played by Gossip Girl’s Caroline Lagerfelt), and the dynamic between Sutton and her future mother-in-law is “really interesting, because they just come from such different backgrounds,” star Meghann Fahy says. “Richard grew up wealthy and in New York, and Sutton didn’t and kind of came from sort of a broken home, where she was the adult more than she was the kid.” Naturally, those differences might, at first, present “a challenge between those two women,” Fahy previews. “But I think it’s actually really cool that we get to kind of see them work through all of that stuff in a way that feels really, hopefully, authentic and sort of empowering for both parties.” 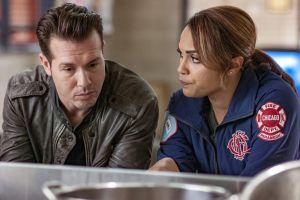 When will we get an update on Chicago P.D.‘s Antonio? Earlier in the season, we were told we would be getting updates on him. –Sue
It would appear we’ve gotten the last of said updates. “We kind of wrapped that up last fall.  He left Chicago, and there’s no plan in the foreseeable future that’ll mention him,” says showrunner Rick Eid. “But if you’d asked us this same question about Sean Roman a couple years ago, we would have said the same thing. And now he’s the subject of our Fire/P.D. crossover which airs on Feb. 26.”

Real questions from real people get real answers! If you want the Inside Line on a favorite show, email InsideLine@tvline.com! Remember, questions left in Comments will not be read and may count against your final score. (With additional reporting by Vlada Gelman)