Warning: The following contains spoilers for Sunday’s midseason finale of The Walking Dead.

Given that we all know that Christian Serratos is starring in Netflix’s Selena: The Series, I suspect I wasn’t alone in thinking that The Walking Dead’s Rosita wouldn’t survive Sunday’s midseason finale. But not only did Coco’s mom make it through the episode with a pulse, she lived to see her babydaddy’s murder avenged. How’d it — and Dante — go down? Read on… 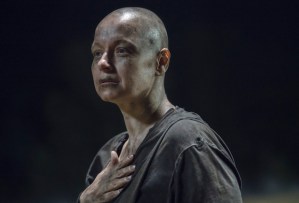 ‘PUSH QUIETLY AGAINST THEIR WEAKNESSES UNTIL THEY CRUMBLE’ | After “The World Before” opened with a flashback in which Alpha chose Dante to be her eyes and ears in Alexandria (since apparently Lydia didn’t know and therefore wouldn’t recognize him), we returned to the present, at which point Rosita showed up at Siddiq’s door with Coco in tow. Though Dante readily lied that she’d just missed her babydaddy, his reanimating corpse clued her in to the fact that something was just about as amiss as amiss could be. But miraculously, she managed to not only put down her daughter but get hold of Dante’s knife, stab and beat the crap out of him, and dispatch Zombie Siddiq, all while looking totally badass. Clearly, she was feeling much better.

The following day, Gamma — whose real name turned out to be Mary — shared with Aaron that the baby that had been rescued at Hilltop was her nephew. In hopes of being allowed to eventually see him, she disclosed the location of Alpha’s horde. Meanwhile, back in Alexandria, Daryl, Carol, Gabriel and Rosita questioned Dante, whose responses were exactly what you’d expect from a Whisperer: Places like Alexandria were “a cruel promise… no one is actually kind… walker skins don’t smell that bad.” OK, he didn’t actually say that last one. Still, you get the gist. When Aaron joined the gang, he, Daryl and Carol arranged to meet up with some main-ish characters from Hilltop and go after the horde and Lydia, in that order. 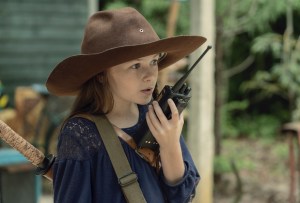 ‘WE’RE NOT AS STRONG AS WE THINK WE ARE’ | En route to Oceanside, Michonne, Judith, Luke, Scott, Marco and Dianne came across a single pair of tracks. (Lydia’s?) Despite the fact that they were preparing for war with the Whisperers and surrounded by danger at every turn, Luke suggested that they stop at a nearby library so that Judith could pick up some books to inspire her writing of records of their adventures. Presumably just so that Luke could get saved by new character Virgil (Kevin Carroll), who vanished as quickly as he appeared among the shelves, Michonne said OK. While there, she got the call that Siddiq had been murdered, which reminded her that maybe they should be more focused on getting where they’re going than picking up new reading material. So off they hustled to Oceanside.

Back in Alexandria, Ezekiel and Carol crossed paths after Siddiq’s funeral. “Too many things are changing,” he sighed. Yet he didn’t take advantage of the perfect opening that his former wife gave him to add to that statement, “Like, for instance, I’m dying.” Reeling from the loss of Coco’s father, Rosita went beyond the community’s walls to dispatch some walkers and found herself in need of an assist from Eugene when PTSD caused her to freeze. (In fairness, that zombie was wearing a helmet, which made him extra hard to kill.) Later, she confided in Gabriel that becoming a mom had made her fearful — if she died, she noted, Coco would be orphaned. Unfortunately, her boyfriend was so focused on the Dante issue that he was about as understanding as a potted plant. 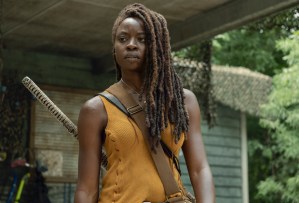 ‘YOUR DAUGHTER’S A LITTLE DEMON WITH A SWORD’ | In Oceanside, after Virgil was caught trying to steal a boat to get back to his family, Luke ID’d him as the stranger who’d kept him from being bitten by book-loving walkers at the library. Just then, the undead breached the fence, and all hell briefly broke loose. In the chaos, the suspected Whisperer made a break for it but was stopped by Judith, who appears to be fiercer than some characters four times her size and age. That night, the prisoner revealed to Michonne that he and his family lived on an island naval base; he’d left to get supplies and only wanted to return. Suspicious, Michonne asked why he’d intervened at the library. Luke “needed help. Even with what might happen to me here,” Virgil said, “I’m glad I did it. Mercy’s in short supply these days.”

The remark reminded Michonne of Rick — “My mercy prevails over my wrath” and all that. And by that point, she clearly believed Virgil. But his attempt to steal a boat had done some damage to Oceanside. Maybe, he suggested, he could repay his debt by helping fight their enemies? In the end, she agreed to sail him home, then return alone with weapons from the naval base that could destroy the horde. Judith understood both how torn her mom was — she didn’t want to leave — and also why she had to go. “We can’t lose anyone else,” acknowledged Lil’ Ass-kicker. Back in Alexandria, Gabriel visited Dante in the pokey and wondered aloud about second chances. The preacher hadn’t always been brave, he recalled. But he’d gotten a second chance, anyway. And with that, he used his do-over to brutally murder the Whisperer who’d killed Coco’s dad.

‘YOU CAN CHECK IN EVERY DAY — OR EVERY HOUR’ | As Michonne and Virgil took off from Oceanside, Daryl, Carol and Aaron rendezvoused in the woods with Connie, Kelly, Magna and Jerry. (Why any of these embattled survivors would ever march into battle with a horde of walkers not covered in protective zombie guts, I still have no idea.) Sensing Carol’s bloodlust along the way, Daryl called his bestie on the fact that she wanted Alpha dead, and to hell with whatever else happened. If Carol was struggling, he grumbled, “I’m the one you tell — me.” Besides, Alpha’s “a dead woman anyway. We have a future. Don’t let her take that, too.”

After the pals shared a much-needed hug, they moved along, only to discover that — d’oh! — the horde wasn’t where Gamma had said it was. Not remotely interested in listening to Aaron go on about how sure he was that Mary hadn’t lied to him, Daryl sped on to Plan B: find Lydia. Shortly, Carol spotted Alpha in the distance and took off after her, sparking a rousing game of Follow the Leader that ended in, if I’m not mistaken, the Whisperers’ cavernous “deeper place.” In the dark, Carol, Daryl & Co. took a tumble and wound up stuck on a ledge, just below them… well, there’s the horde! Alpha had led them right into a trap! And that was our midseason finale. What did you think of it? Grade the episode in the poll below, then hit the comments with your reviews.