Of the many storylines currently being juggled by The CW’s Legacies, one of the most surprising has been Landon’s rise from emo townie to full-blown phoenix. And last week’s episode took that journey to the next level, with Landon unlocking an impressive new ability (fire wings!) and embracing his heroic potential.

“He doesn’t really know what defines a hero and what defines a sidekick, so he’s sort of throwing things at the wall and seeing what sticks,” Aria Shahghasemi told TVLine and other outlets during a recent visit to the show’s set. “He’s not the one who solves the problem… unless the problem is a math problem.” 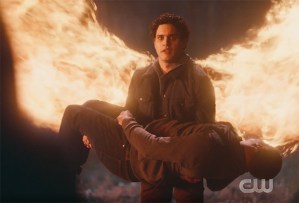 Legacies waited 13 episodes to confirm that Landon is a phoenix, then another 14 to reveal that he can fly, so Shahghasemi has had plenty of time to speculate about what really makes his first-of-its-kind character tick.

“The most surprising thing has been when [Landon’s] powers have manifested,” he said. “Among us, there was a theory running around that high stress is what causes it — but high stress seems to be a fairly common occurrence at the Salvatore School, so that doesn’t seem like the right thing. The moments that really do make his powers come to the surface are really interesting scenes, because they have so much emotional depth.”

Unfortunately, Landon’s rise to glory had also led him away from the person he once trusted more than anyone. “The last time we saw Rafael and Landon really be the brothers that they know and remember was the first episode of Legacies,” Shahghasemi noted. After that, “their whole lives changed. Everything was ‘ruined’ for them because they came to the Salvatore School and realized there are different paths they’re allowed to take.”

The good news is that the brothers’ bond is far from broken: “After everything normalizes with Landon’s [love life], it becomes more about Rafael and Landon finding the same footing that they used to be on and how they can help each other go through the things that they haven’t been helping each other with previously.”

Your thoughts on Legacies‘ latest Landon revelation? Hopes for his future? (New episodes resume March 12!) Whatever’s on your mind, drop it in a comment below.