Now this is a pretty picture. Chris Wood is returning to Supergirl for the CW drama’s upcoming 100th episode (Feb. 23, 9/8c) and TVLine has your exclusive first look at Mon-El’s long-awaited reunion with his costumed pals.

Wood, who also recently returned to the Vampire Diaries universe via Legacies, appears fully suited and fully bearded in our sneak peeks. He also looks to be in the midst of a tense and/or confusing conversation between Kara (Melissa Benoist), Winn (Jeremy Jordan), Alex (Chyler Leigh), a well-armed Kelly (Azie Tesfai) and J’onn (David Harewood).

In addition to Wood, TVLine has also confirmed that Odette Annable and Sam Witwer will appear as Samantha Arias (aka Reign) and Ben Lockwood (aka Agent Liberty), respectively. Annable was last seen in Supergirl‘s third season finale (2018), while Witwer most recently appeared in the show’s fourth season ender (2019).

As previously reported, Supergirl‘s milestone hour will also introduce Thomas Lennon (Reno 911!) as the new Mr. Mxyzptlk, previously played by Peter Gadiot back in Season 2. Per the episode’s official synopsis, “Mxyzptlk returns with a proposition for Kara: What if she could go back in time and tell Lena her secret before Lex did? Would things turn out different? Looking back over key moments throughout the series, Kara must decide if she wants to change history to become friends with Lena again.”

Are you excited to see Mon-El back in National City? And what are your hopes for Supergirl‘s 100th episode? Scroll down to see a second exclusive shot, then drop a comment with your thoughts below. 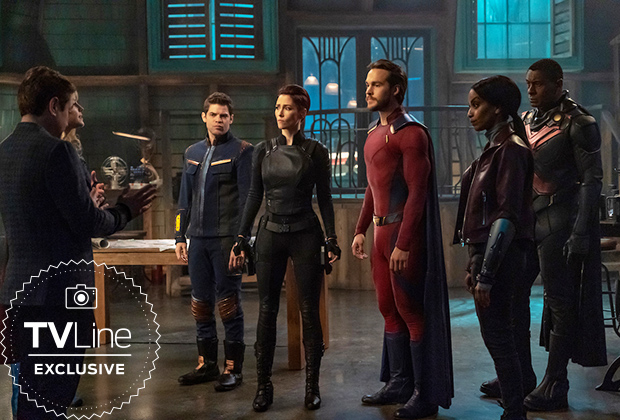