Three Masked Singer episodes in, and somebody’s gotta say it: Why have the judges been wearing the same outfits since the season premiere?

Were all of these Group A battles shot in one day? Is the wardrobe continuity just a way to provide visual cohesion before the show moves on to Group B next week? Or does Jenny McCarthy Wahlberg really, really like that bubblegum pink off-the-shoulder number?

TURTLE | The green guy is a consummate pro, which was on display throughout his performance of Shawn Mendes’ “There’s Nothing Holdin’ Me Back.” (Though we know who he definitely isn’t, thanks to Watch What Happens Live.) In his interview, he noted that he “leveled up” the choreography, and it really showed — though the vocals never took a hit. This week, the singers’ friends and loved ones (also in disguise) appeared in their clues packages to offer up tidbits about their true identities. Turtle’s 9th grade biology teacher said some generic things about 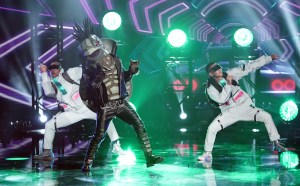 how he always loved to sing in class, but the more telling clue came from Turtle himself, via a Valentine message to judge Nicole Scherzinger: “I’ll never forget the morning we spent together. It was Turtle-y awesome.” (My guess: All My Children and Summerland star Jesse McCartney.)

MISS MONSTER | Miss Monster’s hairstylist was her friendly clue-dropper this week; he, unsurprisingly, was all about her “good hair.” More telling, perhaps, were the props in his video: white socks and a bear on a clothesline and some camouflage. But Her Pinkness’ rendition of “You Don’t Own Me” by Lesley Gore was weird at the beginning and kind of a mess all the way through. (My guess: “Through the Fire” chanteuse Chaka Khan.) 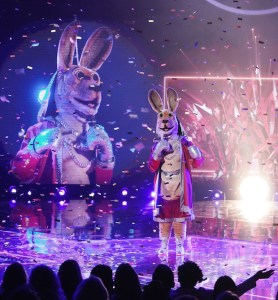 KANGAROO | I’ve been resisting going with the popular theory on Kangaroo’s identity, mainly because I had never heard of Jordyn Woods and had a hard time believing that a social media influencer best known for being a former member of the Kardashian/Jenner entourage would have such a deeply soulful singing voice. Still, I can’t ignore how all of the clues line up: Her father died a few years ago, she’s been at the center of some tabloid drama (see earlier part about the Kardashian/Jenner entertainment industrial complex) and she’s got a brother — just like the brother who appeared in ‘Roo’s clue video this week saying, “When tragedy hit our family, she was the glue that held us all together.” Her rendition of Rihanna’s “Diamonds,” by the way? Gorgeous. (My guess: Life of Kylie‘s Jordyn Woods.)

WHITE TIGER | Good Gronk almighty, White Tiger wasn’t even trying to sing Queen’s “We Will Rock You?,” was he? If I were this week’s exiting contestant, I’d be highly irked to have lost to this guy. Thank god for that backing chorus. Clues included: a quarter, foam fingers like you see at sports games and a phone with the receiver off the hook. (My guess: Former New England Patriots tight end Rob “Gronk” Gronkowski.)

THE UNMASKING | Miss Monster was chosen to go home, and when she was unmasked, she was revealed to be Khan. (Read what Khan had to say about her time on the show.)

Now it’s your turn. React to this week’s unmasking and tell us your current guesses about the rest of the singers in the comments section below!