In the end, you could say Power‘s Ghost literally created his own demise.

Sunday’s series finale revealed that Tariq St. Patrick, Ghost and Tasha’s only son, was the person to pull the trigger and shoot his father in the chest, causing him to tumble off a nightclub balcony and later die.

If you only swung by to find out #WhoShotGhost, there you go. But if you want a bit more detail, especially in light of the news about the recently greenlit spinoffs, read on for the highlights of “Exactly How We Planned.” (And make sure to check out what showrunner Courtney Kemp had to say about the end of James St. Patrick’s story… and the beginning of a bunch of others.)

A preliminary note: Much of this episode, perhaps more so than the four that preceded it, concerns scenes we’ve already seen unfold. So we’re going to shorthand a lot, cool? Tasha is at Q’s place right after she told Blanca where to find Terry Silver’s body, and she wants some lovin’. She shuts down his questions with smooches and such, and pretty soon, they’re getting busy in his bedroom.

Before she leaves — following a text from Tariq wondering where she is — Tasha notices that Q has a gun in his bedside table. File that info away for later (because you know she did). Back at her apartment, when Tariq busts his mother for her walk of shame, she lets him know how she threw his father to the law enforcement wolves and that they can relax, because “He’s going to jail, for good this time.” ‘Riq says she’s a snitch, but she rejects that label. “Sometimes you’ve gotta turn somebody in to get them out your way,” she says. “Your father taught me that.” 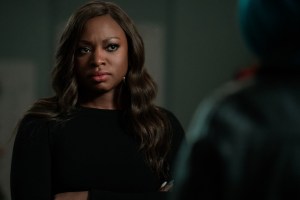 Except, as we know, Tasha’s plan to put her estranged husband back in an orange jumpsuit doesn’t go very well. The next morning, both she and Tariq watch the news story about James’ inherent political announcement. As the rest of the events of the day play out, here are some key points we learn from this episode:

* Tariq asks Tommy not to hurt Lisa Marie in his attempts to retrieve the incriminating recording. “I’m going to do what needs to get done,” his uncle replies (but we know he eventually abided by Tariq’s wishes).

* Dre provides a “clean” gun in exchange for Tariq taking him to see Ghost at Truth.

* During their run-in in the cemetery, Ghost releases Tasha from their marriage with this scathing remark: “Go ahead. Be Tasha Green, the half-smart chickenhead who’d still be in the hood if it wasn’t for me.” Ouch.

* Camps cops catch Tariq’s teacher/drug-dealing employee Radnor with the product ‘Riq gave him. But Tariq gets away scot-free.

* Ghost and Tariq argue about the kid turning himself in for killing Ray Ray. During their explosive conversation, Tariq asks his father to tell him about Breeze, aka the drug boss Ghost killed back in the day. [Side note: Anyone else hoping ‘Riq was secretly recording the conversation to be used as evidence at a later date?] Anyway, after James admits that Breeze was like family, “but he got in my way, son, so I had to get rid of him,” things get even more heated, and Ghost ends up pinning his kid and tacitly threatening to kill him.

Eventually, Tasha and Tariq realize that they’re really screwed. Ghost isn’t going to jail for Angela or Terry’s deaths. If Tasha goes against him, he’ll turn her in for killing LaKeisha. And if Tariq goes against him, he’ll turn him in for killing Ray Ray. The only solution, Tasha decides, is that she has to kill Ghost after his event at Truth. And Tariq will have to help as a lookout. So they cry and pledge to have each others’ backs as they decide: It’s time for Ghost to go.

With Q as Tasha’s oblivious wheelman, she puts her plan into action. But then Tariq has a vision of Kanan telling him, “You’re about to let a bitch do your dirty work.” Kanan points out that Ghost and Tasha will wind up shooting each other, but that James will never see it coming from his own son. “It was always gonna go this way. You know it, just gotta step into it,” he adds.

So a galvanized Tariq, armed with Dre’s gun (which he’d stashed at Truth), confronts his dad upstairs at the club. They argue about Ghost’s duplicity, his affairs, Kanan.. all the usual topics. When the teen points his gun at his dad, Ghost says he’ll never be able to go back if he kills him. “I’d do anything to go back, to go back to how it was before you left us for Angela,” Tariq answers, incredibly upset.

By this point, Tasha has realized that something’s up. So she runs upstairs — she’d been hiding in the Escalade’s backseat, ready to do the deed once Ghost got in the car — but it’s too late. Tariq points out that he’s become his father, and that Ghost is now in his way… the same was Breeze was in Ghost’s way back in the day. Ghost tells his son he loves him, then Tariq fires. James St. Patrick reaches his arms out, falls over the side of the balcony and lands in the middle of the dance floor. 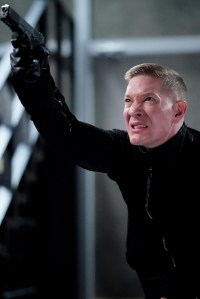 Both Tasha and Tariq are freaking out, but he has the wherewithal to task her with getting rid of Dre’s gun. When the kid looks down again at his dad’s body, Tommy sees him — we saw that part of the scene from Tommy’s viewpoint a few episodes back — but then ‘Riq gets himself together and leaves Truth… but not before he sees a drunken Saxe stumbling around the hallway.

But we’re far from the end of the story. Post-Ghost’s murder, we see:

* Warner is fired at the AUSA’s office and Saxe is rehired, thanks to John Mak.

* In his will, Ghost left nothing to Tasha. His estate is split among his three children; because Raina is dead, her share goes to Tariq. However, Tariq won’t inherit everything — and he does get everything, including the clubs — until he gets a degree from a four-year university and maintains a 3.5 grade point average or higher while doing so.

* Blanca brings Tasha and Tariq down to the station and, with Saxe, questions them about Ghost’s death. The party line — that Dre killed Ghost — is not gaining a lot of traction… until Tariq gets Saxe alone and mentions that he saw them at Truth the night of the killing. This is enough to sway Saxe into saying that Dre did it (and then to make Blanca afraid for her career by pointing out that Coleman was her witness that she let go free).

* Tasha and Simon Stern work out a deal: He’ll help get Tariq (who hasn’t even graduated from high school yet) into his alma mater college, Stansfield. In exchange, he’ll get Truth. In addition, Stern hires Tasha to help his company’s “diversity” optics.

* Upon learning of Dre’s death, Tasha uses a burner phone to call the police and tell them that Q killed Ghost. They’re having sex when the cops bust down his door and arrest him for having a firearm, which is a violation of his patrol. Then they tell him he’s accused of St. Patrick’s murder. “Tell ’em I was with you, Tasha!” he shouts as he’s carted off. She says not a word. 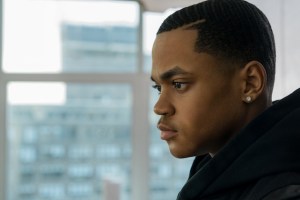 * BUT THEN, Blanca later shows up at Tasha’s apartment and arrests her for Ghost’s death. Turns out, Q thought that something shady might be going on the night of the murder, so he went into a nearby diner and bought a Red Bull so he’d have an alibi. Tariq screams that his mom didn’t do it, but the cops handcuff her and take her away. “Live your life,” she tells him on the way out.

Then we watch as Tariq starts school at Stansfield and Tasha, stripped of her wig and eyelashes, becomes a prison inmate. What a big, rich town it is, eh?

Then, in a quick post-credits scene, we saw a young Jamie, Tommy and Angela at the end of a high school day.

Now it’s your turn. Grade the series finale via the poll below, then hit the comments with all of your thoughts about the big episode!