Avengers vet Cobie Smulders is headed to an alternate Marvel Universe by way of The Simpsons — and she’s bringing some familial backup.

The Stumptown star and her real-life husband, Single Parents‘ Taran Killam, will lend their voices to the Fox ‘toon’s March 1 episode, titled “Bart the Bad Guy,” which revolves around the spiky-haired rabble-rouser getting an unauthorized sneak peek at the unreleased sequel of the extremely popular Vindicator superhero movie franchise. When two movie execs (played by, wink, wink, Marvel auteurs Joseph and Anthony Russo) discover Bart has seen the movie, they will stop at nothing to keep “Spoiler Boy” from ruining the pic’s top-secret plot for fans.

Smulders and Killam will portray two of the Vindicator superheroes, named Hydrangea and Airshot, respectively. Scroll down for an exclusive first look at the duo’s animated alter egos. 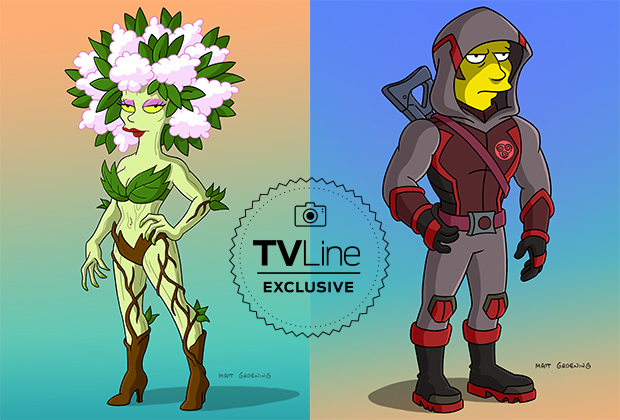 As we previously reported, the episode also features a cameo by Marvel CCO Kevin Feige as the evil alien supervillain in the film, Chinnos.