Who will help Team Flash grieve? Will Grey’s Anatomy doc be around for paternity reveal? How goes The Rookie‘s rekindled romance? What is “taboo” about a New Amsterdam storyline? Read on for answers to those questions plus teases from other shows.

Can you spoil something about The Flash post-Crisis? –Mudit
Previewing his Feb. 4 visit to The Flash (is it still a “crossover” if Arrow is gone…? Discuss!), David Ramsey says, “There’s a whole cast [of characters] over there that’s still recovering from Oliver’s death, and part of the connection to Oliver is Diggle, obviously. So Diggle’s presence there serves as kind of a conduit, a way to grieve. But there’s also a case, there’s something to solve… that Diggle’s a part of.” But if you were expecting Dig to bring up the glowing, green whatever he discovered at the close of Arrow‘s series finale, “No, that doesn’t happen,” Ramsey makes clear. “It is John Diggle over there as John Diggle, and we’re working on a case.”

I’ll take anything you’ve got on any #OneChicago shows! –E.D.
The return of Burgess’ ex, Roman (played by Brian Geraghty), during the Feb. 26 P.D./Fire crossover is sure to get a reaction out of Ruzek. “I doubt that he’s going to like it very much,” his portrayer Patrick John Flueger says. “[Roman is] trying to protect his sister, and therefore, he’s playing things in a very subversive way. He goes to the fire department, acts like he’s in touch with us — which he’s not — and he goes about things in a bit of a seedy, backhanded way, which doesn’t get us off to a very good start. I don’t know how they’re going to write it, but I would gather that there would be some tension there.” 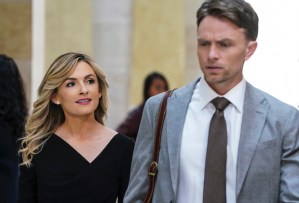 On All Rise, have we seen the last of Amy Quinn and Mark’s dad’s trial, or will we get a resolution soon? –Molly
As a matter of fact, you will see a bit more about the trial in the Feb. 3 episode of the freshman CBS drama, when Mark and Amy’s relationship heats up just as Amy tries to put together a winning defense for Vic Callan’s murder case. Things, though, will get emotionally and legally complicated when Mark is confronted with whether to support Amy’s legal maneuvering to have a key piece of evidence thrown out on a “technicality.”

Will Chicago Fire‘s Casey ever realize his dream of becoming a father? We’ve been waiting since the pilot and we’re now into Season 8…. –Sarah
According to Jesse Spencer, Casey still very much wants to be a family man. “He always wanted kids and then he got one and lost it. Then Dawson lost one,” the actor notes. “That’ll happen. I hope it does. I think he deserves it at this point. Someone, just give him a baby!” Then, after a laugh, Spencer busted out a wild idea: “Maybe Brett will get pregnant. Shocker! But then she couldn’t work so how’s that going to work?” 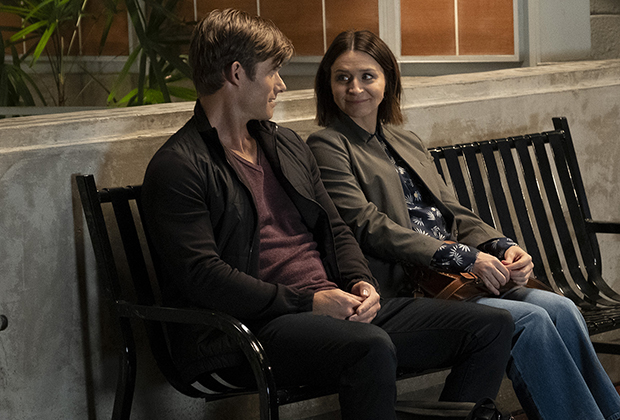 Do you have Grey’s Anatomy scoop on when Amelia’s baby daddy will be revealed? After she gets paternity results, or they will wait until the baby is born? —Ariana
However it plays out, rest assured that Amelia will be around for the big moment, even though Caterina Scorsone in real life recently gave birth to her third child. “She didn’t want a long maternity leave,” showrunner Krista Vernoff tells TVLine. “I think she’s out for only one episode — and, because we have a big cast, we don’t have to explain it.”

Got a Supernatural two-parter for you! I’m really digging the “new” Amara. When can we expect to see her again, and will Dean be contacting her about the Chuck situation? –Gigi
Dean will be reaching out to her, showrunner Andrew Dabb tells TVLine affirms, “and we can expect to see her in a few months.”

Do you have any scoop on Supernatural‘s Sam and Eileen? I love them! –Elena
“I think the Sam/Eileen relationship will evolve, but this isn’t a case where Eileen’s going to end up in the back of the Impala, riding around with the guys,” showrunner Andrew Dabb says. “She’s an independent person, Sam’s an independent person…. So I think you’re going to see them reach kind of a status quo that makes both of them happy, but maybe not get a rom-com ending, if that makes sense.”

Can you give us some intel on where we find The Rookie’s John Nolan and Grace Sawyer when the show returns on Feb. 23? –Laura
Nathan Fillion — noting that costar Ali Larter brings “such a kindness, and such a lightness” to Dr. Grace that “anybody in their right mind looking at her says, ‘Please, God, put John together with her!'” — says that a rekindled romance could be just what the doctor ordered for his titular lawman. “John has hit reset on his entire life – everything is brand-new, there is nothing from his past save for his own son, but even that relationship is changing,” Fillion reminds. “This is a [relationship] from John’s past that belongs to him, something of his that didn’t work out, but not for a lack of love. So it will be nice to see where things go with Dr. Grace, this love from his past.” 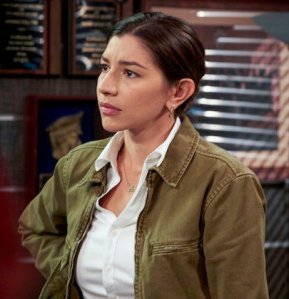 Hello! Any news about SVU will be welcome. –Sú
Prepare to learn a lot more about squad newbie Kat in the Feb. 6 episode, which will capitalize on Jamie Gray Hyder’s real-life love of (and proficiency in) boxing and martial arts. “The producers got wind that I like to fight and that I train, and were like, ‘All right, we’re putting it in an episode,'” Hyder says. “So they made Kat a fighter, as well.” The hour also will be the first time that viewers see Kat’s life outside the precinct, as the detective uncovers something shady happening at her gym.

Any super-early intel on Succession Season 3? –Craig
HBO president Casey Bloys confirms that the acclaimed dysfunctional dramedy will return this year, telling TVLine Season 3 will for sure premiere “sometime in 2020.”

Anything on any New Amsterdam characters other than Max and Helen? –Dawn
As Iggy struggles with his issues, he’s going to find an unexpected source of support: Bloom. “Last season, Iggy was there for her when she fell apart,” his portrayer Tyler Labine notes. “Apparently, we’re going to try to do kind of the same thing this season, where Bloom is there for Iggy and helps him kind of get himself back together.” Meanwhile, an upcoming episode will explore the disturbing side of DNA testing services like 23andMe. “More and more people are finding out that maybe they’re related to people that they didn’t realize they were related to,” Labine says. “So we have an episode about that [which is] really weird and funny… and kind of taboo and off… only the way our show can do it.”

Am I possibly the first person to write in about the new Party of Five…? Anything to share? –Dani
You are! And si! If you think that Vanessa, the hostess/grad student whom Emilio was dating, is the Freeform reboot’s answer to the original series’ Kirsten (played by Paula Devicq), “Stay tuned, because you haven’t seen the Kirsten parallel yet,” teases Amy Lippman, who co-created both shows. “There is someone else who comes in [and] begins to function similar [to the Kirsten character]. It’s a bit of a twist.”

Will Hawaii Five-0 this season finally fill us in on the “long story” Junior Reigns said was behind his decision to leave the SEALs? –Belle
“There are so many stories we want to get to … but I don’t know if that will be this season,” showrunner Peter M. Lenkov told me. “I’m hoping that this show goes a few more seasons and that is one of the things that we can address as time goes on. I think the plan is to do it. It’s just when. It’s just when.” 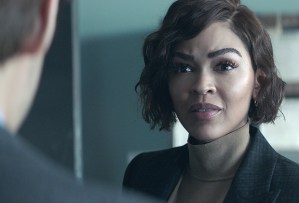 Will we find out the cause of the tension between Prodigal Son‘s Malcolm Bright and Colette Swanson? –Theolin
“We’ll definitely speak to that issue of what happened in the past, with him and the FBI and stuff like that, but the individual story with Colette may be something that has to wait for Season 2,” says showrunner Chris Fedak. “Right now, we’re on a different path with regards to that story.” Bonus Scoop: Fox entertainment president Michael Thorn recently assured us, “The Season 1 finale is going to be very twisty. All I’ll say is that the family is even more complicated than you think it is.”

I’d like to know the status of the New York Undercover and NYPD Blue reboots. Last I heard, the first was still being shopped around, and the second was due to undergo a retooling. –Shon
I asked around for you, and sources are saying that the hope still is to find a home for Universal TV’s New York Undercover, while NYPD Blue is no longer being actively developed at ABC.

Anything you can tease about Legends of Tomorrow‘s Zari and Nate? –Stephanie
In next Tuesday’s episode, Nate comes face-to-face with Zari, who’s now a Kardashian-esque media mogul/influencer with a new look and ‘tude… and, sadly, no memory of her ex. While Nate can’t help staring at her in amazement, NuZari mistakes him for one of her millions of social media followers, and her reaction confirms that Tala Ashe is the show’s secret comedy weapon.

Real questions from real people get real answers! If you want the Inside Line on a favorite show, email InsideLine@tvline.com! Remember, questions left in Comments will not be read and may count against your final score. (With additional reporting by Vlada Gelman and Kim Roots)