As he was packing up to move with his family to Metropolis (!), a meteor crashed near Dig, slamming him against the moving van with its force. After shaking off the blow, Dig combed through the debris to discover a mysterious box, which, upon being opened, emitted a bright green light. But what exactly does that Green Lantern-esque glow signify for Dig’s life post-Arrow? 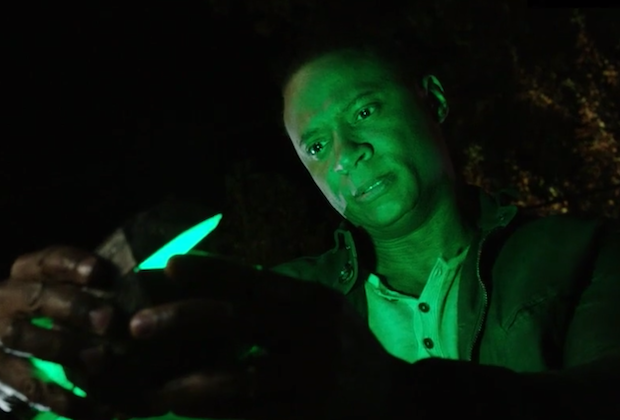 “I don’t know what that means,” his portrayer David Ramsey admitted this week at a press screening. “But he does go to Metropolis, and he got a green box. We’ll still see, believe it or not. We’ll find out.”

If it feels like Ramsey is being especially guarded about the ramifications of the reveal, that’s because the scene in question “was something that was worked out over a year ahead with DC Entertainment,” Arrowverse executive producer Marc Guggenheim explained. “We very specifically negotiated and discussed the parameters, and I feel like to say anything beyond what we have showed you would violate our agreement with DC.”

But addressing the long-held fan theory that Dig becomes a Green Lantern “was very important,” Ramsey said, adding that “this whole thing is exciting.”

“I think there’s been a bit of a payoff,” Ramsey continued. “We’ll see what all that means. But I’m with Marc — anything beyond that… is kind of violating these parameters that we’ve been given by DC that we have to honor. But I think we’ve done some justice” to the long-running tease. (Note: HBO Max has an actual Green Lantern series in development, which counts Arrowverse EP Greg Berlanti among its sires.)

The big, green twist, as well as Dig’s relocation to Metropolis aka the home of the greenlit Superman & Lois spinoff, hints at the possibility that Ramsey’s time within DC’s TV universe might not be over. “All I can tell you is that Greg [Berlanti], David and I have had a lot of conversations about David’s future in the Arrowverse going forward, both in front [of] and behind the camera,” Guggenheim told TVLine during a post mortem interview, “and there are a lot of ideas that we’re banding about that are very exciting to us… He’s on The Flash [on Tuesday, Feb. 4], and we’ve just got some cool notions for next season.”

The feeling that this Arrow journey is ending while simultaneously somehow continuing was also present during the “surreal” and tear-filled final days of filming, Ramsey shared.

“This is the longest I’ve run on a show, obviously,” he noted. “Being on a show where you have this network with The Flash, Legends, Batwoman and all this these tentacles, it’s just strange. It’s strange because it feels as if it’s over, but it’s kind of like, ‘Look at all my children,’ almost. It’s like, ‘Look at this world we created.’ So it’s over, but then again, it’s not over.”

“I’m used to, as an actor, you do a show, you’re done, you move on to the next,” Ramsey continued. And while that still holds true even in the case of Arrow, “there’s also this legacy and this thing that we’ve kind of created that feels really special.”

What did you think of the Green Lantern tease? Grade the series finale and final season below, then hit the comments with your thoughts!