The CW’s Arrow wrapped its eight-season run on Tuesday with a series finale that paid tribute to (and was partially set in) the past… mined the present for big emotions… and planted seeds for several characters’ futures.

Weeks after the events of Crisis, Oliver’s friends and family — a resurfaced Thea, Roy and Rory/Ragman included — gathered in Star City for the hero’s private funeral. But before any heads could be bowed in sad reverence, there was one final mission to take on: the corralling of John Byrne, an old name from Oliver’s “list” who was seeking revenge for his prison time by kidnapping teenage William. Luckily, Felicity returned to the bunker just in time to help out with the hunt, with adult Mia (visiting from 2040) eventually getting a bead on and bringing in the baddie.

Along the way, Felicity somewhat hesitantly met the grown-up version of the baby who had only recently started teething back home, and boy was she proud to see what her and Oliver’s daughter has/will become! Laurel, meanwhile, puzzled over why her better doppelganger wasn’t brought back by Oliver in this reborn universe, instead of some broken version, but Quentin explained that his daughter’s other needs no fixing.

The morning after a candlelight service where a  Green Arrow statue was unveiled, it was time for the rain-soaked funeral, which was attended by such familiar faces as Barry, Kara, Nyssa, Anatoly and Tommy, and at which Diggle gave a moving eulogy. Afterward, Mia portaled back to 2040, and then we revisited the Season 7-ending scene where Felicity was led by the Monitor to see “him,” after so long a wait — but you can read much more about that here.

TVLine spoke with Arrowverse EP Marc Guggenheim about some of the hard decisions and “enormous” intricacies involved in crafting the series finale.

TVLINE | You told me last summer that you came out of a morning meditation with the potential idea for a brand-new, very final scene. Did we get it?
You got it. You got it almost word for word. That was exactly the scene. It was really weird, actually, to be there for the filming of it, because it’s like, “Oh my God, this thing arrived full-blown into my head and I just jotted it down.” To watch it being performed — and performed at such a high level by Stephen [Amell] and Emily [Bett Rickards] — was really exciting.

TVLINE | What were the logistics that you were worried about, to make it happen? Getting Emily back, digging up that old set…?
Actually, we were going to redo the set already and use it for something else, so that wasn’t the problem. It was getting Emily. (Read more about that here.)

TVLINE | So besides a funeral, how did you decide what else the series finale needed to be?
Good question. It was something that kind of crept upon us. We kind of started with the known knowns, the things that we knew had to be in there. We knew it had to have a funeral. We knew that we wanted to both have Stephen present in the finale and honor our flashback conventions by flashing back to an unseen moment of Season 1. We knew that we wanted an action sequence that would leave it all on the field, that would be our finale punctuation mark on the show’s legacy of stunt work and action. And then later on in the process, we hit upon the idea that Oliver sacrificing himself for the rebirth of the universe would bring back a lot of the people he’s lost along the way. We knew had all those elements, and then it was really a question of “How do we structure those elements?” and “What’s the unifying principle that ties everything together?” The nice thing was that because we had this plan in place for so long, we were able to just spend a lot of time talking about it.

TVLINE | In watching the series finale, I got more of Emily Bett Rickards than I ever anticipated. Did you?
No, we actually got less. We got less. We write everything without regard to scheduling, and without regard to budget — our ADs and our line producer can speak to that! — because we always want the story to come first. And then we make scheduling tomorrow’s problem. So we basically wrote as much Felicity as we wanted to, with one exception. The original plan for the flashback story was that it would take place sometime around the aftermath of [Episode] 114, which is after Felicity learns of Oliver’s secret and basically joins Oliver and Diggle in the Arrow bunker, but we were only able to get Emily for two days. Something had to fall out, and that became the flashback story, unfortunately. But in terms of the present-day story, we were able to schedule everything. It wasn’t easy to schedule — we had to do what’s called a “company move” in the middle of one of the days to make it all happen — but we did it, and that’s what matters.

TVLINE | When the first photos of the funeral came out, I was like, “Huh. They sure revealed a bunch of returns.” But then I watched the thing and realized you in fact concealed many. Talk about making that happen. What were the complexities?
“Enormous” is the short answer. No. 1, it’s not easy getting all of these actors in one place at one particular time. No. 2, they’ve got to be willing to come back. No. 3, they have to have schedules that accommodate it, and I will tell you, I was so burnt out after doing the crossover that [Arrow showrunner] Beth [Schwartz] really picked up the baton and ran with it, making all of the personal phone calls to the actors, and to the agents, that really are necessary to pull off something like this.

That being said, there were still actors we wanted who we just simply couldn’t get, because they were off shooting a television show, or shooting a movie. Katrina Law, for example, was shooting Hawaii Five-0 and we barely got her. In fact, she was landing at Vancouver airport, going through customs, while we were shooting the first half of the funeral scene. 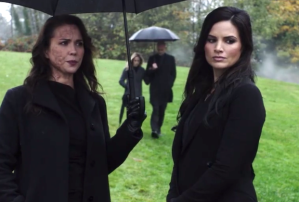 TVLINE | You know, I figured she probably had to get back on a plane right after.
Pretty much! Kudos to Katrina, as always, for being an incredible team player, but thanks, also, to the people of Hawaii Five-0. They worked with us and helped us out.

TVLINE | Because at one point I was looking at Kara, like, “Why isn’t she holding an umbrella like everyone else…?” I started to convince myself she had been spliced into a scene.
No, but I will say Melissa [Benoist], again, a total team player. She also came and went very quickly, because she was shooting on Supergirl that day. Tricky, tricky stuff.

TVLINE | Do you see bringing back Emiko (played by Shea Shimooka) as a last magnanimous gesture by Oliver?
I do. I mean, we had a lot of conversations in the writers room about who comes back and doesn’t come back, and one of the things we didn’t want to do was open the can of worms of villains coming back. But I think Emiko so redeemed herself at the end of Season 7 that she earned a return. And I personally really wanted to see the moment where she and Thea were together. 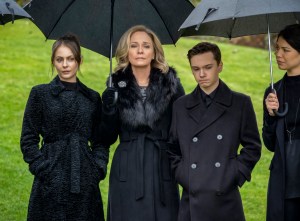 TVLINE | Yes, and Moira was a good soldier in that moment. “You’re welcome here anytime” and all.
That was actually something that was really important to Susanna [Thompson]. That line wasn’t exactly written that way, but it was important to Susanna that Moira convey a sense of familial connection with Emiko.

TVLINE | Was Robert Queen ever considered to be brought back, or were you A-OK with the narrative idea that if he never died, Oliver didn’t become Green Arrow?
We did start off with a list of every potential person who could come back, and lord knows we’ve killed a lot of people on this show. But very early on we committed to that notion.

TVLINE | Who in the writers room gets the spot bonus for remembering to address the “Mark of IV” tattoo thing? Because I totally forgot about that and would not have dinged you for forgetting.
All credit goes to the writing staff. They made up a list of all the hanging chads we had to address. 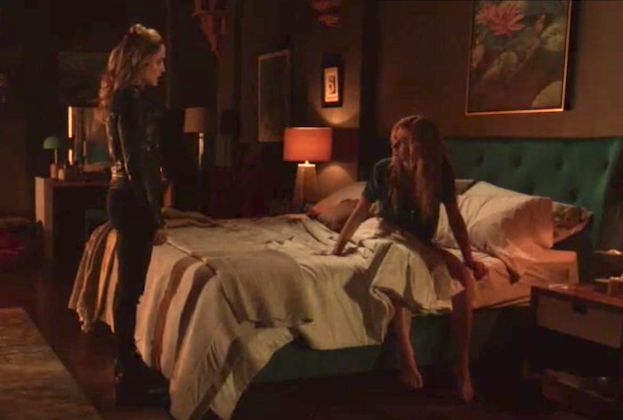 TVLINE | Just to clarify about Mia’s return to 2020…. When the Green Arrow and the Canaries spinoff pilot episode opened, Laurel and Dinah had already attended a funeral for Oliver that Mia was not at, right…?
Yes, and I’m glad you mentioned that. This episode really went over in time; even though it was a short script, we really let all the moments breathe, and there was an exchange when Sara comes to pick up Mia [in 2040]. Sara said, “I time-traveled here… to take you to your dad’s funeral,” and there was a couplet that we had to cut for time where Mia says, “But I wasn’t at my dad’s funeral,” and Sara says, “That’s what I’m here to fix. Time travel, remember?”