The line “Yeah, that’s not good” is only uttered once during the Season 3 premiere of Station 19. But really, it could’ve been repeated over and over, because a whole mess of not-good, very-bad things happened, some of which seemed to bode awfully poorly for the futures of the Grey’s Anatomy doctors involved in that series’ winter finale. Read on, and we’ll go over them one by one… 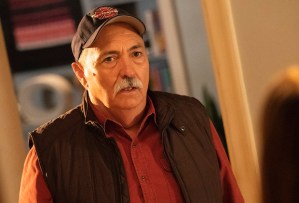 TWO WEEKS AGO | Since “I Know This Bar” took place not only in the present (picking up at the point that Grey’s turned Joe’s into a parking lot) but also the recent past (two weeks earlier), I’m going to detail the events of that not-so-ancient history first for the sake of a linear read. So… 14 days ago, the Station 19 crew threw Ben and Bailey a “You’re having a firehouse baby” party, just before which Vic introduced new beau, Jackson, to her friends. Besides being the first that Bailey knew about Jackson and Vic’s relationship, the celebration also clued in Pruitt to the attraction simmering between Andy and Sullivan when the captain volunteered to join her on a routine call. While away from the station, he apologized for hurting her but maintained that they couldn’t break the rules and be together. Yet they fell in love, which was also against the rules, she angrily noted. “And you did nothing to discourage it!”

Later, alone with Sullivan at the station, Andy suggested that “if Ripley were still here, I think he might tell you to screw the rules.” So Sullivan at last came clean about why he’d pumped the brakes: “They’re making me battalion chief, and I want you to make captain, but that’s not gonna happen if we’re together.” Sensing that he was more worried about his own promotion than hers, and to hell with their relationship, she walked away. At home, Pruitt raged at his daughter about the situation she was in — or rather, the one she’d put him in. “Your decisions reflect on me and my legacy!” he hollered. When he refused to follow Andy’s order to get out, she stormed out herself. And, of course, the whole shouting match was overheard by Maya, who’d have had to have been deaf to have missed it. 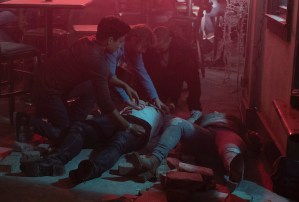 HERE AND NOW | In our current timeline, chaos reigned in the aftermath of the car crash at Joe’s. Grey’s residents Helm and Simms appeared to be in particularly bad shape, and Casey, suffering from PTSD, kept asking whether a bomb had gone off. Though Ben was able to ascertain that the car wasn’t leaking gas and therefore wasn’t a fire risk, the structural integrity of the bar had been compromised, so he had to get everyone upstairs and outside asap. Trouble was, the back door had been blocked by a cement truck. While Station 19’s firefighters raced to the scene, Vic panicking upon finding out that her “hot doctor lover” was among those in the bar, Ben and Levi treated the car’s driver, a woman named Joan who’d swerved wildly as she was racing husband Don to the hospital, lest he die of a heart attack.

While trying to figure out how they could move the cement truck the fastest, Vic sensed that Andy was judging her for worrying about Jackson when, having so recently lost Ripley, her “vagina should be a war widow,” right? So Vic explained how she’d grieved — Barrett Doss delivering a helluva monologue — and theorized that Andy was grieving something, too. (If she only knew… !) By and by, the firefighters all pulled together to push the cement truck out of the way, only for it to wind up being blocked by the arriving tow truck! D’oh! Inside, Ben had a distraught Joan perform CPR on Don and even affix EKG paddles. Miraculously, they were able to restart his heart. After Travis got him out of the car and out of the front window to safety, Joan attempted to use her crafting scissors to cut herself free of her seatbelt — just as the car lurched forward, causing her to stab herself in the carotid artery. RIP, Joan. 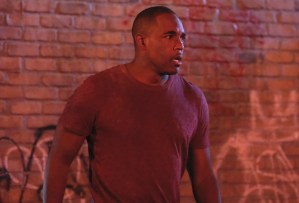 UNHAPPY ENDINGS | Nearby, a delirious Taryn babbled on about how they had to get out of there, because Ben was having a baby and all that, prompting Warren to admit to Jackson that no… no, he and Bailey weren’t expecting anymore. Just as the cement truck was finally moved from the back exit, Blake started choking and turning blue, and Bailey arrived on the scene. Upon learning that her husband was in the bar, she tried to pull rank, but in this instance, she had none. “Dr. Bailey, you are not my chief!” Dean had to remind her as he ordered her to stay back so that she didn’t cost him any time — time she’d be livid if he cost her in an O.R. Once she was eventually reunited with Ben, he tried to blame her miscarriage on the stress that his job caused her. It wasn’t that, she reassured him. Just, “life scares me to death sometimes.” Right there with ya, Miranda.

As all of Grey’s docs were taken to the hospital, as far as we knew alive if not well, Maya challenged Andy to talk to her — she apparently hadn’t, not really, since the night of her and her dad’s big blowup. So Andy, while stressing that she hadn’t slept with Sullivan, revealed that the captain had torpedoed their budding romance for the sake of possible promotions. Armed with this new intel, Maya immediately dumped Jack, who guessed that, with a new fire chief soon to be named, she was hoping that when the promotions trickled down, she might make captain. Meanwhile, blaming himself for Joan’s death, Travis told Vic that the deceased had spoken about her and her husband’s dog, Cleo. So they made a detour en route back to the station so that he could feed the pooch. (I’d love to say that I didn’t tear up as Cleo greeted Travis, but er… I can’t. Animals get me every time.) Back at the firehouse, Sullivan first called Andy out for insubordination, then ordered her to take a week off so that she could figure out how to at least pretend to respect him. Snap!

So, what did you think of “I Know This Bar”? Grade it in the poll below, then hit the comments. Did it seem, as promised by showrunner Krista Vernoff, grittier to you?