Just in time for Grey’s Anatomy to take its winter break, Meredith returned to work in Thursday’s “Let’s All Go to the Bar.” But the episode wasn’t all choruses of “For She’s a Jolly Good Doctor.” On the contrary, the action-packed fall finale also dropped a baby in Jo’s arms, sped up the swirling of Maggie’s downward spiral and gave DeLuca some stiff competition for Grey — courtesy of Cristina! Read on…

‘IT’S WEIRD SPENDING ALL YOUR TIME IN A PLACE MOST PEOPLE HATE’ | As the hour began, Mer was texting with Cristina, who wrote that she’d sent a package; being welcomed back by her Grey Sloan colleagues; and throwing shade at DeLuca. “I was gonna tell you [Bailey rehired me],” she said, “but you were too busy dumping me.” While outside Catherine, as far as I know still unaware that Jaggie is finito, got an eyeful of Jackson flirting with Vic, inside Amelia and Link, and Levi and Nico, were busy canoodling. When Amelia and Link came up for air, Jo related that she’d become a safe haven volunteer and had just gotten her first call that a baby had been dropped off at a fire station. While Maggie, still shaken after losing Sabi, treated Elliot, who was set to receive his fourth aortic valve replacement, Bailey discovered that her patient of the week was Station 19’s Captain Herrera, who feared that his cancer had returned. Meredith was about to discuss a tumor with 13-year-old patient Jamie and her mom when she was interrupted by Cormac Hayes (Richard Flood), the newly-minted chief of pediatric surgery. And, at Pac-North, when not noticing how handsy Gemma was with Richard, Owen stepped in for an absent Alex to give Dr. Daphne Lopez a walk-through in hopes of enticing her to join the staff.

At Station 19, Jo met Vic and kinda freaked her out by calling her Jackson’s girlfriend. “Did he… say something?” asked Vic. Then, as the firefighters got called away, Jo was handed the baby in need by Ben. At Grey Sloan, Maggie asked Teddy to scrub in on her valve replacement and grew increasingly anxious about the possibility of losing Elliot, who’d just — and I mean just — become a dad. (His significant other was still icing her lady parts, that’s how new the newborn was.) Meanwhile, Miranda discovered that Chief Herrera had a tumor, which she refused to let him assume was malignant. Off Catherine’s awkward meeting with Vic, Jackson explained that he and Maggie had broken up months ago, but his mom didn’t have to worry about it affecting her marriage. She, in turn, said that she didn’t know how much longer her marriage would be an issue — she was duly suspicious of his relationship with Gemma. Oh, come on, said Jackson. Richard would lie down in traffic for his wife! “I might ask him to,” she snarked. 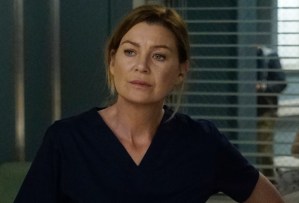 ‘PREGNANCY CLUB JUST GOT LESS FUN’ | During a coffee break/impromptu AA meeting with Gemma at Pac-North, Richard learned that she’d started to drink when she became a young widow. At Station 19, Jo was struck by the surreal situation in which she found herself, caring for a baby who, like her, had been abandoned as a newborn. “We prefer the term ‘surrendered,'” Ben told her, because the parent(s) didn’t feel they could care for the child. (Anyone not expecting Jo to want to adopt this baby?) When Helm and Schmitt argued about his ratting out Mer as they wheeled Elliot to the O.R., he asked them 1) to lay off and b) to take him past the nursery so he could get what might be his last peek at his baby. (Damn, this episode jumped around a lot!) While comparing notes on her pregnancy with Amelia, Bailey was shocked to learn that her colleague hadn’t had an ultrasound yet. “Best way to fight fear is with information,” Miranda told her. “You can’t fix what you don’t know.” Treating Jamie, Mer clashed big time with Cormac. “Who are you, exactly?” he asked, six feet of bad attitude in a lab coat. Later, before bringing the “surrendered” baby to Grey Sloan, Jo told Ben that she’d hoped being a safe haven volunteer would help her better understand her mother; it had not. “Link thinks this is too much, too soon,” she admitted. And it appeared that he might have been right. In the O.R., Maggie got seriously snippy with a chatty Teddy. As soon as Altman was called away, Pierce realized that — uh-oh — Elliot’s heart wasn’t restarting. Thankfully, Teddy returned in time to suggest that if they waited a while, it still could.

Hilariously, when Catherine arrived at Pac-North, she had to tell a nurse who she was — and was informed that Richard was having coffee with “his wife.” After Cormac scared Jamie and her mom to death with talk of the possibility that her tumor was cancer, Meredith all but face-palmed. Meanwhile, Link almost laughed at DeLuca for telling Mer to “take some time” because they weren’t equals — duh, of course they weren’t — and strongly advised him to go undo whatever he’d done, stat. When Bailey was informing Chief Herrera that he had lymphoma, she began bleeding. By the time Ben got there, sadly, she had lost the baby. When it turned out that Jamie didn’t have cancer, Mer informed Cormac that he was in her house and told him that she was going to remove the mass — which turned out to be a gall stone?!? — right then and there. At Pac North, Richard warned Owen against getting too chummy with the lovely Daphne; Webber knew firsthand what a slippery slope that was. Meeting Jackson for lunch, Catherine announced that Richard was having an affair — just because he had been in his office with Gemma with the door closed. Back at Grey Sloan, Bailey begged Ben to go home, go drink with his buddies, anything but stick around “with those sad, beautiful eyes.” Immediately after, she learned that Amelia was getting her ultrasound imminently, and rather than scare her, said that she had elected to find out the gender of the baby: It’s a girl, Miranda said. Or it had been. 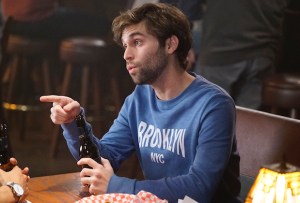 IN CLOSING | As the episode drew to a conclusion, Teddy explained to Elliot’s babymama that they weren’t sure how long it would take his heart to restart. In response, the poor woman asked a distraught Maggie what had happened. More like demanded to know — and Pierce couldn’t take it. “I would like to tender my resignation,” she told Koracick afterwards. “I had a bad feeling. I can’t be a surgeon if I can’t trust my own gut.” When he immediately offered Teddy Maggie’s position as cardio chief, she launched into a speech about how he had to stop offering her things in hopes of obtaining a future with her. That wasn’t what he was doing, he said. But he would marry her in a heartbeat — whereas Owen had yet to propose, he noted. Cormac at last showed a sweeter side, telling Jamie not to worry about the boy she liked — his sons and all boys her age were basically scared of girls. Catherine texted Richard that she was leaving for Chicago on foundation business. When Link showed up at Jo and Alex’s, the baby was there. It appeared that she was keeping him, or hoping to. Finally, Cristina texted Mer that the package she’d sent wasn’t an it, it was a him — she’d basically sent Cormac, aka McWidow. At Amelia’s ultrasound, Carina revealed that the mom-to-be wasn’t 20 weeks pregnant, she was 24 — meaning that the baby was… aw, crap! Owen’s?!? And a car crashed into Joe’s Bar while Jackson, Ben, Chief Herrera, Levi, Nico, Helm, Casey and Blake were all there, setting the stage for [see below].

So, what did you think of Grey’s fall finale? Grade it in the poll below, then weigh in with your reaction to the Grey’s/Station 19 crossover promo above.