Throw two attractive people in the life-and-death situation of an exorcism, and sparks — and quite possibly some projectile vomit — are going to fly.

So it’s little surprise that Evil co-workers David and Kristen have been inching ever closer since the CBS series’ premiere, despite the fact that he’s a priest-in-training and she’s a married mom of four. While nothing actually untoward has happened between the holy-father-to-be and the psychologist, Katja Herbers’ Kristen had a hot-and-heavy dream featuring Mike Colter‘s David back in Episode 6. And let’s not forget that spiked-sangria slow dance they shared while investigating David’s father’s art commune in Episode 8.

Just because David hasn’t been having visions of getting to know his partner in the biblical sense doesn’t mean he’s immune to her pull, Colter tells TVLine. 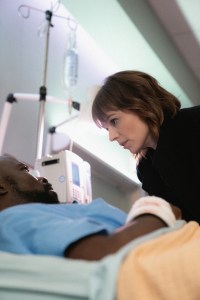 “He actively chooses not to think about it. But in actively choosing not to think about it, he’s thinking about it,” the actor says with a laugh. “It’s a tricky thing. It’s his conscious trying to suppress the subconscious, but it takes work. You’re already expending energy, so there’s no way to get around it, you know what I mean? Especially for a guy who is practicing celibacy.”

It remains to be seen how much energy David will have to put toward all aspects of his work when Evil returns on Jan. 9, given that he was stabbed and left for dead in the fall finale. But we think it’s probably a good idea to say a few extra prayers for his willpower — particularly, as Colter points out, because David seems to be on a mission to sabotage himself.

Kristen is “the only female in his circle, and he put her there,” the actor explains. “He had options to hire someone to work with. Sure, she’s really intelligent… but there’s also chemistry. He chose to do this.”

Colter adds that the Kristen/David attraction sometimes stymies the show’s on-set technical advisor, who weighs in on all things regarding Catholicism.

“I have to remind him this is television,” he says, chuckling. “Therefore, there are choices that David makes that maybe a priest shouldn’t make. But it makes for great drama!”