The aftermath of Shaun and Lea’s physical embrace will be explored in The Good Doctor‘s winter premiere — and TVLine has your exclusive first look.

The medical drama’s Jan. 13 episode (ABC, 10/9c) picks up after Shaun’s trip to Wyoming, during which he achieved a level of intimacy with his roommate that he has yet to achieve with his girlfriend Carly. That realization is not entirely lost on him, but he “struggles to process the full implications” of what it means for his relationship moving forward, according to the official logline. “He will ultimately do what it takes to make it up to Carly” — but will it be enough?

The photos seen here suggest that Shaun has his work cut out for him. Upon his return to California, Carly “will struggle” with not being asked to accompany her boyfriend when he went to confront his parents — especially in the wake of Shaun and Carly’s own intimacy issues. “She will question him about why that choice was made,” and she will “deal with her own emotions about that choice,” executive producer David Shore previously told TVLine.

Do you think Shaun and Carly’s relationship can survive what happened in Wyoming? Take a gander above and below, then hit the comments with your thoughts. 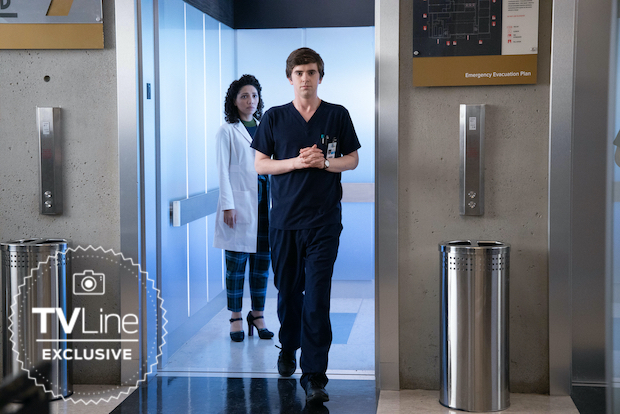