The Good Doctor took two steps forward and one giant step back in the penultimate episode of 2019, as Shaun attempted to conquer his lingering fear of intimacy.

At the start of “Incomplete,” Shaun marched right into the pathology lab with flowers for Carly and told her that he was ready to have sex. Later, he admitted that the thing that scares him the most is the possibility that he’ll wind up alone if he is unable to combat his anxiety. Carly took Shaun’s hand and told him that they didn’t have to have sex, but even holding on to each other proved too much for Shaun. He got up and left Carly’s bedroom without saying a word.

Meanwhile, Claire’s downward spiral finally caught up to her at work, when her one-night stand-turned-patient (played by ER vet Sharif Atkins) told his wife (!) that he cheated on her with Dr. Browne. In response, the betrayed spouse approached the third-year resident and slapped her across the face — a brutal blow that was witnessed by both Park and Melendez.

Elsewhere in the episode, Morgan got personal with a patient’s fiancé and revealed that she was unfaithful in a previous relationship, and Lim admitted to Melendez that she’s taking their breakup harder than she expected. Then, in the closing scene, Shaun found out that his estranged father is dying of pancreatic cancer, paving the way for a monumental family reunion in the Dec. 2 fall finale (for more on that, click here).

Below, series boss David Shore weighs in on Shaun and Carly’s relationship, Claire’s “rock bottom” and what the rest of the season holds for Morgan and “Limlendez.” 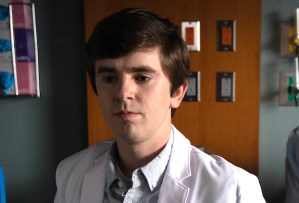 TVLINE | When Shaun confesses to Carly that his greatest fear is that he’ll wind up alone, I can’t help but feel like there’s something he’s still not telling her, whether he’s cognizant of it or not. Is there something else holding him back?
One of the things that challenges him, more than it challenges most of us, is understanding our own feelings… He was completely honest, and I think it was a wonderful moment, but it doesn’t mean that you can get over the things that are difficult. Just because you have an understanding of them doesn’t mean that it’s easy.

TVLINE | How is Carly feeling after Shaun leaves her at the end?
I think she’s probably a little angry. She knows that he’s not trying to hurt her, but it’s frustrating because she’s trying to love somebody, but it’s not going the way that she wants it to. She’s trying to be understanding, but as we’ve seen at different moments throughout their relationship, Shaun does challenge her… He’s doing his best, but even when we try to do our best, we make mistakes.

TVLINE | What does the slap signify for Claire?
This is definitely a wake-up call for her. The slap signifies what she has gone through, and recognizing the ramifications of her actions. From her point of view, this is rock bottom, and she hopes that she is able to turn things around now. She has certainly made a decision that she wants to. How effective she is at that, we’ll see in the next few episodes. 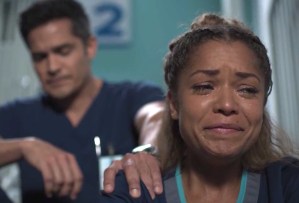 TVLINE | That breakdown in the staircase feels like the culmination of everything that Claire has been through leading up to the slap. Those were the tears she didn’t shed when Breeze died.
I think that is one hundred percent right. This is her whole life coming back to her — all the things that have gone wrong, and all of the challenges [that she has faced]. She is crying about her mother, and how she was never able to make her happy.

TVLINE | We didn’t follow up on Morgan’s arthritis diagnosis this week, but we did learn about a former relationship that ended due to her infidelity. Are we going to delve into her love life at all in the back half of Season 3?
We’re going to explore the arthritis moving forward and the impact it has on her, and her attempts to control it and treat it. But no, we’re not introducing a boyfriend or anything like that.

TVLINE | Lim tells Melendez that she has had second thoughts about breaking up with him. Should fans hold out hope that they’ll get back together?
The breakup is going to stick for now. That doesn’t mean that there won’t be little bits of follow-up, and certainly their history plays a subtext in their [working] relationship and everything that they do.

What did you think of The Good Doctor Season 3, Episode 9? And what are your hopes for the Dec. 2 fall finale? Sound off in the comments.